Burridge2014. Contained Mobility_part1. Transforming Border Geographies in a Mobile Age. Borders constitute a prism through which to examine how contemporary social, cultural, economic, and political processes impact our lives. 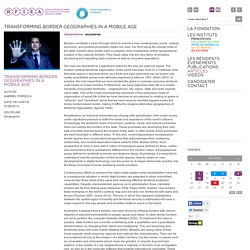 Far from being the remote limits of the state, borders play central roles in peoples’ lives irrespective of their geographical location in the national territory. They reach deep into the very fabric of societies, structuring and regulating daily routines as well as long-term aspirations. Our lives are structured to a significant extent by the way we organize space. The modern political-territorial organization of the world has been built on a Cartesian view that sees space in absolute terms, as a finite and rigid object that can be broken into neatly quantifiable pieces and rationally explained (Lefebvre 1991; Elden 2007). In practice, this had meant that we have divided the globe in mutually exclusive territorial units based on linear borders. Much work remains to be done to tackle the fuzzy geographies of borders in globalization. References. VERS UN ANTI-ATLAS DES FRONTIERES : ANTIATLAS DES FRONTIÈRES. 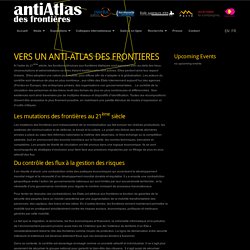 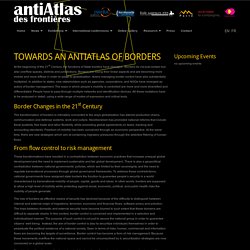 Borders do not just contain but also overflow spaces, districts and jurisdictions. Borders are losing their linear aspects and are becoming more mobile and more diffuse in order to adapt to globalisation. Actors managing border control have also substantially multiplied. In addition to states, new stakeholders such as agencies, corporations, and NGOs have emerged as actors of border management. The ways in which people’s mobility is controlled are more and more diversified and differentiated. Border Changes in the 21st Century The transformation of borders is intimately connected to the ways globalization has altered productive chains, communication and defense systems, work and culture. From flow control to risk management The objective of border securitization is less to fully close these flows than to improve the mechanisms to filter them.

Environment and Planning D abstract. Living on the Electromagnetic Border. A golfer hits a tee shot as African migrants sit atop a border fence during an attempt to cross into Spanish territories between Morocco and Spain’s north African enclave of Melilla, October 22, 2014. 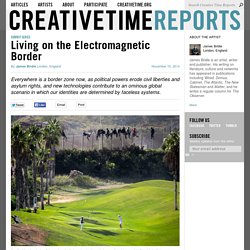 Photo by José Palazon/REUTERS. In 2010 U.S. Customs and Border Protection agents at the Canadian border stopped an American student on his way home to Brooklyn. Pascal Abidor was returning from McGill University in Montreal, where he was working on his Ph.D. Unfortunately for him, his doctorate is in Islamic Studies, and when the officers asked him to open his laptop and type in his password, they found images of Hamas and Hezbollah rallies, collected as part of his research into modern Lebanese Shiism. Some 200 million Americans actually live in de jure border zones, subject to an almost complete exemption from the Fourth Amendment The subsequent court battle, which the ACLU lost, resulted in a ruling with consequences that were literally far-reaching. 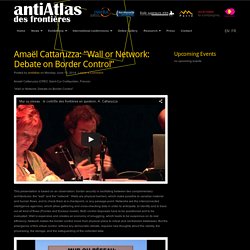 Walls are physical barriers, which make possible to canalize material and human flows, and to check them at a checkpoint, or any passage-point. Networks are the interconnected intelligence agencies, which allow gathering and cross-checking data in order to anticipate, to identify and to trace out all kind of flows (Frontex and Eurasur model). Inside the prison system's illicit digital world. In this three-part Tech Behind Bars series, we’re exploring the points of intersection between digital culture and America’s correctional system. 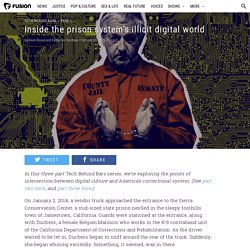 (See part two here, and part three here.) On January 2, 2014, a vendor truck approached the entrance to the Sierra Conservation Center, a mid-sized state prison nestled in the sleepy foothills town of Jamestown, California. Guards were stationed at the entrance, along with Duchess, a female Belgian Malinois who works in the K-9 contraband unit of the California Department of Corrections and Rehabilitation. As the driver waited to be let in, Duchess began to sniff around the rear of the truck.