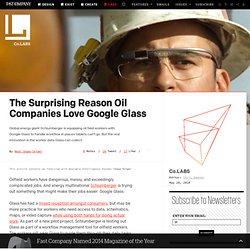 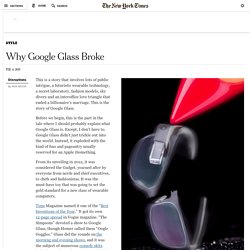 Reflections on Google Glass — D-RAD. Where Next? 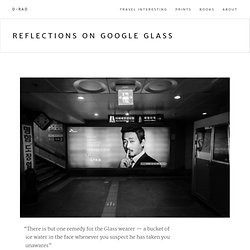 This essay starts with a paraphrasing a quote - here is the original in full: “There is but one remedy for the amateur photographer. Put a brick through his camera whenever you suspect he has taken you unawares”. It could be written about Glass today but is in fact taken from September 18th 1885 edition of Amateur Photographer magazine [9], seven years after the introduction of dry plates a technology that supported far more surreptitious photography. The full article by Bill Jay is worth reading in full. The same article contains another quote from Amateur Photographer, twenty five years later, when cameras were becoming less noticeable: “Our moral character dwindles as our instruments get smaller”.

Google's Glass Castle: The Rise and Fear of a Transhuman Future. Terrifying Tech? 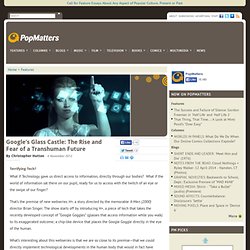 What if Technology gave us direct access to information, directly through our bodies? What if the world of information sat there on our pupil, ready for us to access with the twitch of an eye or the swipe of our finger? That’s the premise of new webseries H+, a story directed by the memorable X-Men (2000) director Brian Singer. The show starts off by introducing H+, a piece of tech that takes the recently developed concept of “Google Goggles” (glasses that access information while you walk) to its exaggerated outcome; a chip-like device that places the Google Goggle directly in the eye of the human.

Julian0liver : FYI Google Glass MAC (hw) address... Google Glass in 10 years: The view from dystopia. Recently Google announced it was launching a quantum artificial intelligence lab with a company associated with NASA, while, at its developer conference, it talked up seven new apps for Google Glass, the soon-to-be-available smartphone-on-a-face. 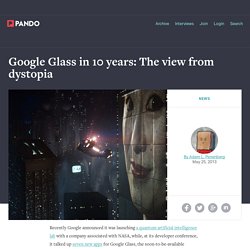 The fact that the announcements came on the same day is, I’m sure, a coincidence, but it got me thinking. Combine quantum computing with hands free-mobile devices and in, say, a decade, the lens through which we view the world could be decidedly different. Today’s computers, with their binary approach to problem solving, look at things in simplistic terms. They grapple with information through bits, which by definition have one of two values: yes, no; plus, minus; 0 or 1 – hence the term “digital.” Quantum computers rely on quantum bits, or qubits that can be simultaneously on and off and perform many functions at once. I imagine it could be something like this. What’s more, the colors of your world through these lenses are supersaturated. Google Glass: Don't Be A Glasshole. Google Glass Picks Up Early Signal - Keep Out. Muzzle Flash — Hidden in Plain Sight. There are many people who are exploring what Glass could be, evaluating and providing feedback to Google, exposing and conditioning their networks to the idea of Glass as a viable part of the technology landscape. 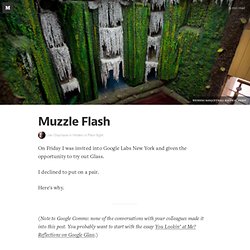 The selection criteria for being a Glass explorer/evaluator/shill* has been as carefully thought out as any part of the bring-Glass-to-market process. Many early adopters are willing to pay to get their hands on Glass. Others will be paid (in kind or in cash) for providing feedback and related services to the Glass team - and I'll be interested to know how many of those will reveal their consultant relationship when they talk about Glass publicly. While targeting trend and thought leaders, early adopters and legislatures is not novel, few projects or companies have such deep pockets to do so as comprehensively with such a disruptive product.

In most situations I'd jump at the chance to try Glass out. Go figure. Thanks to Matt for the invite and the Google team for hosting. Thoughts After a Week with Google Glass. A year ago I signed up to get early access to Google Glass. 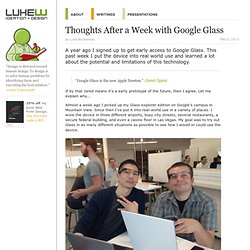 This past week I put the device into real world use and learned a lot about the potential and limitations of this technology. Glasshole. Privacy 'impossible' with Google Glass warn campaigners. 26 March 2013Last updated at 08:06 ET Widespread use of Google Glass could stifle freedom in civil society, campaigners warn Google Glass and other augmented reality gadgets risk creating a world in which privacy is impossible, warn campaigners. 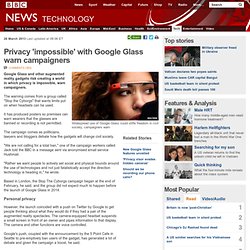 The warning comes from a group called "Stop the Cyborgs" that wants limits put on when headsets can be used. It has produced posters so premises can warn wearers that the glasses are banned or recording is not permitted. The campaign comes as politicians, lawyers and bloggers debate how the gadgets will change civil society. "We are not calling for a total ban," one of the campaign workers called Jack told the BBC in a message sent via anonymised email service Hushmail. "Rather we want people to actively set social and physical bounds around the use of technologies and not just fatalistically accept the direction technology is heading in," he wrote. Personal privacy Stop The Cyborgs wants to spark debate about the use of augmented reality headsets. Strange Days, Indeed. Have you ever jacked in? 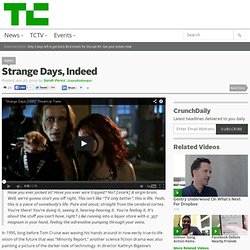 Have you ever wire tripped? No? [smirk] A virgin brain. Well, we’re gonna start you off right. This isn’t like “TV only better”, this is life. In 1995, long before Tom Cruise was waving his hands around in now eerily true-to-life vision of the future that was “Minority Report,” another science fiction drama was also painting a picture of the darker side of technology. Greg Vincent's answer to Google Glass: What are some potential solutions to issues regarding Google Glass and privacy. “Stop the Cyborgs” launches public campaign against Google Glass.

Less than two weeks ago, Seattle’s 5 Point Cafe became the first known establishment in the United States (and possibly the world) to publicly ban Google Glass, the highly anticipated augmented reality device set to be released later this year. 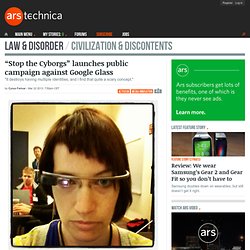 Thirty-Five Arguments Against Google Glass. Google Glass is a snazzy set of specs that will part the Red Sea if you tap it from the right angle. It aims to fuse smartphones and computers into a hands-free user experience more pleasurable than sex, religion, and world domination combined. Glass is not yet on the market, but the news of its existence cut a hew through Mountain View with the strident fife of an unpaid piper wooing unsuspecting kids into a dark cave.

It inspired Google co-founder Sergey Brin to publicly announce that he felt less male with the thick tools that came before. Some wondered why Brin didn’t just hold hard to his smartphone and slam down shots every Friday night like the rest of America. But when your net worth is $23 billion, different rules apply. Brin was good enough to describe his new instrument to the Wall Street Journal last September: They are, uh, a new form of computing, uh, that’s designed to really free you. MONSTRO 10 Best Handheld Mobile Jammer, Cell phone blocker. MONSTRO 10 best handheld mobile jammer works with all frequency bands used by the wireless devices around you except low frequencies and 4G band. When you have such device in your hands, there is almost nothing that can hurt your privacy or break the secrecy of your location within 15 meters radius around you. Even the most advanced tracking, eavesdropping, wiretapping and other anti privacy technologies are unable to work properly when they are in the working range of this product.

The Google Glass feature no one is talking about — Creative Good. (Also: en français, en español, 简体中文, 繁體中文, На русском, in het nederlands, em Português) Google Glass might change your life, but not in the way you think. There’s something else Google Glass makes possible that no one – no one – has talked about yet, and so today I’m writing this blog post to describe it. To read the raving accounts of tech journalists who Google commissioned for demos, you’d think Glass was something between a jetpack and a magic wand: something so cool, so sleek, so irresistible that it must inevitably replace that fading, pitifully out-of-date device called the smartphone.

Sergey Brin himself said as much yesterday, observing that it is “emasculating” to use a smartphone, “rubbing this featureless piece of glass.” His solution to that piece of glass, of course, is called Glass. The Borg Complex Case Files. UPDATE: See the Borg Complex primer here. “Resistance is futile.” This is what the Borg, of Star Trek fame, announces to its victims before it proceeds to assimilate their biological and technological distinctiveness.

It is also what many tech gurus and pundits announce to their audiences as they dispense their tech-guru-ish wisdom. They don’t quite use those words,of course, but they might as well. This is why I’ve taken to calling this sort of rhetoric a Borg Complex. I first wrote about the Borg Complex last June in response to an article on technology and religion which confidently announced that “religion will have to adapt.” Stop The Cyborgs.