Celestial Sphere and Seasons Terms Flashcards. Earth's Moon – NASA Solar System Exploration. What is the Current Phase of the Moon? 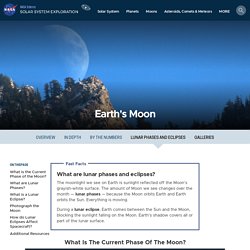 What is the Current Phase of the Moon? What are Lunar Phases? What Are Lunar Phases? Our Moon doesn't shine, it reflects. Just like daytime here on Earth, sunlight illuminates the Moon. We just can't always see it. When sunlight hits off the Moon's far side — the side we can't see without from Earth the aid of a spacecraft — it is called a new moon.

When sunlight reflects off the near side, we call it a full moon. Space Sciences Printables, Activities, and Lessons. These printables, lessons, and activities for space sciences are out of this world! 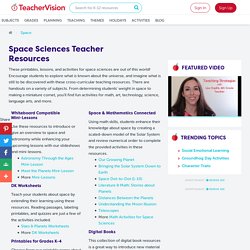 Encourage students to explore what is known about the universe, and imagine what is still to be discovered with these cross-curricular teaching resources. There are handouts on a variety of subjects. From determining students' weight in space to making a miniature comet, you'll find fun activities for math, art, technology, science, language arts, and more. Whiteboard Compatible Mini-Lessons Use these resources to introduce or give an overview to space and astronomy while enhancing your upcoming lessons with our slideshows and mini-lessons. DK Worksheets Teach your students about space by extending their learning using these resources.

Printables for Grades K-4. Solar System and Planets Worksheets. Cut out the picture cards and sort them into two categories: planets and not planets. 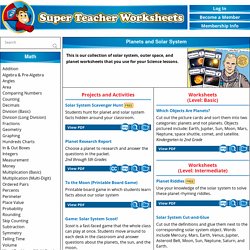 Objects pictured include: Earth, Jupiter, Sun, Moon, Mars, Neptune, space shuttle, comet, and satellite. Kindergarten to 2nd Grade Worksheets(Level: Intermediate) Use your knowledge of the solar system to solve these planet rhyming riddles. Cut out the definitions and glue them next to the corresponding solar system object. Earth & Space Science Worksheets & Free Printables. Astronomy Simulations and Animations. Stellar evolution Flashcards. Bright Stars Worth Knowing. Stars Worth Knowing. Distances: Crash Course Astronomy #25. Zodiac signs shift: here's your new (and correct) horoscope. If you’re struggling to make sense of this bombshell (and why wouldn’t you?) 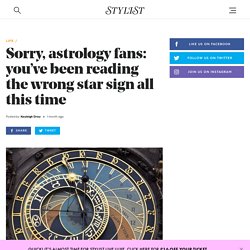 , it’s all very simple when you break it down. Essentially, the date that fixes our star sign corresponds to the position of the Sun relative to constellations of stars appearing behind the Sun on our birth date. The position of the Sun as it’s perceived from the revolving Earth passes through the constellations that formed the zodiac - Aries, Taurus, Gemini, Cancer, Leo, Virgo, Libra, Scorpio, Sagittarius, Capricorn, Aquarius and Pisces. Zodiac signs were originally determined by which constellation the Sun was ‘in’ on the day we were born.

But in the more than 3000 years since our zodiac system was invented, constellations have drifted and the sky has changed. So while we might consider ourselves to be a well-balanced Libra, or a headstrong Aries, or a “total Gemini”, that is most likely not the case. Cosmos: Star Maps of the Constellations as seen in the Northern Skies of Earth. Sky maps help us find out which constellations are visible in the night sky during the year as the Earth revolves around our sun. 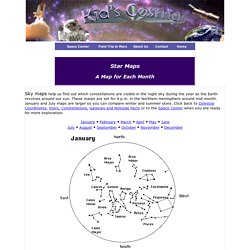 These marps are set for 9 p.m. in the Northern Hemisphere around mid-month. January and July maps are larger so you can compare winter and summer skies. Click back to Celestial Coordinates, Stars, Constellations, Galaxies and Nebulae Facts or to the Space Center when you are ready for more exploration. January • February • March • April • May • June July • August • September • October • November • December Kids' Cosmos… Expanding Minds Beyond the Limits of the Universe. A Guide to Asterisms - The Unofficial Constellations. The most famous asterism is the plough or big dipper. 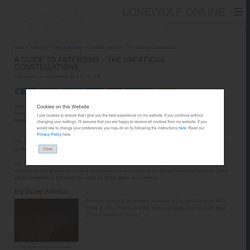