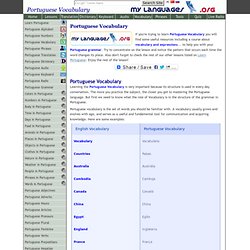 The more you practice the subject, the closer you get to mastering the Portuguese language. But first we need to know what the role of Vocabulary is in the structure of the grammar in Portuguese. Portuguese vocabulary is the set of words you should be familiar with. A vocabulary usually grows and evolves with age, and serves as a useful and fundamental tool for communication and acquiring knowledge. Portuguese for Beginners. By Luís Romão (Unilang) Portuguese is spoken in all continents by more than 200 million people, being the official language of Portugal, Brazil, Cape Verde, Guinea-Bissau, São Tomé and Príncipe, Angola, Mozambique and East-Timor. 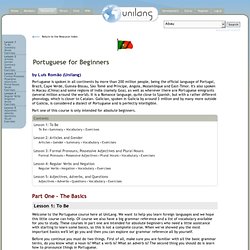 It's also spoken in Macau (China) and some regions of India (namely Goa), as well as wherever there are Portuguese emigrants (several million around the world). It is a Romance language, quite close to Spanish, but with a rather different phonology, which is closer to Catalan. Galician, spoken in Galicia by around 3 million and by many more outside of Galicia, is considered a dialect of Portuguese and is perfectly intelligible. Brazilian Portuguese Phrases, Phrases in Portuguese.