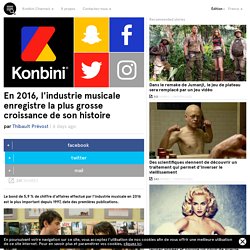 Un changement de paradigme économique enfin parvenu à maturité, tandis que les ventes physiques continuent leur lente agonie, en perdant encore 7,6 %. Science, data, culture et galéjades. How Blockchain Can Change the Music Industry (Part 2) — Rethink Music. With every .bc having its own fingerprint, it makes all of the above searchable and accessible to all in the blockchain, while still giving rights holders control over permissions and changes to basic rights through smart contracts. 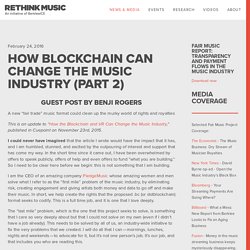 Being able to track changes in ownership and permissions in near real time is not only possible under this architecture, but will allow for new and enhanced uses for music across the digital ecosystem. 3. Digital Rights Management or DRM is really bad! This has perhaps been the biggest issue I have encountered since this idea was proposed. It seems that DRM has created more than a few casualties! I am therefore calling this Digital Rights Expression, as none of what is proposed here is designed to limit possibilities. The global music copyright business is worth more than you think - and grew by nearly $1bn last year.

How much is the global music business really worth? 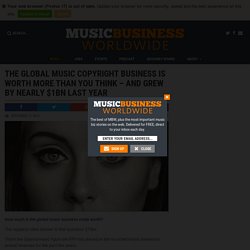 The regularly-cited answer to that question: $15bn. That’s the (approximate) figure the IFPI has placed on the recorded music business’s annual revenues for the past few years. In 2016, according to early estimates, that figure looks likely to rise up towards $16bn. How Spotify helped me as an artist – MUSIC x TECH x FUTURE – Medium. Last year I spent almost every day in my small home studio. 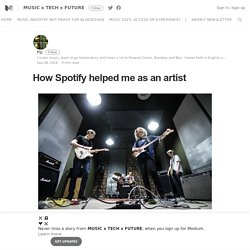 Writing songs, recording songs. I was learning everything. Learning to play the guitar, learning the skills of songwriting, learning how to record and how to mix. This year I decided to release my first 4 songs. Every week of February one track. To be honest I had no expectations. But immediately something happened. Fresh Finds = Early Adoption Spotify’s official Fresh Finds playlists, now widely known, were unknown when I started. The music business: Change of tune. IT WAS an eventful summer in the business of streaming music. 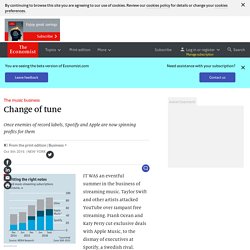 Taylor Swift and other artists attacked YouTube over rampant free streaming. Frank Ocean and Katy Perry cut exclusive deals with Apple Music, to the dismay of executives at Spotify, a Swedish rival. Behind the scenes, Pandora, a radio-like service, and Amazon, an e-commerce giant, stepped up their efforts to take on Spotify and Apple. Then last month Spotify began talks to buy SoundCloud, another streaming firm. All this drama obscures two emerging realities. But American record labels and music publishers are now on track for a second consecutive year of growth. Most of that rebound is due to growth in subscription-streaming revenues. The second reality is that since Spotify and Apple have close to two-thirds of the world’s nearly 90m paying subscribers to streaming services, they are the ones shaping the future.

Hogging the mic As a result, music companies are keenly watching what Apple Music and Spotify might do next. ARTISTS VS SONGS : BUILDING IDENTITY IN A STREAMING ERA - PART I — Rethink Music. Guest post by Nick Susi, creative strategist in music & media Entering 2017, a popular topic of conversation has been focused on streaming’s impact on the music industry. 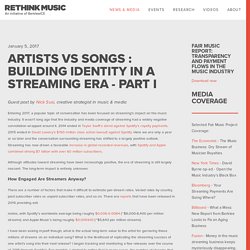 It wasn’t long ago that the industry and media coverage of streaming had a widely negative connotation wrapped around it. 2014 ended in Taylor Swift’s stand against Spotify’s royalty payments. 2015 ended in David Lowery’s $150 million class action lawsuit against Spotify. Here we are only a year or so later and the conversation surrounding streaming has shifted to a largely positive outlook. Sony Music earned $1.2bn from streaming platforms in 2016. TIDAL sells 33% stake for $200m to Softbank-owned telco Sprint. Well, well, well. 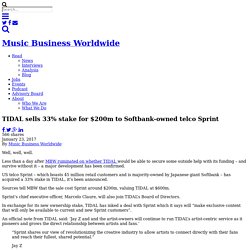 Less than a day after MBW ruminated on whether TIDAL would be able to secure some outside help with its funding – and survive without it – a major development has been confirmed. US telco Sprint – which boasts 45 million retail customers and is majority-owned by Japanese giant Softbank – has acquired a 33% stake in TIDAL, it’s been announced. Sources tell MBW that the sale cost Sprint around $200m, valuing TIDAL at $600m. Sprint’s chief executive officer, Marcelo Claure, will also join TIDAL’s Board of Directors. In exchange for its new ownership stake, TIDAL has inked a deal with Sprint which it says will “make exclusive content that will only be available to current and new Sprint customers”.

An official note from TIDAL said: ‘Jay Z and and the artist-owners will continue to run TIDAL’s artist-centric service as it pioneers and grows the direct relationship between artists and fans.’ Global recorded music industry reached $16.1bn in 2016 - up 7% YoY. The global recorded music industry grew $1.1 billion in 2016 to reach $16.1 billion—the largest growth its seen in over 15 years. 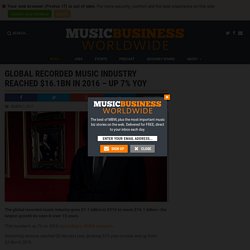