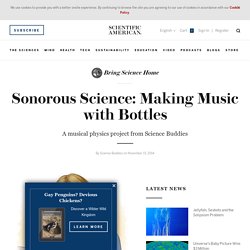 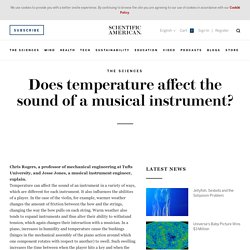 Temperature can affect the sound of an instrument in a variety of ways, which are different for each instrument. It also influences the abilities of a player. In the case of the violin, for example, warmer weather changes the amount of friction between the bow and the strings, changing the way the bow pulls on each string. Warm weather also tends to expand instruments and thus alter their ability to withstand tension, which again changes their interaction with a musician. In a piano, increases in humidity and temperature cause the bushings (hinges in the mechanical assembly of the piano action around which one component rotates with respect to another) to swell. Some musicians are convinced that cooling an instrument to extreme temperatures can change its tone as well.

Forced Vibration. Musical instruments and other objects are set into vibration at their natural frequency when a person hits, strikes, strums, plucks or somehow disturbs the object. 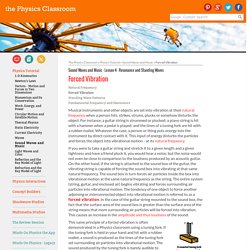 For instance, a guitar string is strummed or plucked; a piano string is hit with a hammer when a pedal is played; and the tines of a tuning fork are hit with a rubber mallet. Whatever the case, a person or thing puts energy into the instrument by direct contact with it. This input of energy disturbs the particles and forces the object into vibrational motion - at its natural frequency. Sound Science: Do-Re-Mi with Straws. Key concepts Sound Music Physics Sound waves Frequency Introduction Have you ever wondered how a musical instrument produces the beautiful sounds that it does? 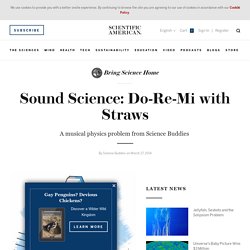 It all comes down to science! To make a certain note, the instrument has to generate a particular-sized sound wave. So what you hear as pitch is really just a collection of similarly sized sound waves moving through the air and hitting your ear. Sound. The Next Generation of Silent Submarines Could Defeat Radar and Sonar Sensing. How is sound used to locate fish? – Discovery of Sound in the Sea. Technology: Observation Tools: SONAR. A side-scan sonar image of the passenger freighter Robert E. 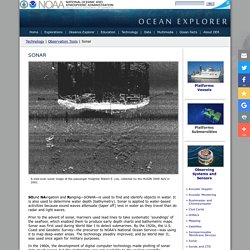 Lee, collected by the HUGIN 3000 AUV in 2001. Bats crash into windows because of a glitch with their 'sonar' Imagebroker/Rex/Shutterstock By Michael Le Page Windows are traps for fast-flying bats. 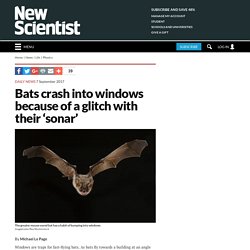 As bats fly towards a building at an angle making echolocating clicks, the lack of echoes that come back from smooth vertical surfaces makes them appear as gaps. U.S. Navy to limit sonar testing to protect whales. The U.S. 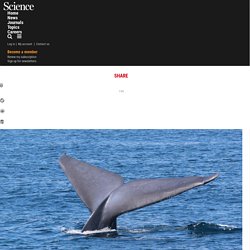 Navy agreed this week to limit its use of sonar and other activities that unintentionally harm cetaceans and other marine mammals. A federal court on 14 September approved the settlement of two cases brought by environmental groups that challenged the Navy’s training and testing activities off the coasts of southern California and Hawaii. The settlement comes in the wake of the court’s decision earlier this year that found the Navy’s exercises in these areas were illegally harming numerous populations of whales, dolphins, seals, and sea lions. Does Military Sonar Kill Marine Wildlife? 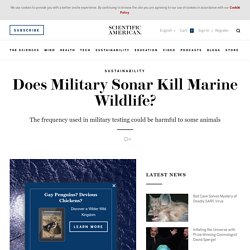 -- John Slocum, Newport, RI Unfortunately for many whales, dolphins and other marine life, the use of underwater sonar (short for sound navigation and ranging) can lead to injury and even death. Sonar systems—first developed by the U.S. Science Wire: How Does Sonar Work? Whales and Sonar. What is sonar? Sonar, short for Sound Navigation and Ranging, is helpful for exploring and mapping the ocean because sound waves travel farther in the water than do radar and light waves. 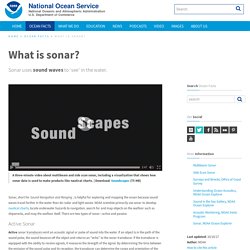 NOAA scientists primarily use sonar to develop nautical charts, locate underwater hazards to navigation, search for and map objects on the seafloor such as shipwrecks, and map the seafloor itself. Study Finds Brain Hub That Links Music, Memory and Emotion. The science of why music improves our memory and verbal intelligence. By Amy Spray By Amy Spray July 21, 2015. 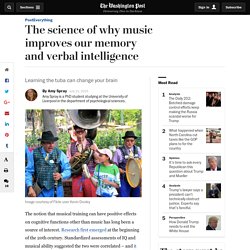 The Surprising Science Behind What Music Does To Our Brains. I’m a big fan of music, and use it a lot when working, but I had no idea about how it really affects our brains and bodies. Since music is such a big part of our lives, I thought it would be interesting and useful to have a look at some of the ways we react to it without even realizing. “Without music, life would be a mistake” –Friedrich Nietzsche Of course, music affects many different areas of the brain, as you can see in the image below, so we’re only scratching the surface with this post, but let’s jump in. I Second that Emotion: The Emotive Power of Music in Advertising. Music is powerful. It can make us smile or cry, bring memories rushing back, and even inspire us to buy a product when it’s combined with the right advertisement. A recent study from Nielsen looked at effectiveness of more than 600 television advertisements, more than 500 of which included music.

The research indicated that commercials with some form of music performed better across four key metrics—creativity, empathy, emotive power, and information power—than those that didn’t. What Is it About Music That Triggers All of These Emotions? Why Does Music Make Us Feel? As a young man I enjoyed listening to a particular series of French instructional programs. I didn’t understand a word, but was nevertheless enthralled. Was it because the sounds of human speech are thrilling? Not really. Speech sounds alone, stripped of their meaning, don’t inspire.

We don’t wake up to alarm clocks blaring German speech. But music does emanate from our alarm clocks in the morning, and fill our cars, and give us chills, and make us cry. The researchers found that music powerfully influenced the emotional ratings of the faces. Michael Tilson Thomas: Music and emotion through time. Julian Treasure: The 4 ways sound affects us.

Music & How It Impacts Your Brain, Emotions. Sound Waves Can Heal Brain Disorders. The brain is protected by formidable defenses. In addition to the skull, the cells that make up the blood-brain barrier keep pathogens and toxic substances from reaching the central nervous system. The protection is a boon, except when we need to deliver drugs to treat illnesses. Sound Waves Could Speed Up Wound Healing. Untitled. Sound healing: discovering a new way path to complete relaxation  Glasses Are Cool. Why Aren’t Hearing Aids? Why Are Hearing Aids So Expensive? Hearing. 4 Game-Changing Technologies For The Deaf And Hard Of Hearing. Researchers devise method for regenerating hair cells to help reverse hearing loss. As we age, the hair cells in our ears — like the rest of us — slowly die (how’s that for a bummer of an opening). That damage to the approximately 15,000 hair cells per ear, which can be exacerbated by loud noise and some medication, is a leading factor contributing to hearing loss.

Headphone Technology That Actually Helps Hearing Loss. Economist. A Drug Treatment for Hearing Loss. By Anne Trafton April 25, 2017 Pictured on right, clonal colonies of cochlear progenitor cells. Within the inner ear, thousands of hair cells detect sound waves and translate them into nerve signals that allow us to hear speech, music, and other everyday sounds. Damage to these cells is one of the leading causes of hearing loss, which affects 48 million Americans. How Your Apple Wireless Earbuds Could Double as Hearing Aids. What if a hearing aid could be replaced with a pair of wireless earbuds and a smartphone app? A Swiss startup is trying to make this reality with an app called Fennex, recently released for the iPhone, that works with Apple’s $159 AirPods wireless earbuds. Alex Mari, CEO of the startup of the same name, says that he chose Apple’s devices and mobile platform for the app in part because of their popularity, but also because he thinks an Android phone would result in more latency when processing sound.

The Fennex app, currently free though it may eventually charge for certain features, is still in its earliest days. Technology that can help millions with hearing loss. Some researchers are looking into fixing the mutation itself through gene therapy. In experiments, the altered gene is delivered to the relevant cells using a modified virus. That sounds simple enough, but the reality is much more complicated — there are hundreds of genetic mutations that can cause deafness, so researchers have to make sure they're targeting the right ones and that they're doing it in the right cells.