Religion and Religious Figures in the Renaissance

Copernicus and the Church: What the history books don't say. Legend has it that Nicolaus Copernicus and the church were at odds over his development of the heliocentric theory, a principle that disputed the widely held belief that Earth was the center of the universe. 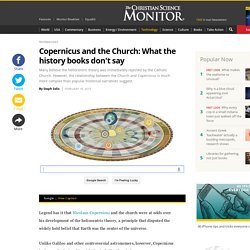 Unlike Galileo and other controversial astronomers, however, Copernicus had a good relationship with the Catholic Church. It may come as a surprise, considering the Church banned Copernicus' "Des revolutionibus" for more than 200 years. The Role of Religion in the Scientific Revolution - The Objective Standard. Harry Elkins Widener Collection - Houghton Library. Harry Elkins Widener Collection The Gutenberg Bible Biblia Latina, [the “Gutenberg Bible”]. 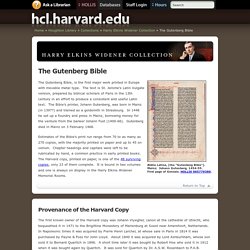 Mainz: Johann Gutenberg, 1454-55. First page of Genesis. HOLLIS 005779380. Medici: Godfathers of the Renaissance . Renaissance . Heresy. By the turn of the 15th century, the Catholic Church was divided and in chaos. 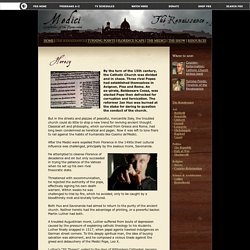 Three rival Popes had established themselves in Avignon, Pisa and Rome. An ex-pirate, Baldassare Cossa, was elected Pope then defrocked for corruption and fornication. The reformer Jan Hus was burned at the stake for daring to question the conduct of the church. But in the streets and piazzas of peaceful, mercantile Italy, the troubled church could do little to stop a new trend for reviving ancient thought. Medici: Godfathers of the Renaissance . Renaissance . Counter Reformation. Throughout the middle ages the Catholic Church sunk deeper into a pit of scandal and corruption. 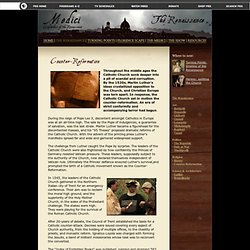 By the 1520s, Martin Luther's ideas crystallized opposition to the Church, and Christian Europe was torn apart. In response, the Catholic Church set in motion the counter-reformation. An era of strict conformity and accompanying terror had begun. During the reign of Pope Leo X, discontent amongst Catholics in Europe was at an all-time high. The sale by the Pope of indulgences, a guarantee of salvation, was the last straw. Log In. Luther’s pamphlets were distributed at markets and taken by cart to other cities and read aloud publicly for those unable to read, Dr. 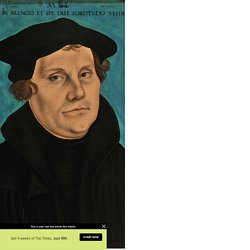 Emmerling said. “We like to say if Martin Luther was alive today, he would use Twitter,” she added. Many works on view are from the workshop of Lucas Cranach the Elder, an artist who was Luther’s neighbor and friend and with whom he frequently collaborated. “The ideas of the Reformation happened because of Luther’s words, and because of all the imagery that went along with it,” said Dr. McQuillen of the Morgan. Ninety-five Theses. Martin Luther posts 95 theses - Oct 31, 1517. Also on this day American Revolution On this day in 1776, in his first speech before British Parliament since the leaders of the American Revolution came together to sign of the Declaration of Independence that summer, King George III acknowledges that all was not going well for Britain in the war with the United States. 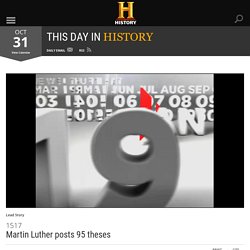 Book of Concord. Disputation of Doctor Martin Luther on the Power and Efficacy of Indulgences by Dr. 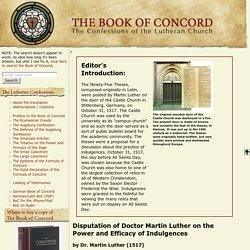 Martin Luther (1517) Published in: Martin Luther and the 95 Theses - Facts & Summary. Committed to the idea that salvation could be reached through faith and by divine grace only, Luther vigorously objected to the corrupt practice of selling indulgences. 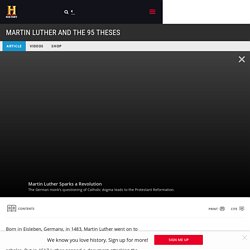 Acting on this belief, he wrote the “Disputation on the Power and Efficacy of Indulgences,” also known as “The 95 Theses,” a list of questions and propositions for debate. Popular legend has it that on October 31, 1517 Luther defiantly nailed a copy of his 95 Theses to the door of the Wittenberg Castle church. German religious leader. Luther, Martin. German theologian, professor, pastor, and church reformer. 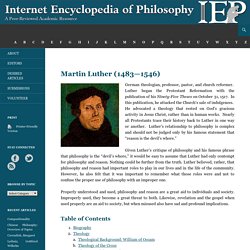 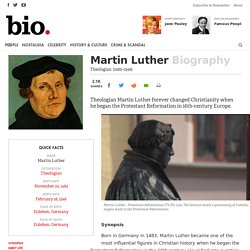 Synopsis Born in Germany in 1483, Martin Luther became one of the most influential figures in Christian history when he began the Protestant Reformation in the 16th century. He called into question some of the basic tenets of Roman Catholicism, and his followers soon split from the Roman Catholic Church to begin the Protestant tradition. Early Life.