Polio then and now: the story of a crippling disease on the verge of worldwide eradication. Polio-like illness, acute flaccid myelitis, confirmed in 9th child in Washington state. A boy in Spokane County, Washington, is the ninth person in the state with a confirmed case of a rare syndrome that can cause varying degrees of paralysis. 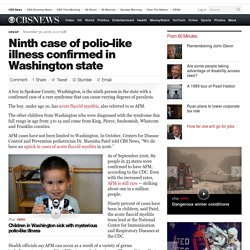 The boy, under age 10, has acute flaccid myelitis, also referred to as AFM. The other children from Washington who were diagnosed with the syndrome this fall range in age from 3 to 14 and come from King, Pierce, Snohomish, Whatcom and Franklin counties. AFM cases have not been limited to Washington. In October, Centers for Disease Control and Prevention pediatrician Dr. Polio survivors race against the clock. Emanuel Poznanski had 21 surgeries in the first 16 years of his life. 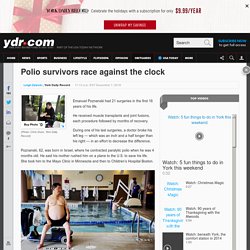 He received muscle transplants and joint fusions, each procedure followed by months of recovery. During one of his last surgeries, a doctor broke his left leg — which was an inch and a half longer than his right — in an effort to decrease the difference. Poznanski, 62, was born in Israel, where he contracted paralytic polio when he was 4 months old. He said his mother rushed him on a plane to the U.S. to save his life. She took him to the Mayo Clinic in Minnesota and then to Children’s Hospital Boston. In his earliest memories, hospitals were his home. “I never realized I was handicapped,” Poznanski said. He’s thankful for that.

About 25 percent of his muscle had been destroyed by the disease. In 1964, when Poznanski was 14, his family moved to York County, where he attended York Suburban High School. “It was the most formative time in my life,” Poznanski said of living here. “We’re dying off,” Poznanski said. The forgotten story of … Jeff Hall, the footballer whose death turned tide against polio. On the face of it there was nothing particularly memorable about Birmingham City’s 1-1 draw at relegation-bound Portsmouth in March 1959 but for the sense of disappointment the visitors took from it. 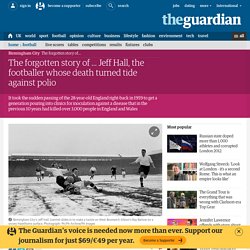 “Blues did themselves no credit in this so-casual stroll in the sun,” wrote Dennis Shaw in Birmingham’s Sports Argus. “Portsmouth did all they could to show why they have not won a league game since November. Blues were little better. After shooting into the lead shortly before the interval they just hadn’t the skill, and the drive, nor the determination to run up a hefty total. Eradicating Polio. We are closer than ever to ending polio. 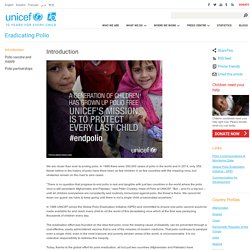 In 1988 there were 350,000 cases of polio in the world and in 2014, only 359. Never before in the history of polio have there been so few children in so few countries with the crippling virus, but obstacles remain on the road to zero cases. “There is no question that progress to end polio is real and tangible with just two countries in the world where the polio virus is still persistent: Afghanistan and Pakistan,” said Peter Crowley, head of Polio at UNICEF.

“But – and it’s a big but – until all children everywhere are consistently and routinely immunized against polio, the threat is there. We cannot let down our guard; we have to keep going until there is not a single child unvaccinated anywhere.” Bruce Aylward: How we'll stop polio for good. Polio is back in Nigeria, and the next vaccination campaign may have a surprising consequence. By Shelby Grossman, Jonathan Phillips and Leah RosenzweigAugust 23 A health official administers a polio vaccine to a child in Kawo Kano, Nigeria, in 2014. 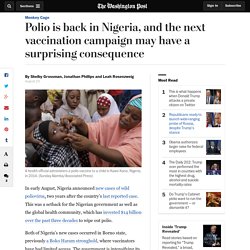 (Sunday Alamba/Associated Press) In early August, Nigeria announced new cases of wild poliovirus, two years after the country’s last reported case. This was a setback for the Nigerian government as well as the global health community, which has invested $14 billion over the past three decades to wipe out polio. Both of Nigeria’s new cases occurred in Borno state, previously a Boko Haram stronghold, where vaccinators have had limited access. This boy could be one of the world&apos;s last victims of polio.

Khaksar’s family knew something was wrong when his fever didn’t break. 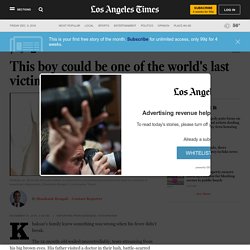 The 12-month-old wailed uncontrollably, tears streaming from his big brown eyes. His father visited a doctor in their lush, battle-scarred valley in eastern Afghanistan. But the pills he brought home did nothing. After a week, the family bundled Khaksar into a taxi and rode for an hour and a half to the small hospital in Asadabad. Polio Disease: Vaccine, Symptoms & Causes. On the Brink of Eradicating Wild Polio, Nigeria Suffers an Outbreak of the Virus. August 11, 2016, was supposed to be a historic day for the global effort to eradicate the polio virus. 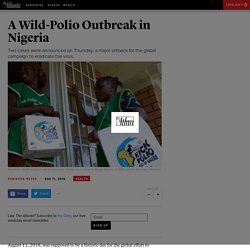 This Thursday would have marked two years since someone on the African continent last contracted the wild-polio virus. If the continent made it without a case for a third year, the World Health Organization could have certified it as polio-free, and Africa would have joined four other WHO regions—the Americas, Europe, the Western Pacific, and South-East Asia—in eradicating wild polio. But it is not to be. Nigerian health officials announced on Thursday, the same day they expected to celebrate the anniversary, that two children have been paralyzed by wild polio in the country’s northeastern Borno State.

“It has set us back,” said Isaac Adewole, the Nigerian health minister, according to the Nigerian newspaper Leadership. A Science Odyssey: On The Edge: Paralyzing Polio: 1 of 9. Text version of Paralyzing PolioHome | On the Edge Menu | People and Discoveries | Printable Version | HelpWGBH | PBS Online | Search | Feedback | Shop© 1998 WGBH. 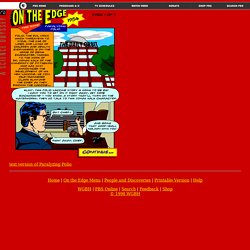 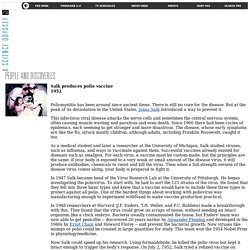 There is still no cure for the disease. But at the peak of its devastation in the United States, Jonas Salk introduced a way to prevent it. This infectious viral disease attacks the nerve cells and sometimes the central nervous system, often causing muscle wasting and paralysis and even death. Since 1900 there had been cycles of epidemics, each seeming to get stronger and more disastrous. Polio: Causes, Symptoms, and Vaccines. Polio, also known as poliomyelitis and infantile paralysis, is a highly contagious viral infection that can lead to paralysis, breathing problems, or even death. 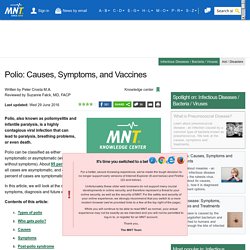 Polio can be classified as either symptomatic or asymptomatic (with or without symptoms). About 95 percent of all cases are asymptomatic, and 4-8 percent of cases are symptomatic. Disease Directory. What is polio? Polio is a disease caused by a virus that affects the nervous system and is mainly spread by person-to-person contact. Polio can also be spread by drinking water or other drinks or eating raw or undercooked food that are contaminated with the feces of an infected person.

Top of Page Beliefs & Concerns. Vaccines: VPD-VAC/Polio/main page. One of the Recommended Vaccines by Disease Polio is an infectious disease caused by a virus that lives in the throat and intestinal tract. It is most often spread through person-to-person contact with the stool of an infected person and may also be spread through oral/nasal secretions. Polio and Post-Polio Syndrome: MedlinePlus. Poliomyelitis. Polio. Listen. Poliomyelitis (polio)