Mosquitoes and Malaria: Taking a Big Step Against a Small but Deadly Foe. If you’ve ever swatted away a mosquito on a muggy summer night, then you know how annoying these winged pests can be. 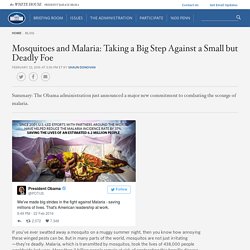 But in many parts of the world, mosquitos are not just irritating—they’re deadly. Malaria, which is transmitted by mosquitos, took the lives of 438,000 people worldwide last year. More than 3 billion people remain at risk of contracting this horrific disease, which is especially dangerous for pregnant mothers and young people. As President Obama put it last September, “Many children are just one mosquito bite away from death. And that is a moral outrage.” That’s why the President’s recently-submitted budget requests an additional $200 million for the President’s Malaria Initiative—a bipartisan effort begun by President George W.

This brings the total funding the White House has requested for this initiative to $874 million next fiscal year—a 30 percent increase from this year, and more than doubling PMI’s budget at the beginning of the Administration. Fighting Malaria. What Is Malaria? Malaria No More At Malaria No More, we envision a world where no child dies from a mosquito bite. 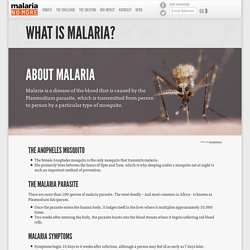 We use our innovative partnerships and focused advocacy to elevate malaria on the global health agenda, create political will and mobilize the global resources required to achieve malaria eradication within a generation. SeattleWashington Photo by David Maitland The Anopheles Mosquito. Malaria. Between 2000 and 2015, malaria mortality rate has fallen by 60% and the number of malaria cases has fallen by 37% globally. 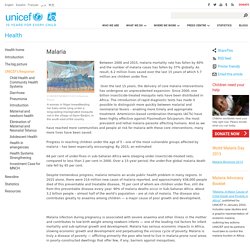 As result, 6.2 million lives saved over the last 15 years of which 5.7 million are children under five. Over the last 15 years, the delivery of core malaria interventions has undergone an unprecedented expansion. Since 2000, one billion insecticide-treated mosquito nets have been distributed in Africa. The introduction of rapid diagnostic tests has made it possible to distinguish more quickly between malarial and nonmalarial fevers – enabling more timely and appropriate treatment. Artemisinin-based combination therapies (ACTs) have been highly effective against Plasmodium falciparum, the most prevalent and lethal malaria parasite affecting humans. Progress in reaching children under the age of 5 – one of the most vulnerable groups affected by malaria – has been especially encouraging. ACTs are the recommended treatment for uncomplicated P. falciparum malaria. 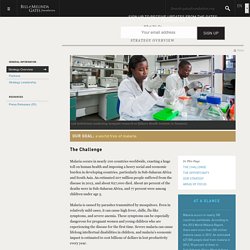 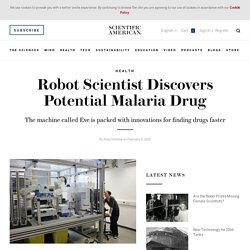 Eve’s developers believe their artificial intelligence (AI) technology could speed up drug discovery, as critics call for a “match” with a live chemist. The AI-endowed robot is designed to add a new, advanced ability to learn on top of the computational smarts that the pharmaceutical industry already uses. In research published February 4 in Journal of the Royal Society Interface computer scientist Ross King from the University of Manchester in England and his team say Eve found a chemical called TNP-470 effectively targets an enzyme that is key to the growth of Plasmodium vivax, one of the parasites that causes malaria. “I didn’t expect to actually find any useful compounds, I thought we’d just demonstrate the AI,” King says.

Eve not only has brains—it also has drug discovery brawn. Duke researchers devise computerized method for rapid, accurate diagnosis of malaria. Duke researchers have devised a computerized method to autonomously and quickly diagnose malaria with clinically relevant accuracy -- a crucial step to successfully treating the disease and halting its spread. 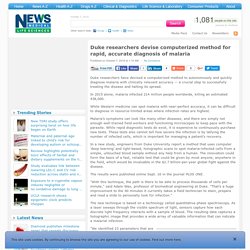 In 2015 alone, malaria infected 214 million people worldwide, killing an estimated 438,000. While Western medicine can spot malaria with near-perfect accuracy, it can be difficult to diagnose in resource-limited areas where infection rates are highest. Malaria's symptoms can look like many other diseases, and there are simply not enough well-trained field workers and functioning microscopes to keep pace with the parasite. While rapid diagnostic tests do exist, it is expensive to continuously purchase new tests. These tests also cannot tell how severe the infection is by tallying the number of infected cells, which is important for managing a patient's recovery. 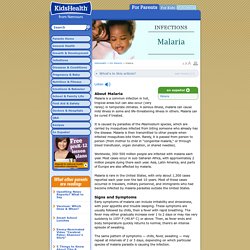 Malaria: Causes, Symptoms and Treatments. Malaria is a life-threatening blood disease caused by parasites transmitted to humans through the bite of the Anopheles mosquito. 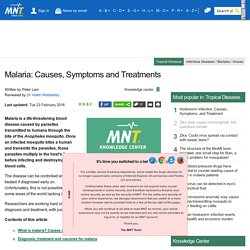 Once an infected mosquito bites a human and transmits the parasites, those parasites multiply in the host's liver before infecting and destroying red blood cells. The disease can be controlled and treated if diagnosed early on. Unfortunately, this is not possible in some areas of the world lacking in medical facilities, where malaria outbreaks can occur. Researchers are working hard on improving the prevention of malarial infection, early diagnosis and treatment, with just one malaria vaccine close to being licensed so far. You will also see introductions at the end of some sections to any recent developments that have been covered by MNT's news stories. 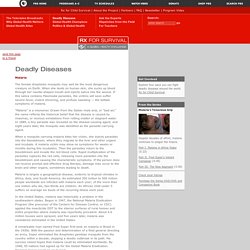 When she lands on human skin, she sucks up blood through her needle-shaped mouth and injects saliva into the wound. If this saliva contains Plasmodia parasites, the victims will soon suffer severe fever, violent shivering, and profuse sweating — the telltale symptoms of malaria. "Malaria" is a misnomer. Drawn from the Italian mala aria, or "bad air," the name reflects the historical belief that the disease is caused by miasmas, or noxious exhalations from rotting matter or stagnant water.

In 1889, a tiny parasite was revealed as the disease-causing agent, and eight years later, the mosquito was identified as the parasite-carrying agent. When a mosquito carrying malaria bites her victim, she injects parasites into the bloodstream, where they migrate to the liver and other organs and incubate. Malaria is largely a geographical disease, endemic to tropical climates in Africa, Asia, and South America.