New Page 1. New Page 1. John Snow and the cholera epidemic in London - Health Report. Norman Swan: And that's a perfect lead to our next story here on RN's Health Report because the way of carrying out such a study dates back to the mid 19th century and a cholera epidemic in London, and an amazing general practitioner called John Snow whose 200th birthday is on the 15th March. 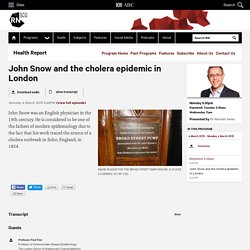 The London School of Hygiene and Tropical Medicine is the focus for celebrations of Snow's life and work, led by Paul Fine who's Professor of Communicable Disease Epidemiology at the school. Paul Fine: John Snow was born in New York, he came from a family of very modest means. His father was a carter.

He was a smart young man, and ultimately he turned towards medicine, an apprentice with a physician in Newcastle for a number of years. And then he moved to London to complete his medical training and ultimately set up practice as a GP in Soho. Norman Swan: So very near where we are sitting now. Doctor Snow’s Health Map Propaganda. Doctor John Snow’s cholera map of 1854 is often heralded as an example of how mapping can illuminate powerful insights on otherwise hidden patterns.

Not so, writes Mark Monmonier in his excellent book on “Spying with Maps” which I just reviewed here. Mark writes the following on John Snow’s famous map: “If disease mapping has a poster child, it’s John Snow (1813-1858), the London anesthesiologist credited with discovering the water borne transmission of cholera. […] Snow is best known for his 1854 map showing victims’ homes clustered around Soho’s infamous Broad Street Pump, which he identified as a source of contaminated water. According to epidemiological lore, the good doctor tried unsuccessfully to convince public officials to close down the pump.”

“Undaunted, he too matters in his own hands, removed the pump’s handle, and demonstrated the correctness of his theory when new cases plummeted. CSISS Classics - John Snow: The London Cholera Epidemic of 1854. It wasn't until 1854, when Cholera struck England once again, that Snow was able to legitimate his argument that Cholera was spread through contaminated food or water. 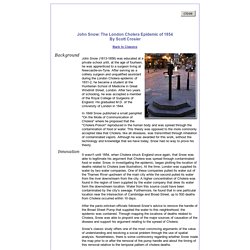 Snow, in investigating the epidemic, began plotting the location of deaths related to Cholera (see illustration). At the time, London was supplied its water by two water companies. One of these companies pulled its water out of the Thames River upstream of the main city while the second pulled its water from the river downstream from the city.

High resolution maps of John Snow. Teachers and scholars may want to print the maps that John Snow use in describing the Broad Street pump cholera outbreak of 1854 (map 1) and the Grand Experiment of 1854 (map 2). 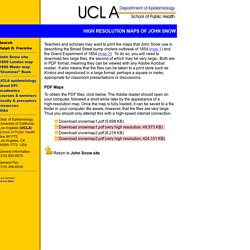 To do so, you will need to download two large files, the second of which may be very large. Both are in PDF format, meaning they can be viewed with any Adobe Acrobat reader. It also means that the files can be taken to a print store such as Kinkos and reproduced in a large format, perhaps a square or meter, appropriate for classroom presentations or discussions.

PDF Maps To obtain the PDF files, click below. New Page 1. Visualisation and the Service Sector: Why Visual Communication Design is Central to Designing the Immaterial. UX Deliverables Starter Kit. COVERSATION PIECES - nicolettebodewes.com. TOOLS FOR THERAPY - nicolettebodewes.com. Tools for Therapy encourage people to open up about their emotions. Design Academy Eindhoven graduate Nicolette Bodewes has created a tactile toolkit designed to be used in psychotherapy sessions. 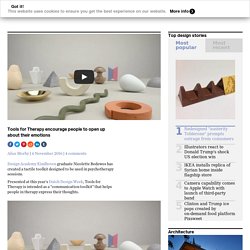 Presented at this year's Dutch Design Week, Tools for Therapy is intended as a "communication toolkit" that helps people in therapy express their thoughts. Bodewes designed the kit – which features two sets of objects, round sheets of paper and a workbook – after her own experiences with therapy sessions. "I went into therapy myself – I had a burnout when I was 28, so I was quite young," she told Dezeen. "I came into the situation where I had different kinds of therapies at the same time.

" "After years and years of just having normal talk therapy, I started to have psychomotor therapy and creative therapy, which were about all about visualising. " Bodewes found these types of therapy much more helpful, and through her work hoped to create something that could be introduced into standard psychotherapy sessions. Each object is made from a different material. Thesis Design Process. UPMC orthopedic pathway redesign – Carrie Chan. Teaching Philosophy. Teaching Philosophy with Argumentation Maps by Robert E. 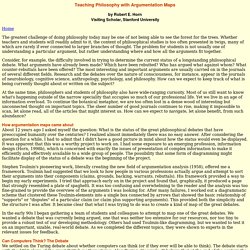 Horn Visiting Scholar, Stanford University Home The greatest challenge of doing philosophy today may be one of not being able to see the forest for the trees. Whether teachers and students will readily admit to it, the content of philosophical studies is too often presented in twigs, many of which are rarely if ever connected to larger branches of thought. Consider, for example, the difficulty involved in trying to determine the current status of a longstanding philosophical debate.

At the same time, philosophers and students of philosophy also have wide-ranging curiosity. How argumentation maps came about About 12 years ago I asked myself the question: What is the status of the great philosophical debates that have preoccupied humanity over the centuries? Stephen Toulmin's pioneering work, literally creating the new field of argumentation analysis (1958), offered me a framework.