Smart Cities. Books. Transition Design. Board Games. Thamesmead - Hidden London. Once dubbed the ‘town of the twenty-​​first century’ Thamesmead is a vast housing estate, with some peripheral industry, situated on former marshland between Woolwich and Erith The River Thames here makes its most northerly excursion within Greater London, so Thamesmead is on the same latitude as Westminster. 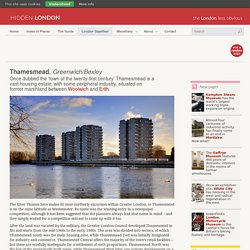 Its name was the winning entry in a newspaper competition, although it has been suggested that the planners always had that name in mind – and they simply waited for a competition entrant to come up with it too. After the land was vacated by the military, the Greater London Council developed Thamesmead in fits and starts from the mid-​​1960s to the early 1980s. The area was divided into sectors, of which Thamesmead South was the main housing zone, while Thamesmead East was initially designated for industry and commerce.

Thamesmead Central offers the majority of the town’s retail facilities – but these are woefully inadequate for a settlement of such proportions. Map Data Map Satellite.

0. Five Time-Saving Strategies for the Flipped Classroom. A few months ago, I heard a podcast by Michael Hyatt, a best-selling author and speaker who helps clients excel in their personal and professional lives. 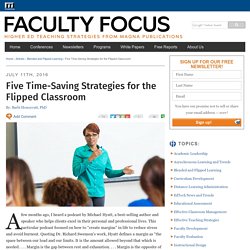 This particular podcast focused on how to “create margins” in life to reduce stress and avoid burnout. Quoting Dr. Richard Swenson’s work, Hyatt defines a margin as “the space between our load and our limits. It is the amount allowed beyond that which is needed. . . . Margin is the gap between rest and exhaustion. . . . As I listened to this podcast, I realized that the idea of creating margins also applies to the flipped classroom.

If these comments sound familiar, it might be helpful to create margins in your flipped classroom. Recommendation #1: Find flippable moments.Faculty interested in the flipped classroom get really excited about the flipped classroom. Recommendation #2: Make small changes.Once you identify the flippable moments in a course, focus on a specific lesson. Easy Reading Is Damn Hard Writing — The Startup. “As for how to write well,” writes Paul Graham, “here’s the short version: Write a bad version 1 as fast as you can; rewrite it over and over; cut everything unnecessary.” 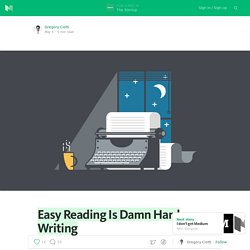 It’s all too easy to follow his first piece of advice and then neglect to follow the rest. The root of the problem lies in our desire to impress. Thesaurus carpet-bombings and long-winded sentences are commonly mistaken for fine writing because they feel authoritative and intellectual. But they’re just masks; effective writing is lean, clean, and easy to read. 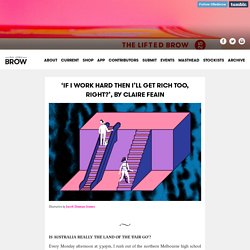 , by Claire Feain Illustration by Jacob Zinman-Jeanes Every Monday afternoon at 3:30pm, I rush out of the northern Melbourne high school where I work as a teacher and drive to a public library. It is here that I volunteer at the Brotherhood of St. Lawrence’s ‘homework club’. These kids at homework club are success stories of our education system. One Monday afternoon not long ago, three kids from Afghanistan who had recently settled in Melbourne turned up to homework club. 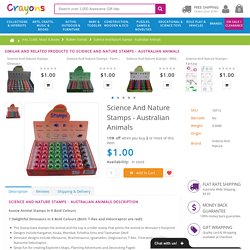 The Stamp base stamps the animal and the top is a roller stamp that prints the animal or dinosaur's footprint! Designs include Kangaroo, Koala, Wombat, Echidna, Emu and Tasmanian Devil. Dinosaur designs include Allosaurus, Brachiosaurus, Iguanadon, Stegosaurus, T-Rex, Triceratops and the fearsome Velociraptor.Great fun for creating Explorer's Maps, Planning Adventures and Decorating Pages! Echidnas on the Loose. Staying one step ahead at Pixar: An interview with Ed Catmull.

The cofounder of the company that created the world’s first computer-animated feature film lays out a management philosophy for keeping Pixar innovative. 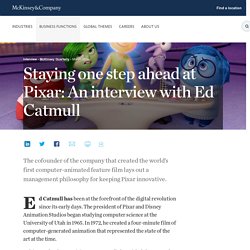 Ed Catmull has been at the forefront of the digital revolution since its early days. The president of Pixar and Disney Animation Studios began studying computer science at the University of Utah in 1965. In 1972, he created a four-minute film of computer-generated animation that represented the state of the art at the time. In his 2014 book, Creativity, Inc., Catmull chronicled the story of Pixar—from its early days, when Steve Jobs invested $10 million to spin it off from Lucasfilm, in 1986; to its release of the groundbreaking Toy Story, in 1995; and its acquisition by the Walt Disney Company, for $7.4 billion, in 2006.

But even more, he described the thrill and the challenge of stimulating creativity while keeping up with the breakneck pace of the digital age.