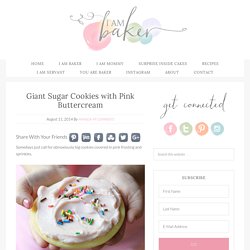 Whipped chocolate buttercream frosting - i am baker. Is there anything better than light, fluffy, rich and flavorful Chocolate Buttercream Frosting? 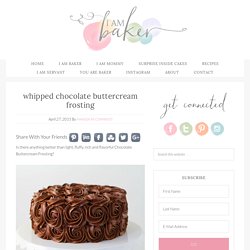 No. The answer is no. I have this recipe on my blog way over here, but it gets lost next to that beautiful marble cake deliciousness, so I decided to make sure this fantastic recipe got it’s turn in the spotlight. This whipped chocolate frosting pipes so beautifully, I just had to make my Rose Cake with it! If you want to make a rose cake, here are step-by-step instructions and here is a less than 4 minute video of me frosting a rosette cake in real time! 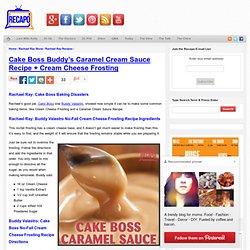 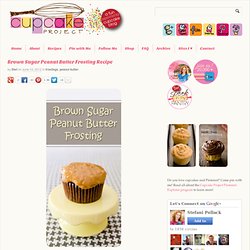 I put my brown sugar peanut butter frosting on a chocolate cupcake (I’ve been working on an ultimate chocolate cupcake recipe – more details soon), but a vanilla cupcake or banana cupcake would work just as well. Brown sugar frosting is one of my top ten favorite frostings and this variation is definitely going to go into regular rotation. OXO Good Grips Cupcake Icing Knife. 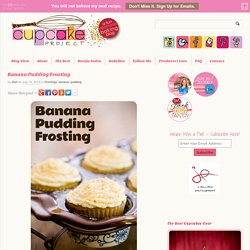 Fluffy and Irresistible Tiramisu Frosting. This tiramisu frosting could dress up even the most drab of cupcakes. 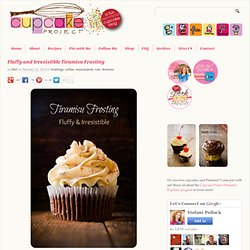 It’s a Swiss meringue buttercream frosting recipe, which means that it’s silky smooth and not overly sweet. However, this tiramisu frosting trades some of the butter for mascarpone cheese and is finished with rum, espresso, vanilla, and a dusting of cocoa powder. Thick Caramel Sauce Recipe, Apple Cider Caramel. Recipe for Caramel Whipped Cream. Brown Sugar Cookie Dough Frosting. Kiddo's birthday was last week and he LOOOOOOOOOOVES cookie dough. 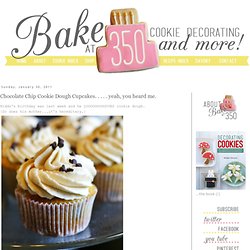 {So does his mother...it's hereditary.} I knew exactly what to make him for his birthday cake, Cheryl's Chocolate Chip Cookie Dough Cupcakes. Let me break these bad boys down for you.... First, there is a chocolate chip cookie cupcake. Then, they are filled with chocolate chip cookie dough filling. {Yeah, you don't WANT to know the WW points on these puppies.} For the cupcakes and the filling, I'm going to link you to Cheryl's printable recipe. Lemon Curd - Lemon Recipes. Return to listing Lots of lovely recipes call for lemon curd and, once again, it’s something that is never the same when shop-bought. 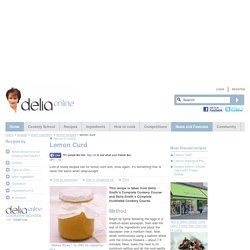 Buttermilk Caramel Glaze. This is THE best stuff. 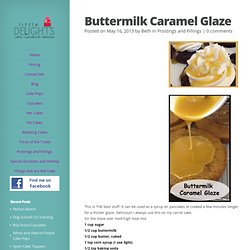 It can be used as a syrup on pancakes or cooked a few minutes longer for a thicker glaze. Delicious! I always use this on my carrot cake. On the stove over med-high heat mix1 cup sugar 1/2 cup buttermilk 1/2 cup butter, cubed 1 tsp corn syrup (I use light) 1/2 tsp baking soda While stirring constantly bring to a boil- it will foam up so be sure your pot is deep- remove from heat (or cook 1-2 minutes longer until caramel colored for thicker glaze) and add 1 tsp vanilla. Caramel Frosting V. Strawberry Buttercream Frosting. Share on Pinterest What’s the only thing you need this Valentines day? 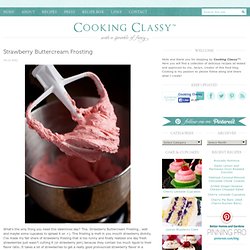 This. Strawberry Chantilly. The ultimate berries ‘n cream: strawberry reduction whipped into fresh cream. You probably don’t need me to tell you all of the ways strawberry flavored whipped cream would taste delicious, but swapping it for plain whipped cream on strawberry shortcake would make a good start. Or, my favorite, with basil pots de creme.

Pastry Cream. If you’ve ever stood in an overstuffed closet, rummaging through everything you own only to conclude “I have nothing to wear,” you have a pretty good idea of what coming up with a new dessert can feel like. The problem doesn’t have anything to do with a lack of options, but in finding a way to combine familiar pieces into something that won’t bore you to death. Knowing the season helps narrow things down, but you still have to assemble the “outfit” one element at a time. To that end, pastry cream is the chunky cable knit sweater of desserts. All by itself it’s kinda boring, but layered with other elements it becomes the foundation for countless outfits desserts. Unlike that sweater, you can “dye” pastry cream any flavor to match the season or your mood, but vanilla bean never goes out of style.

German Buttercream. Swiss meringue buttercream has become the gold standard of professional baking, but it’s not the only fabulous European style buttercream out there. Of course there are French buttercreams (made with egg yolks) and Italian buttercreams (made from pouring boiled sugar syrup over meringue) too, but lesser known is German. German buttercream is perfect for those wanting to graduate from powdered sugar based frosting, but not ready to jump on the Swiss bandwagon. When making or eating Swiss buttercream for the first time, “it tastes like pure butter” is a common complaint. Though kind of ironic (um, yes, it is called a buttercream…), it’s a valid observation. Dark Chocolate Glaze. Dark Chocolate Glaze... I posted this with the donut cookies, but really, it needs its own post. You NEED this in your life. Use it to decorate a cookie, slather it on graham crackers, dip some pretzels, eat it straight from the spoon. JUST MAKE IT.

{Don't make me beg.} The glaze dries shiny, hard (but not crunchy), and stackable. Dark Chocolate Glaze 1/2 cup dutch-process cocoa (such as Hershey's Special Dark) 1 & 3/4 cups powdered sugar 2 TBSP light corn syrup 3 TBSP (or more) milk Whisk together the cocoa and powdered sugar. You don't have to be so fussy with the thinning like royal icing. The glaze will harden and be stackable in 12-24 hours. Butterscotch Frosting Recipe. Ganache. I hadn’t intended to include a ganache recipe, ganache is more ratio than recipe: equal parts cream and chocolate, some vanilla and a pinch of salt thrown in for bonus points. Campbell's Raspberry Ganache. Coconut Whipped Cream: A Step-By-Step Photo Tutorial.

Coconut Whipped Cream. Cutting down or eliminating dairy, but still want something to top pumpkin pie, crazy pancakes or simply to dip strawberries in? Coconut milk makes just as thick and rich whipped cream as whipping cream, if not more! And the only different in preparation is to remember to put the coconut milk in the fridge long enough to chill. An additional plus is that whipped coconut cream does not break down the way dairy does. This whipped cream can be covered and stored for up to a few days without separation taking place. That alone makes it a better option in my book! Ingredients. How-to: Whipped Coconut Cream from Coconut Milk. Coconut Whipped Cream, Vegan Holiday Dessert Recipe. Easy Vegan Holiday Dessert Recipe from Dairy Free Made Easy Simple, rich and divinely delish coconut whipped cream recipe, adapted from 'Dairy Free Made Easy', by Alisa Marie Fleming, Go Dairy Free.

If you can't find it at a local store like Michaels, order some through the Internet, for example through Amazon. A Tasty Recipe: That’s the Best Frosting I’ve Ever Had. Satin Icing Recipe by Vegetarian Dishes. Strawberry White Chocolate Ganache.