How to make candy buttons. I always loved those old fashioned candy buttons—remember the ones with the brightly colored blobs stuck to strips of white paper?

I loved them even when they tore the paper and I got a mouth full of it. Back when I only had my son, and had a lot more time to be creative, I used to make iced sugar cookies. Since they took an entire day to complete, they were a pure labor of love. But it was satisfying when I flooded the royal icing just right, and ended up with a cookie with a perfectly smooth, silky surface. I don’t know why I never made the connection, but I finally discovered that the same royal icing I used to flood my cookies was the same thing they used to make candy buttons. 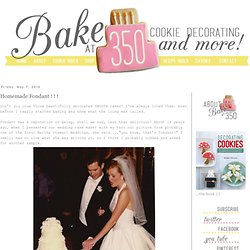 I've always loved them. Even before I really started baking and knew what the icing was called. Fondant has a reputation of being, shall we say, less than delicious? About 14 years ago, when I presented our wedding cake maker with my torn out picture from probably one of the first Martha Stewart Weddings, she said.... "you know, that's fondant? " {That's my husband, but I have no idea who that tan, thin girl is!}

I decided to bite the bullet and try making my own. 16 oz. bag mini marshmallows 3 TBSP water 2 lbs. powdered sugar Crisco Grease a large glass bowl with Crisco. Pour in the marshmallows and water in the bowl. Reserve about 1/4 c. powdered sugar. Beat until a dough forms. Grease a clean work surface with Crisco and dump out the fondant and all loose bits. Grease hands again as needed. Once smooth, you can divide and color the fondant. To use it, dust the surface and rolling pin with cornstarch and roll to 1/8th of an inch. Royal Icing 102 . . . or 201 . . . or whatever comes after 101. If you've been reading the blog for a while, you might have seen my post titled "Royal Icing 101. 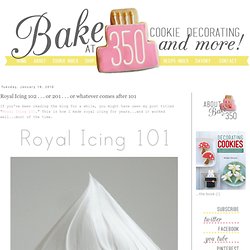 " This is how I made royal icing for years...and it worked well...most of the time. Sometimes, though, I had problems with my icing. Some days it looked dull; sometimes the piping cracked; sometimes the flood icing was filled with little holes. How to make Italian meringue buttercream. Italian Meringue Buttercream. Italian Buttercream From The Culinary Institute Of America Recipe. How To Make Decorating Fondant for Cakes. The beautiful side of baking: blissful buttercream. When it’s time for a cake to put on its party clothes, only one frosting will do: buttercream. 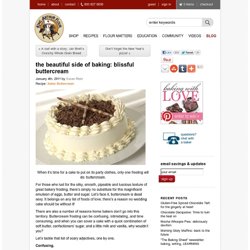 For those who lust for the silky, smooth, pipeable and luscious texture of great bakery frosting, there’s simply no substitute for this magnificent emulsion of eggs, butter and sugar. Let’s face it, buttercream is dead sexy. It belongs on any list of foods of love; there’s a reason no wedding cake should be without it! There are also a number of reasons home bakers don’t go into this territory. Rolled Buttercream Fondant Recipe. Swiss Buttercream. If you haven’t made Swiss buttercream before, you may be surprised at just how buttery it tastes. 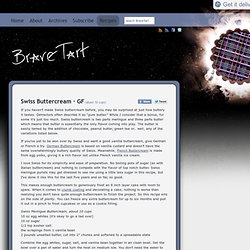 Detractors often describe it as “pure butter.” While I consider that a bonus, for some it’s just too much. Swiss buttercream is two parts meringue and three parts butter which means that butter is essentially the only flavor coming into play. The butter is easily tamed by the addition of chocolate, peanut butter, green tea or… well, any of the variations listed below. If you’ve yet to be won over by Swiss and want a good vanilla buttercream, give German or French a try. I love Swiss for its simplicity and ease of preparation. 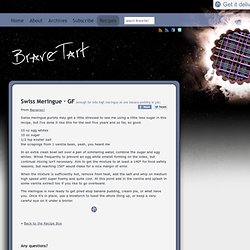 Swiss meringue purists may get a little stressed to see me using a little less sugar in this recipe, but I’ve done it like this for the last five years and so far, so good. 10 oz egg whites 10 oz sugar 1/2 tsp kosher salt the scrapings from 1 vanilla bean, yeah, you heard me In an extra clean bowl set over a pan of simmering water, combine the sugar and egg whites. Whisk frequently to prevent an egg white omelet forming on the sides, but continual mixing isn’t necessary. Aim to get the mixture to at least a 140° for food safety reasons, but reaching 150° would make for a nice margin of error.

When the mixture is sufficiently hot, remove from heat, add the salt and whip on medium high speed until super foamy and quite cool. The meringue is now ready to get piled atop banana pudding, cream pie, or what have you. . « Back to the Recipe Box Feb 13, 2012 · 5:02 PM would love to know more about your experience at CIA. . · martha bakes · Feb 13, 2012 · 7:31 PM. Sweetsugarbelle's Royal Icing Recipe. How to make marshmallow fondant. Food.