Pandeism: An Anthology by Knujon Mapson. About this project Risks and challenges Once this project is funded, we face the risks inherent to an anthology of contributions from different writers -- it is possible that circumstances may prevent one or more of our writers from coming through with their promised pieces. 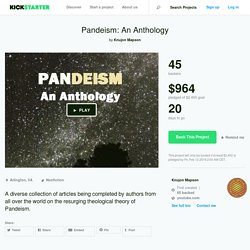 If this happens, the book will go forward, but with less original content than planned. Conversely, our authors may end up being more loquacious than expected, or other authors may volunteer articles, and we may end up with a larger book than expected, leading to increased editing costs, which we will have to find a way to cover. A few addenda worth of note: firstly, this book has already been accepted for publication by a reputable publisher (John Hunt Publishing, to be released on its Iff Books imprint), but an author subsidy of $2,011 was requested; and was advanced by our literary agent, to whom it is now due and owing, in addition to other fees for services.

Learn about accountability on Kickstarter Ask a question. Pandeism and Science. Welcome to an essential node of the Pandeism index !! 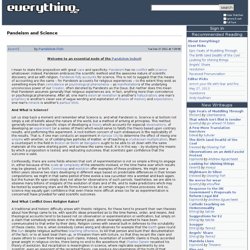 I mean to state this proposition with great care and specificity: Pandeism has no conflict with science whatsoever; indeed, Pandeism embraces the scientific method and the awesome nature of scientific discovery, and as with religion, Pandeism fully accounts for science. This is not to suggest that the means of accounting are the same -- for Pandeism accounts for religious experiences -- to the extent they exist as something more than coincidence or psychological phenomena -- as manifestation s of the underlying unconscious power of our Creator , often denoted by Pandeists as the Deus. But neither does this mean that Pandeism assumes generally that religious experiences are, in fact, anything more than coincidence or psychological phenomena.

And What Is Science? The God Theorem. "The PanDeist Theorem" by Robert G.Brown. The Pandeist Theorem. Next: Proof One Up: god_theorem Previous: Axioms and Definitions Contents Let us now (at last) state the basic theorem: If God exists, then God is identical to the Universe. 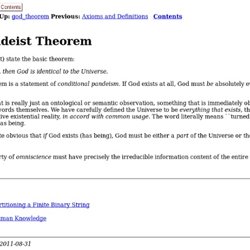 That is, the theorem is a statement of conditional pandeism . If God exists at all, God must be absolutely everything that exists. The Randomness of Pi: The Frequency of Digits and Patterns Appearing in the Number π (Pi) A Statistical Approach Searching for Meaningful Patterns within π (Pi) Graphs of the Frequency of the Digits Found in 250, 500, 750 and 1000 Decimal Places of π (Pi) 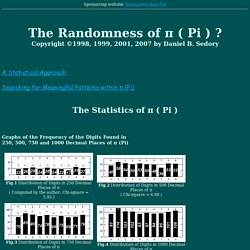 Universal common ancestor. Why Evolution Is True. Pandeism. Welcome to the ultimate node of the Pandeism index !! 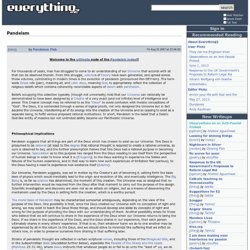 For thousands of years, man has struggled to come to an understanding of our Universe that accords with all that can be observed therein. From this struggle, volume s of theory have been generated, and spread across those volumes, culminating in modern times is the evolution of pandeism (pronounced Pan-DEY-ism). Pandeism Wiki. Encyclopedia Britannica. Pandeism on netHelper. A pantheistic form of deism The deist movement adopted that name to refer to a God not knowable by revelation, but who could only be found by rational thought. 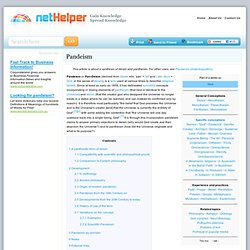 Perhaps the first use of the term deist is in Pierre Viret's Instruction Chrestienne (1564), reprinted in Bayle's Dictionnaire entry Viret. Viret, a Calvinist, regarded deism as a new form of Italian heresy.[4] Viret wrote: Compatibility with scientific and philosophical proofs Arguments for the existence of God (other than those premised on the truth of a particular religious text) tend to support a pandeistic Universe as readily, if not more, as a theistic Universe.

Comparison to Eastern philosophy. Pandeism on Wikipedia. Pandeism (or pan-deism) is a theological doctrine which combines aspects of pantheism and deism.[1] It holds that the creator of the universe actually became the universe, and so ceased to exist as a separate and conscious entity.[2][3][4][5] Pandeism is proposed to explain, as it relates to deism, why God would create a universe and then abandon it,[6] and as to pantheism, the origin and purpose of the universe.[6][7] A pantheistic form of deism[edit] Pandeism falls within the traditional hierarchy of nontheistic philosophies addressing the nature of God.[9] For the history of the root words, pantheism and deism, see the overview of deism section, and history of pantheism section. 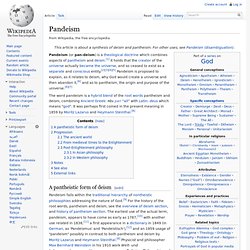 Progression[edit] Pandeism on Wikistalker. Wikistalker illustrates the relations between different things by visualizing the semantic relevance between the inter-connected structure of their Wikipedia entry articles. 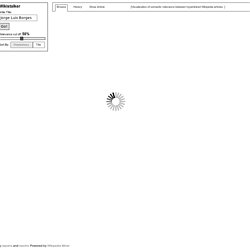 In this visualization, each bar (or ray) represents an outgoing link from the Wikipedia article with its length corresponding to the semantic relevance of two connected articles. You can filter links by their relatedness using the sliding bar and sort them alphabetically or by relevance. Pandeism Fish (Pandeism) @Pandeism’s Best Tweets. The God Franchise. Pandeism. Word Of The Day: Pandeism. [noun] also known as pan-Deism (from Ancient Greek: πάν pan “all” and Latin: deus meaning “God” in the sense of deism) – a term describing beliefs incorporating or mixing logically reconcilable elements of pantheism (that “God”, or its metaphysical equivalent, is identical to the universe) anddeism (that the creator-god who designed the universe no longer exists in a status where it can be reached, and can instead be confirmed only by reason). 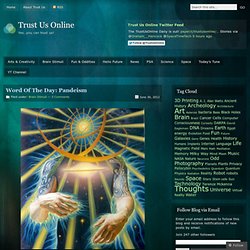 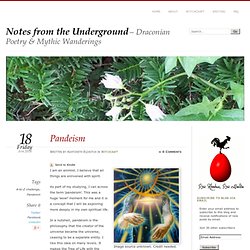 Credit needed. I am an animist. I believe that all things are enlivened with spirit. As part of my studying, I can across the term ‘pandeism’. This was a huge ‘wow!’ Pandeism index. This is an index of nodes relating to the theological theory of Pandeism , that being that ours is a Created Universe, and that our Creator in fact became our Universe so as to share in the experience of the life coming to exist within it through natural process occurring as a result of the governing dynamics set forth in its creation. You may treat them as if they were chapters in a book to be read in no particular order: The Essentials: Pandeism. "The fact that we exist is proof that God is motivated to act in some way.

And since only the challenge of self-destruction could interest an omnipotent God, it stands to reason that we . . . are God’s debris . " — Scott Adams , God's Debris Pandeism is a theological theory which proposes that a god created the Universe by becoming the Universe. This god currently exists as an unconscious force sustaining the Universe. Various explanations have been introduced as to why this happened, mostly revolving around the creator needing to learn something through the human experience, or perhaps wishing to experience nonexistence itself. DeviantART. Quotes About Pandeism (5 quotes) Urban pandeism. Pandeism. Institute for Pandeism Studies. Philosophical implications Pandeism suggests that all things are part of the Deus which has chosen to exist as our Universe. This Deus is presumed to be rational (at least to the degree that rational thought is required to create a rational universe, as ours is observed to be), and the further presumption follows that this Deus had a rational purpose in becoming our Universe.

Speculation as to this purpose has ranged from the Deus needing to see itself from the perspective of human beings in order to know what it is (Eriugena); to the Deus wanting to experience the foibles and failures of the human experience, and in that way to learn how such experiences of limitation feel (various); to the Deus having a need to experience non-existence itself (Adams). Our Universe, Pandeism suggests, was set in motion by the Creator's act of becoming it, setting forth the basic laws of physics which would inevitably lead to the origin and evolution of life, and eventually intelligence.

II. IV. Pandeism and fictional worlds. Pandeism and the world of Star Wars The Star Wars Universe is characterized by the central role of the Jedi, an essentially religious order which corresponds to a metaphysical characteristic of that world -- The Force. And what is The Force? Obi-Wan Kenobi tells Luke Skywalker of it being "an energy field created by all living things. It surrounds us and penetrates us; it binds the galaxy together. " But in practice it appears that The Force is not restricted to living things even, at least insofar as Force-user seem undiminished in their application of its power in deep space and on planets lifeless but for their own presence (such as the volcanic world of Mustafar where a younger Obi-Wan and Anakin Skywalker duel amidst torrents of lava).

However this doesn’t prevent us from speculating what form the religion(s) of the future will take. Most prospective Space settlers or Spacers, will likely be quite scientifically mended and will therefore accept scientific facts like the big bang and evolution. However many people, even if they fully accept modern cosmology and biology, will still feel uncomfortable without some sense of divinity. Many people make great difficulties with combining their acceptance of modern science with some kind of religion. One of these attempts has been made by Bernard Haisch in his book The God Theory.

Deism & Pandeism. Deism is the belief that a supreme power created the universe and that this, and other truths, can be determined using reason and by observing the natural world. For deists there is no need for faith, nor organized religion in order to come to these conclusions. Pantheism, Naturalistic Pantheism & Pandeism. Pandeism. The Invisible College. Explain Pandeism for me. I agree with fireball, now is the time to reach out to Jesus, his hands are waiting to be pulled on. Pandeism and sexual pleasure. RocketteRose's Homepage on MyFreeCams.com. Interests & Hobbies.

MissAlice_18. Pandeism. What is the Nature of Reality? Image Source Haunting Spheres Within Spheres by Bill M. Tracer In this essay, we’ll examine a few of the possible answers in broad categories, and evaluate their merit. Secular Materialism (There is only the material universe with no real spiritual aspect. In this view God is not necessary.) Pandeism. An Explanation of My New-Found Panendeism - The American Deist. The Duality of Perspective. The Syntheist Movement. Pantheism Unites. The Question of Pandeism. Pandeism revisted. The parallels of Pandeism. Bernardo Kastrup. Pandeism with Rusty Nails. PanDeism. Religious views.

Faces of the Supreme Being: Pandeism. Pandeism.