History of Shoes - 19th and 20th Century Women's Footwear. For most of the 19th century, shoes came in black, brown, white, and tan. 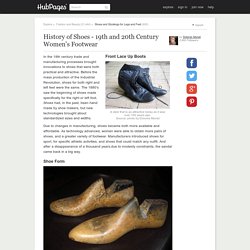 But in the 1920's, what with shorter skirts and highly visible shoes, evening footwear was produced in colors, though the old colors were a mainstay for day wear. As hemlines rose during and after World War I, the gap between the boot top and skirt appeared unsightly, and women began to wear Mary Janes with low, curved heels. Bathing shoes began to bare more of the instep and in the late 1920's low heeled sandals were worn with beach pajamas. Despite the Great Depression, a shoe fashion explosion took place in the 1930's, with spectator pumps, oxfords, and brogues. Sandals, worn in ancient times, had slipped out of fashion for over a thousand years because they were thought to be immodest. 1870-1914 Manufacture and Materials. It is during this period in which the fashion influence of the world began to shift from Europe. 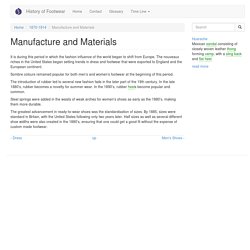 The nouveaux riches in the United States began setting trends in dress and footwear that were exported to England and the European continent. Sombre colours remained popular for both men’s and women’s footwear at the beginning of this period. 1815-1870 Women's Shoes. It is during this period that women’s shoe styles finally came to vary more than the men’s. 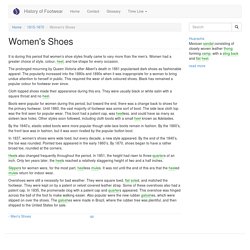 Women had a greater choice of style, colour, heel, and toe shape for every occasion. The prolonged mourning by Queen Victoria after Albert’s death in 1861 popularised dark shoes as fashionable apparel. The popularity increased into the 1880s and 1890s when it was inappropriate for a woman to bring undue attention to herself in public. 1815-1870 Manufacture and Materials. The footwear of this period varied more than can be seen in any preceding years. 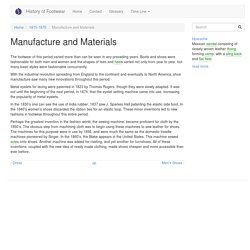 Boots and shoes were fashionable for both men and women and the shapes of toes and heels varied not only from year to year, but many basic styles were fashionable concurrently. With the industrial revolution spreading from England to the continent and eventually to North America, shoe manufacture saw many new innovations throughout this period. Metal eyelets for lacing were patented in 1823 by Thomas Rogers, though they were slowly adapted. It was not until the beginning of the next period, in 1874, that the eyelet setting machine came into use, increasing the popularity of metal eyelets.

In the 1830’s one can see the use of india rubber. 1837 saw J. History of Women's Shoes. In cultures where bare feet are customary or only simple sandals are worn, little interest exists in the female foot as a sensual appendage. 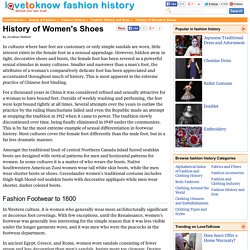 However, hidden away in tight, decorative shoes and boots, the female foot has been revered as a powerful sexual stimulus in many cultures. Smaller and narrower than a man's foot, the attributes of a woman's comparatively delicate foot has been appreciated and accentuated throughout much of history. This is most apparent in the extreme practice of Chinese foot binding.

For a thousand years in China it was considered refined and sexually attractive for a woman to have bound feet. Outside of weekly washing and perfuming, the feet were kept bound tightly at all times. Amongst the traditional Inuit of central Northern Canada inlaid furred sealskin boots are designed with vertical patterns for men and horizontal patterns for women. Fashion Footwear to 1600 Christianity reinforced the alliance of what was once Rome's domain. History and Women: Chopines - Platform Heels Renaissance Style. Chopines were platform shoes worn by women in the 15th, 16th and 17th centuries. 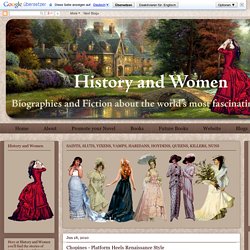 They protected the shoes and dress from mud and street soil. Chopines were usually put on with the help of two servants. They caused an unstable and inelegant gait. Women who wore them usually were accompanied by a servant or attendant upon whom they could balance themselves. Analysis of royal sandals in ancient Egypt, Part 1. (Sincerest thanks to Tom Hardwick for his astute comments and suggestions during the crafting of this two-part article) You can tell a lot by the shoes someone wears. 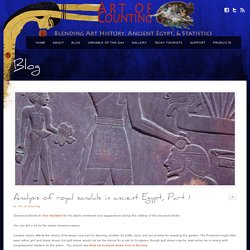 Context clearly affects the choice of footwear; one pair for dancing, another for traffic court, and yet another for weeding the garden. The President might often wear either golf and dress shoes, but golf shoes would not be the choice for a visit to Congress, though golf shoes may be seen when he is simply with congressional leaders on the green.

You should see what my husband wears most of the time. As in 21st Century America, so in ancient Egypt: the context appears to have also influenced whether or not pharaoh was depicted wearing sandals, but the subtleties of their usage patterns have not been statistically analyzed. World's Oldest Leather Shoe Found—Stunningly Preserved. A Manolo Blahnik it isn't. 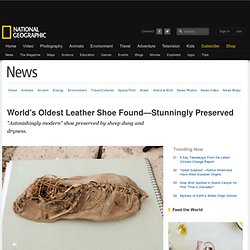 Still, the world's oldest known leather shoe, revealed Wednesday, struck one of the world's best known shoe designers as shockingly au courant. "It is astonishing," Blahnik said via email, "how much this shoe resembles a modern shoe! " Stuffed with grass, perhaps as an insulator or an early shoe tree, the 5,500-year-old moccasin-like shoe was found exceptionally well preserved—thanks to a surfeit of sheep dung—during a recent dig in an Armenian cave. About as big as a current women's size seven (U.S.), the shoe was likely tailor-made for the right foot of its owner, who could have been a man or a woman—not enough is known about Armenian feet of the era to say for sure. Made from a single piece of cowhide—a technique that draws premium prices for modern shoes under the designation "whole cut"—the shoe is laced along seams at the front and back, with a leather cord. The end result looks surprisingly familiar for something so ancient—and not just to Blahnik.

Oetzi the Iceman, tzi the Iceman: His Clothing. History of Footwear. Adelaide Boot search for term A side-laced cloth ankle boot with a small heel, named after the Queen Consort of William IV. 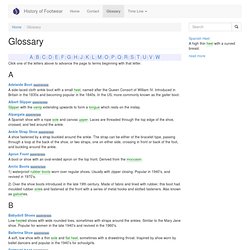 Introduced in Britain in the 1830s and becoming popular in the 1840s. In the US, more commonly known as the gaiter boot. Albert Slipper search for term Slipper with the vamp extending upwards to form a tongue which rests on the instep. Alpargata search for term A Spanish shoe with a rope sole and canvas upper. Ankle Strap Shoe search for term A shoe fastened by a strap buckled around the ankle. Apron Front search for term A boot or shoe with an oval-ended apron on the top front. Human Past Index.

In General The multiple ways in which Homo spaiens diverged physically and behaviorally from pre-sapiens forms of Homo in the period between about 300,000 years ago to 30,000 years ago are collectively referred to as the "Middle/Upper Paleolithic transition. 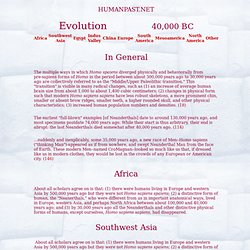 " This "transition" is visible in many radical changes, such as (1) an increase of average human brain size from about 1,000 to about 1,400 cubic centimeters; (2) changes in physical form such that modern Homo sapiens sapiens have less robust skeletons, a more prominent chin, smaller or absent brow ridges, smaller teeth, a higher rounded skull, and other physical characteristics; (3) increased human population numbers and densities. (18) The earliest "full-blown" examples [of Neanderthals] date to around 130,000 years ago, and most specimens postdate 74,000 years ago.

While their start is thus arbitrary, their end is abrupt: the last Neanderthals died somewhat after 40,000 years ago. (114) Africa Southwest Asia Egypt Indus Valley China. Encyclopedia Britannica. The History and Origin of Shoes & Footwear. The history of shoes--that is to say, archaeological and paleoanthropological evidence for the earliest use of protective coverings for the human foot--appears to start during the Middle Paleolithic period of approximately 40,000 years ago.

The Oldest Shoes The oldest shoes recovered to date are sandals found at several Archaic (~6500-9000 years bp) and a few Paleoindian (~9000-12,000 years bp) sites in the American southwest. Dozens of Archaic period sandals were recovered by Luther Cressman at the Fort Rock site in Oregon, direct-dated ~7500 BP. Fort Rock-style sandals have also been found at sites dated 10,500-9200 cal BP at Cougar Mountain and Catlow Caves.

Humans Wore Shoes 40,000 Years Ago, Fossils Indicate. July 1, 2008 Humans were wearing shoes at least 10,000 years earlier than previously thought, according to a new study. The evidence comes from a 40,000-year-old human fossil with delicate toe bones indicative of habitual shoe-wearing, experts say. A previous study of anatomical changes in toe bone structure had dated the use of shoes to about 30,000 years ago. Now the dainty-toed fossil from China suggests that at least some humans were sporting protective footwear 10,000 years further back, during a time when both modern humans and Neandertals occupied portions of Europe and Asia.

(Related: Atlas of the Human Journey) Study author Erik Trinkaus, a paleoanthropologist at Washington University in St. However, he noted, even Neandertals may have been strapping on sandals. First Shoes Worn 40,000 Years Ago. Humans started wearing shoes about 40,000 years ago, much earlier than previously thought, new anthropological research suggests. As any good clothes horse knows, the right outfit speaks volumes about the person wearing it. Now, anthropologists are tapping into that knowledge base, looking for the physical changes caused by wearing shoes to figure out when footwear first became fashionable. Turns out, clothes really do make the man (and the woman), at least when it comes to feet. That's because wearing shoes changes the way humans walk and how their bodies distribute weight. *history of footwear - fact and ficton (January 2012) - Research of Steven Robbins, MD, barefoot, sedentary lifestyle, sedentary, shoes, minimalist shoes, barefoot shoes, injuries, injury prevention.

For perhaps 4000 years prior to the Renaissance, elite groups in some civilizations occasionally wore decorative footwear as a sign of advanced status. These shoes were invariably poorly functional in terms of locomotion. As an example, Pharaonic Egypt was one the earliest societies to use footwear. The Fascinating History Of Footwear. Northampton Borough Council. History of Footwear. Timeline Infographic A History of Shoes. Timeline Infographic A History of Shoes Minimalist Running Shoes Bring Us Back to Our Barefoot Roots.

History of Shoes. Interesting Information and Facts about Shoes. Types of Shoes - Different Types of Footwear. Men's Shoes Oxfords (Balmorals) – The main feature of this shoes I V-shaped slit in vamp where laces are attached. Blüchers (Derbys) – Similar looking as Oxford’s, but laces are attached to two pieces of leather that are glued or stitched to vamp. Monk-straps – Shoes that don’t have laces, but instead uses buckle and strap to secure the shoe around the foot. Brogues – They feature decorative perforations and separations along the visible edges of material. Buskin Shoes History and Facts. As the technology for creating more elaborate footwear became more common among ancient European civilization, one particular type of boot managed to infuse itself into the daily lives of many people in 1st millennia BC.

High-Heeled Shoe History - Historical High-Heeled Footwear. High-heeled shoes managed to forge for themselves a very important place in the history of modern fashion. History of High-Heeled Footwear - Origins. Throughout history of clothes making, many civilizationstried to control the development of clothes trough social norms, laws and fashion. As an integral part of modern human attire, shoes went through turbulent periods of time where their usage was sometimes strictly controlled by law or religion, and sometimes free to advance unhindered by any obstacles. History of Footwear. Shoes are the protective items that enables us to protect ourselves during various activities, comfort us in various outdoor environments, provide us with another way to express ourselves with their designs and uses that changed from ages to ages and from civilization to civilization. Shoes Timeline - From Historical Footwear to Modern Shoes. 40000 BC – First archeological evidence of protective foot covering found in Ice Age settlements. 4000 BC –First recorded mentioning of shoes as “flexible pieces of leather” came from Ancient Egypt. 3627 BC – Archeologist found the earliest known leather shoe near one of the cave dwellings in Armenia. 3rd to 1st millennia BC – Many civilizations around the world used simple leather sandals in their daily life.