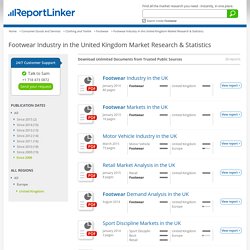 Magazine Startup Checklist. You can greatly improve the chances your new magazine will succeed by creating a go/no-go list before you launch. 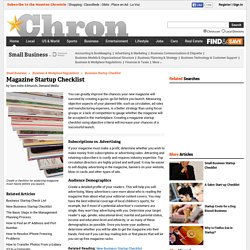 Measuring objective aspects of your planned title, such as circulation, ad rates and manufacturing expenses, is a better strategy than using focus groups or a lack of competition to gauge whether the magazine will be accepted in the marketplace. Creating a magazine startup checklist using objective criteria will increase your chances of a successful launch. Subscriptions vs. Advertising If your magazine must make a profit, determine whether you wish to make money from subscriptions or advertising sales. Audience Demographics.

Brand bible by Dan Proudfoot. Short brand guidelines design aw by Will Jeffrey. Venture-pl2.jpg (JPEG Image, 1224 × 1584 pixels) - Scaled (63%) Profit and loss accounts, balance sheets Accounts business studies and business english. Two of the most important financial statements for a business are the Profit and Loss Account, and the Balance Sheet. 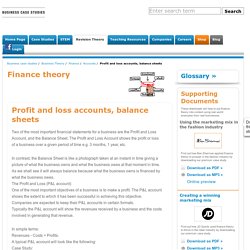 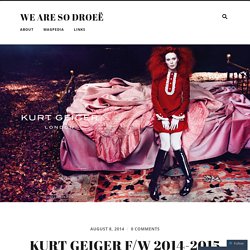 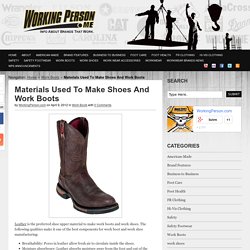 The following qualities make it one of the best components for work boot and work shoe manufacturing: Breathability: Pores in leather allow fresh air to circulate inside the shoes.Moisture absorbency: Leather absorbs moisture away from the foot and out of the shoe.Customization: Leather will assume the shape of the wearer’s feet, providing individualized fit. This quality maximizes comfort and minimizes foot disorders.Durability: Leather resists tearing and puncturing. The most commonly used leathers to make footwear are: Kurt Geiger &ndash; a shining example of a sole trader - Business Analysis & Features - Business - The Independent. Five hundred million pairs are sold in the UK each year. 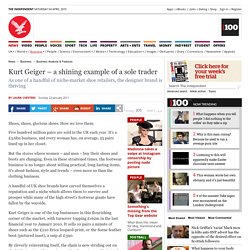 It's a £5.6bn business, and every woman has, on average, 25 pairs lined up in her closet. But the stores where women – and men – buy their shoes and boots are changing. Even in these straitened times, the footwear business is no longer about selling practical, long-lasting items, it's about fashion, style and trends – even more so than the clothing business.

A handful of UK shoe brands have carved themselves a reputation and a niche which allows them to survive and prosper while many of the high street's footwear giants have fallen by the wayside. Kurt Geiger is one of the top businesses in this flourishing corner of the market, with turnover topping £162m in the last financial year to January 2010. Top 5 unusual London shoe shops from Irregular Choice to Kate Kanzier. The saying goes that clothes maketh the man, but anyone with an eye for style will know that shoes also play a pretty important role. 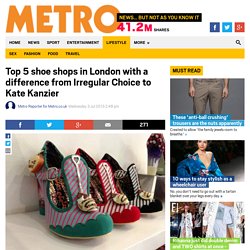 Whether you’re suited and booted, running in heels or not adverse to a pair of blue suede shoes, your footwear says a lot about you. That’s why this week we’re helping you put your best foot forward with a list of London’s top 5 unusual shoe shops as rated by reviewers on Yelp. 5. Irregular Choice (Soho) If you like bright, bold and quirky, Irregular Choice on Carnaby Street is the place to head. 4.

42 Striking Shoe Campaigns. By: Tana Makmanee - Published: Jun 15, 2013 • References: Retailers are increasingly relying on clever advertising as a technique to draw in new buyers to their brand, and these striking shoe campaigns are some creative examples of how companies are using unique methods to attract consumers. 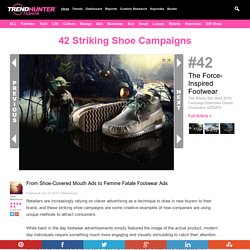 While back in the day footwear advertisements simply featured the image of the actual product, modern day individuals require something much more engaging and visually stimulating to catch their attention. City-Sole Ads : Reflex Spray campaign. Some people run actual marathons and some people simply feel like they have, the Reflex Spray campaign targets both of those very different groups. 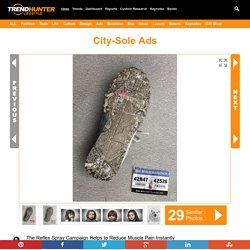 Whether muscle pain is brought on by too much exertion or something else entirely, this product will help ease the pain instantly. The Reflex Spray campaign was conceived and executed by Contrapunto, an ad agency based in Barcelona, Spain. Zappos. Because the foot is three-dimensional, any two-dimensional measuring tool, such as a ruler or Brannock device®, can only approximate your true shoe size. 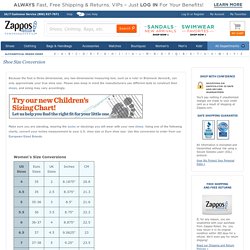 Please also keep in mind the manufacturers use different lasts to construct their shoes, and sizing may vary accordingly. Make sure you are standing, wearing the socks or stockings you will wear with your new shoes. Using one of the following charts, convert your inches measurement to your U.S. shoe size or Euro shoe size.

Cobbler Tailor Shoe Repair. Free 12 Month Cash Flow StatementForms. Profit and Loss Statement Excel Template. Business Planning Calculators - BPlans.co.uk. Profit and Loss Statement. Top 10 DIY Beauty Products For Foot Care. When buying beauty products we rarely think of buying some for our feet, until after we get home and we notice that our feet are sore, with cracked heels or even emit a nasty odor. We tend to forget that our whole body posture depend on having healthy and relaxed feet, so pay little attention to our feet until its too late and we’re left with pains in the feet, in our backs and even more serious problems if we neglected to tend to those foot fungus or cracked heels on time.

So give your feet a pampering and your whole body will be grateful. Gardener’s Herbal Foot Soak Recipe Recipe via gardentherapy.ca How to Get Dry Skin Off The Bottom of Your Feet Recipe via ehow.com DIY Rosemary Foot Soak & Olive Oil Scrub Recipe via abirdsleap.com Homemade Foot Powder & Spray Recipes: {Odor Helpers} Recipe via tipnut.com. Foot Health. Registered chiropodists/podiatrists are trained in all aspects of care for the feet and lower limbs, including the most common foot problems. Some problems are inherited, and some develop from illnesses in middle age, or from the pressure of ill-fitting shoes. Feet For Life The aim of the Feet For Life Campaign is to raise awareness amongst the general public that good foot health is an essential component to quality of life and podiatry is a key element of preventative medicine.Visit Feet For Life for more information.

Footwear at work. The working foot has a lot of demands made on it, and in a normal working day can easily travel fifteen miles. Just standing still can also put a lot of strain on our feet, so we need to take proper care of them, to help prevent injury and keep them working.There are a number of potential hazards at work which could lead to injury, such as oily or slippery floors, or machines which can crush or burn. Seven Tips for Your Design Job Interview. Advertisement I’m not the best web designer or graphic designer out there and I don’t claim to be, but I do have experience in getting jobs in the industry.

I’ve worked for all kinds of companies since graduating from high school. I’ve worked as a web designer, graphic designer, and also a front-end developer.

MA Footwear - London College of Fashion. Facts Content and Structure This MA course will provide students with a unique creative and technical platform to develop their own unique personal interest and methodology through design and technical skills, as well as their individual conceptual and critical thinking. The course aims to explore the link between the impossible and the achievable, to challenge aesthetics, to question function and challenge the discipline in order to redefine it. Entries open for new Drapers Footwear Awards graduate category.

F0115WE01X. Stop-Diabetes-From-Knocking-You-Off-Your-Feet.jpg (JPEG Image, 1203 × 1620 pixels) - Scaled (61%) Bulletin - Decades of change in the footwear industry. The design and production of comfortable, long-lasting and well-made footwear has been the goal of shoemakers around the world for thousands of years. As with so many other industries that have played a vital role in civilisation, little changed in the way shoes and boots were made until the coming of the industrial revolution towards the end of the 19th century. However, the real innovations in materials and processes used in the manufacture of footwear have arrived since SATRA was founded 90 years ago.

Although today footwear is produced using many similar methods to those employed all those years ago, obvious technological innovations in machinery, raw materials, production and testing techniques have changed what was to all intents and purposes a cottage industry into a multi-billion dollar sector. During all this time, SATRA has been providing assistance to footwear manufacturers and material suppliers around the world. Noë & Associates.

Over the past decade, the industry has grappled with competition from external vendors, such as clothing retailers and department stores. The shoe seduction. One in 10 women spend more than £1,000 a year on shoes while 8% own more than 100 pairs each, according to a new survey. The Average Woman Spends Almost $25,000 On Shoes In Her Lifetime! How About You?: Glamour.com. British women spent a staggering £3.5 billion on shoes in 2012... but two thirds never leave the closet. The average women owns 19 pairs of shoes but wears just seven One in 20 said they owned more than 50 pairs of high heelsChristian Louboutin was the most coveted shoe designer By Ruth Styles Published: 16:09 GMT, 21 February 2013 | Updated: 16:28 GMT, 21 February 2013.

How many pairs of shoes do you buy each year? Encyclopedia Britannica. Because psychological makeup, personal circumstances, and external influences all play a role in the formation of each person’s opinions, it is difficult to predict how public opinion on an issue will take shape. The same is true with regard to changes in public opinion. Some public opinions can be explained by specific events and circumstances, but in other cases the causes are more elusive.

25 Shocking Fashion Industry Statistics. Global Apparel and Footwear Market Update—2014. Posted by: Sheng Lu | March 24, 2014 According to the latest estimates from the Euromonitor International, the global apparel and footwear market grew by 5% in value terms in 2013 and will further increase by an incremental US$58 billion to 2018. Chapters. Aims and objectives so far 9/10/14. Footwear health problems. Photos. Printing options. Flat feet.