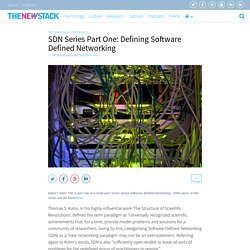 Kuhn, in his highly-influential work ‘The Structure of Scientific Revolutions’, defines the term paradigm as “universally recognized scientific achievements that, for a time, provide model problems and solutions for a community of researchers. Going by this, categorizing Software Defined Networking (SDN) as a “new networking paradigm’ may not be an overstatement.

Referring again to Kuhn’s words, SDN is also “sufficiently open-ended to leave all sorts of problems for the redefined group of practitioners to resolve”. SDN has been defined by different researchers in different terms, and the one which is more general and inclusive one is provided by Brandon Heller [1] is as follows: “SDN is about refactoring of the relationship between network devices and the software that controls them.” The data plane is responsible for processing the transit traffic, which decides what to do with packets arriving on an ingress interface. Figure 1 Planes of Network Elements. Building Skills for Future SDN Networks. SD-WAN: The Killer App For Enterprise SDN? Software-defined WAN technologies promise to help enterprises modernize their WANs by combining classic WAN technologies with SDN capabilities. 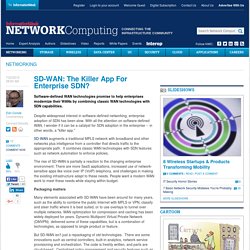 Despite widespread interest in software-defined networking, enterprise adoption of SDN has been slow. With all the attention on software-defined WAN, I wonder if it can be a catalyst for SDN adoption in the enterprise -- in other words, a "killer app. " SD-WAN augments a traditional MPLS network with broadband and other networks plus intelligence from a controller that directs traffic to the appropriate path. It combines classic WAN technologies with SDN features such as network automation to enforce policies. The rise of SD-WAN is partially a reaction to the changing enterprise environment: There are more SaaS applications, increased use of network-sensitive apps like voice over IP (VoIP) telephony, and challenges in making the existing infrastructure adapt to these needs.

SDN: Unshackling the Network Application Environment. The software defined network (SDN) is intended to provide greater coordination between underlying network infrastructure and the configuration and architectural needs of business applications. 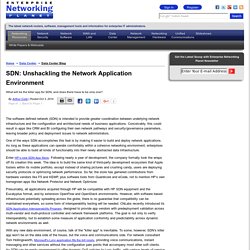 Conceivably, this could result in apps like CRM and BI configuring their own network pathways and security/governance parameters, leaving broader policy and deployment issues to network administrators. One of the ways SDN accomplishes this feat is by making it easier to build and deploy network applications. As long as these applications can operate comfortably within a cohesive networking environment, enterprises should be able to build all kinds of functionality into their newly abstracted data infrastructure. Enter HP’s new SDN App Store. Following nearly a year of development, the company formally took the wraps off its creation this week.

With any new data environment, of course, talk of the "killer app" is inevitable. Photo courtesy of Shutterstock. Why is Lync The Killer SDN Application? The key to showing the promise of SDN is to find a real-world application to showcase capabilities. 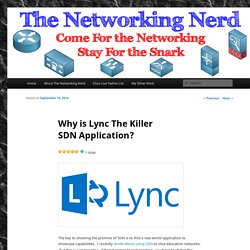 I recently wrote about using SDN to slice education networks. But this is just one idea. When it comes to real promise, you have to shelve the approach and trot out a name. People have to know that SDN will help them fix something on their network or optimize an troublesome program. Get Ready for Software-Defined Networking in the Enterprise. Get Ready for Software-Defined Networking in the Enterprise Though originating in academic exercises and graduating from proof-of-concept testing labs to initial adoption by Web-scale giants, carriers, service providers and telecom operators, software-defined networking (SDN) is heading for the enterprise. 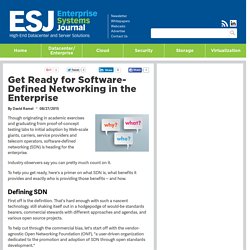 Industry observers say you can pretty much count on it. To help you get ready, here's a primer on what SDN is, what benefits it provides and exactly who is providing those benefits -- and how. Defining SDNFirst off is the definition. That's hard enough with such a nascent technology, still shaking itself out in a hodgepodge of would-be standards bearers, commercial stewards with different approaches and agendas, and various open source projects. To help cut through the commercial bias, let's start off with the vendor-agnostic Open Networking Foundation (ONF), "a user-driven organization dedicated to the promotion and adoption of SDN through open standards development.

" Is SDN Ready For The Enterprise? Software defined networking (SDN) has been floating around for the last few years but it has mainly been in the eye-line of carriers looking to rapidly provision networks. 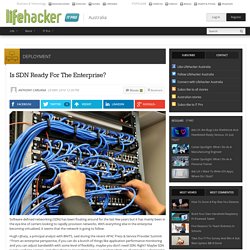 With everything else in the enterprise becoming virtualised, it seems that the network is going to follow. Hugh Ujhazy, a principal analyst with BNITS, said during the recent APAC Press & Service Provider Summit :”From an enterprise perspective, if you can do a bunch of things like application performance monitoring and you can adjust bandwidth with some level of flexibility, maybe you don’t need SDN. Five reasons IT pros are not ready for SDN investment. SDN is slowly becoming a reality in supersized enterprises that need high performance networks at any cost, but the landscape is quite different among large and medium-sized organizations. 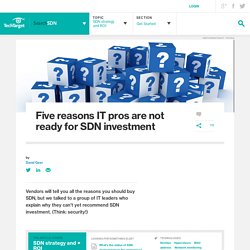 While vendors are actively productizing SDN, and analysts predict solid uptake by 2016, most enterprise network engineers say they won't be ready for SDN investment until a few key concerns are addressed. A group of IT leaders interviewed for this article cited concerns ranging from diminished security performance to a lack of SDN standards, which will prevent them from recommending SDN investment, at least in the short term. SDN investment concern No. 1: Security and monitoring performance IT staff are first and foremost fearful that security monitoring will suffer when the SDN stack jointly meets the hypervisor and the physical infrastructure. I don't need vendor white papers, webinars, or breakfast symposiums. Is SDN ready for the Enterprise. Is SDN Ready For The Enterprise? SDN%20Mock%20RFI. Networking Without Limits: SDN - In the Cloud. After nearly 40 years of creating enterprise software, there are few companies who have come to appreciate the importance of infrastructure in the quite the way we have at Microsoft. 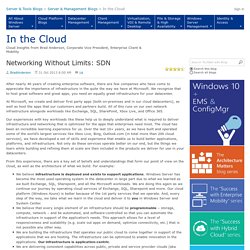 We recognize that to host great software and great apps, you need an equally great infrastructure for your datacenter. At Microsoft, we create and deliver first party apps (both on-premises and in our cloud datacenters), as well as host the apps that our customers and partners build. All of this runs on our own network infrastructure alongside workloads like Exchange, SQL, SharePoint, Xbox Live, and Office 365. Using Python to design, configure, and measure large-scale networks. Integration of Hypervisors & L4-7 Services with ACI from Cisco Live. Cisco ACI Programmability and Automation. Tech Field Day. Cisco ACI Programmability Demo. Best Software Defined Networking (SDN) Controllers. Let's take a closer look at some open source as well as commercial software defined networking solutions. 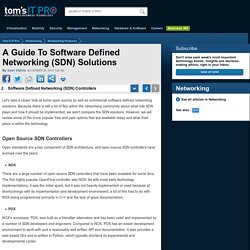 Because there is still a lot of flux within the networking community about what role SDN plays and how it should be implemented, we won't compare the SDN solutions. However, we will review some of the more popular free and paid options that are available today and what their place is within the technology. Preparing your teams for software defined networking. Infrastructure and operations (I&O) teams are aligning themselves and infrastructure around key workloads to drive greater simplicity and efficiency. 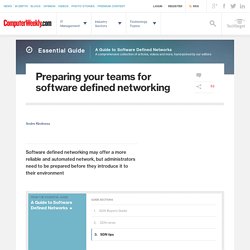 In kind, the networking industry has responded by suggesting that networks can provide greater support for this approach using the OpenFlow protocol and Software Defined Networking (SDN) concepts. SDN and NFV: Show me the business benefits. Believe it not, software-defined networking (SDN) is not about network gymnastics alone.

We hear so much about the amazing things SDN can do in the network—flexibility, automation, virtualization, orchestration. But we don't hear enough about how SDN will meet business goals. Rivka Gewirtz Little As with any new, groundbreaking technology, it's fun to focus on the wow factor. But it's crucial to ask the hard questions about these new features: Do they result in a capital savings? Because there is so little SDN in production right now, there are not enough answers. In this issue of Network Evolution, SearchNetworking editor Chuck Moozakis talks to engineers about how they are navigating the path to network upgrade keeping in mind the eventual implementation of SDN.

More carrier solutions will continue to emerge as operators further deploy these technologies. We'll be here to tell the story as it unfolds. SDN essentials: Why network orchestration and virtualization? Editor's note: This is the second half of a two-part series on understanding SDN basics. In the first part, we... explained the concepts of centralized control and network programmability. Here we explore network orchestration and network virtualization. One of the key goals of SDN is to implement flexible networks that can be dynamically provisioned. SDN's missing links: Five barriers blocking SDN adoption by providers. What is the difference between SDN and NFV?

What is the difference between SDN and NFV? By submitting your email address, you agree to receive emails regarding relevant topic offers from TechTarget and its partners. You can withdraw your consent at any time. Contact TechTarget at 275 Grove Street, Newton, MA. You also agree that your personal information may be transferred and processed in the United States, and that you have read and agree to the Terms of Use and the Privacy Policy. Cisco to open SDN framework to nonpartner products. Cisco plans to make the next version of its software-defined networking (SDN) platform more flexible by letting...

By submitting your email address, you agree to receive emails regarding relevant topic offers from TechTarget and its partners. You can withdraw your consent at any time. Contact TechTarget at 275 Grove Street, Newton, MA. You also agree that your personal information may be transferred and processed in the United States, and that you have read and agree to the Terms of Use and the Privacy Policy. companies add load balancers, firewalls and other Layer 4-7 (L4-7) services from non-Cisco partners. The upcoming Application Centric Infrastructure (ACI) upgrade, code-named Brazos, will provide what Cisco calls an "unmanaged mode" for integrating third-party services into the SDN framework. Today, ACI has a single "managed mode" that can chain services only from vendors with products certified for the ACI API.

It would also give network operators the ability to quickly modify or customize their network control. However, the Open Networking Foundation (ONF), a consortium dedicated to promoting and commercializing software-defined networking, has avoided the issue of northbound API standardization for fear of stifling innovation. As a result, more than 20 different SDN controllers are currently available, featuring northbound APIs that vary based on the needs of the applications and orchestration systems above it.

So in 2012, the ONF started a northbound API discussion group, which it rolled into its Architecture and Framework Working Group. SDN showdown: Examining the differences between VMware's NSX and Cisco's ACI. Your Network's Next Step: Cisco ACI Or VMware NSX. Why you shouldn't overlook Microsoft SDN. Basic elements of Microsoft network virtualization. Why is Lync The Killer SDN Application? UnderstandingSDNTechV1. The Lippis Report » Download Library » Lippis Report 207: The Killer SDN Applications: Network Virtualization and Visualization.