Sharing happening news of beautiful Pakistan and all over. From local Pakistan news to international involvement and achievements of Pakistan all over the world will be discused. 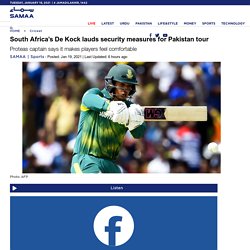 The wicketkeeper-batsman is leading the Proteas to their first tour of the Asian country in more than 13 years. The side are scheduled to play two Tests and three T20Is starting from January 26. The 28-year-old, while talking to the media in a virtual press conference, admitted that they were concerned with the security measures being taken ahead of departure but protocols have allowed them to pay attention to their game. “When we were coming here, security was a concern, if not the biggest concern,” he was quoted saying on the website. “And then we landed here, we saw the security that was going on and everyone became calmer. Related: South Africa team arrive in Karachi for Test, T20I series. SAMAA - Explainer: This is what WhatsApp knows about you. WhatsApp recently updated its privacy policy, forcing users to accept their data will be shared with Facebook, or else their accounts will be deleted. 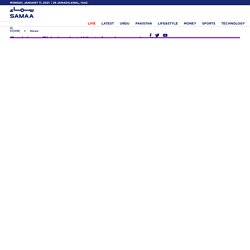 Data being shared? What does that mean? What data are we talking about? All websites and apps (services) that we use know some things about us. The most basic piece of information is when we opened the service, how long we used it and when we left. Some pieces of information are so commonly shared with online services, they are effectively public information – your IP address and what browser you are using. Food of Pakistan: 10 famous dishes from its provinces - Webcube360. One thing that Pakistan takes pride in is its food. 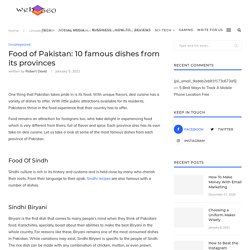 With unique flavors, desi cuisine has a variety of dishes to offer. With little public attractions available for its residents, Pakistanis thrive in the food experience that their country has to offer. Food remains an attraction for foreigners too, who take delight in experiencing food which is very different from theirs, full of flavor and spice. SAMAA - Why Khula cases increased in 2020? Pakistani Cinema: What the future holds in store? - The Charm Guide. It is no news that the coronavirus outbreak turned lives upside down this year. 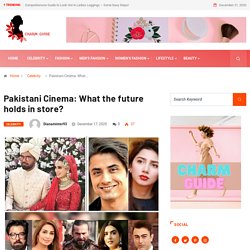 Anything planned for 2020 either got postponed, cancelled or changed the way it was supposed to take place. People, organizations, businesses and so much got affected by the global pandemic that sustaining has become the focus over recovering. HSY announces acting debut with drama serial Pehli Si Mohabbat - Cutacut.com. KARACHI: Fashion designer Hassan Sheheryar Yasin (HSY) has been at the top of his game when it comes to couture in Pakistan. 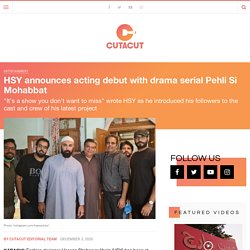 Here Are 5 Top Famous Foods OF Pakistan – Pakistan News. One of the fundamental attractions of Pakistan remains its food. 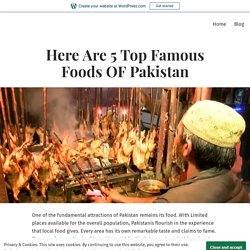 With Limited places available for the overall population, Pakistanis flourish in the experience that local food gives. Every area has its own remarkable taste and claims to fame. There are famous foods of Balochistan While Sindh brags about its biryani and Punjab gets varieties of paye, and much more to explore. SAMAA - Biden as president: second chance to improve US-Pakistan relations. Joe Biden’s ascent to the US presidency is cause for both celebration and speculation in Pakistan. 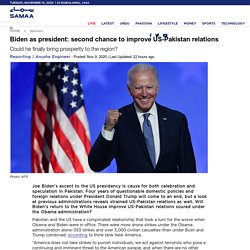 Four years of questionable domestic policies and foreign relations under President Donald Trump will come to an end, but a look at previous administrations reveals strained US-Pakistan relations as well. Will Biden’s return to the White House improve US-Pakistan relations soured under the Obama administration? Pakistan and the US have a complicated relationship that took a turn for the worse when Obama and Biden were in office. There were more drone strikes under the Obama administration alone–353 strikes and over 3,000 civilian casualties–than under Bush and Trump combined, according to think tank New America. 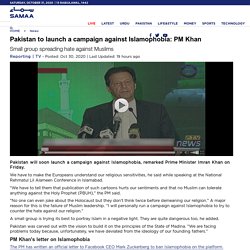 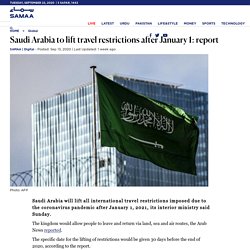 The kingdom would allow people to leave and return via land, sea and air routes, the Arab News reported. The specific date for the lifting of restrictions would be given 30 days before the end of 2020, according to the report. SAMAA - Despite withdrawals, organisers remain upbeat for US Open 2020. HOME > Sports SAMAA | AFP - Posted: Aug 19, 2020 | Last Updated: 3 hours ago Posted: Aug 19, 2020 | Last Updated: 3 hours ago The United States Tennis Association (USTA) has stated that they are more than satisfied with the number of players which are taking part in this year’s US Open. 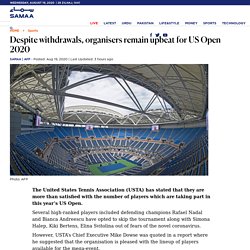 Several high-ranked players included defending champions Rafael Nadal and Bianca Andreescu have opted to skip the tournament along with Simona Halep, Kiki Bertens, Elina Svitolina out of fears of the novel coronavirus. SAMAA - Pakistani YouTubers Ducky Bhai, Irfan Junejo explain registering channels abroad. YouTubers Saadur Rehman aka Ducky Bhai and Irfan Junejo have responded to the criticism they received from Pakistani Twitter users for registering their channels in the US and India. Ducky, who has over 1.97 million subscribers on his YouTube channel, says the platform hasn’t yet proposed the Superchat and Channel Membership features in Pakistan.

SAMAA - What happened to Ayodhya’s Babri Masjid? Indian Prime Minister Narendra Modi will on Wednesday lay the foundation for a temple in Ayodhya, a flashpoint holy site, exactly a year after imposing direct rule on Muslim-majority Kashmir. The temple site is where the Babri Mosque once stood. Devout Hindus believe that Lord Ram, the warrior god, was born there some 7,000 years ago but that a mosque was constructed on top of his birthplace in the 16th century.

In the 1980s a Hindu movement began to agitate for the mosque to be removed and in 1992 a mob demolished it with shovels, pickaxes and their bare hands. A lengthy legal battle ensued but on November 9, in a major victory for the BJP, India’s Supreme Court awarded the site to Hindus, allowing a temple “touching the sky” to be built. Pakistan had protested the decision, saying the verdict failed to uphold the demands of justice. The November court case. How is Hajj 2020 different from previous years? - SAMAA. Joe Jonas, Sophie Turner welcome first child - SAMAA. HOME > Entertainment SAMAA | Digital - Posted: Jul 28, 2020 | Last Updated: 1 hour ago Posted: Jul 28, 2020 | Last Updated: 1 hour ago Game of Thrones actor Sophie Turner has given birth to a baby girl. According to TMZ, Joe Jonas and Turner welcomed their daughter, Willa, last Wednesday in Los Angeles.

The pair’s reps later confirmed the news in a statement to People.