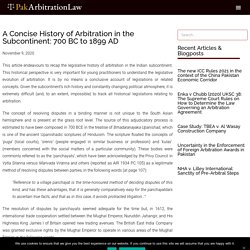 This historical perspective is very important for young practitioners to understand the legislative evolution of arbitration. It is by no means a conclusive account of legislations or related concepts. Given the subcontinent’s rich history and constantly changing political atmosphere, it is extremely difficult (and, to an extent, impossible) to track all historical legislations relating to arbitration. Court’s Intervention in Enforcement of Arbitral Awards: An Impediment to the Pro-Enforcement Bias of the New York Convention 1958? 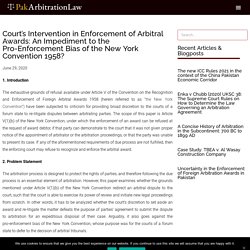 Introduction. Beyond the Need for Neutrality: An Approach to Ameliorating the Arbitral Process via Regional Hubs. It is customary for a seat of an international arbitration proceeding to be chosen keeping in mind the “neutrality principle.” 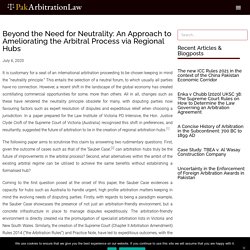 This entails the selection of a neutral forum, to which usually all parties have no connection. However, a recent shift in the landscape of the global economy has created scintillating commercial opportunities for some, more than others. All in all, changes such as these have rendered the neutrality principle obsolete for many, with disputing parties now favouring factors such as expert resolution of disputes and expeditious relief when choosing a jurisdiction. In a paper prepared for the Law Institute of Victoria PD Intensive, the Hon. 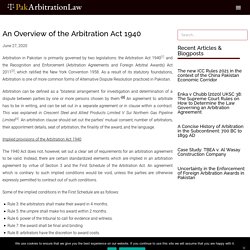 As a result of its statutory foundations, Arbitration is one of more common forms of Alternative Dispute Resolution practiced in Pakistan. Arbitration can be defined as a “bilateral arrangement for investigation and determination of a dispute between parties by one or more persons chosen by them.” An agreement to arbitrate has to be in writing, and can be set out in a separate agreement or in clause within a contract. This was explained in Crescent Steel and Allied Products Limited V Sui Northern Gas Pipeline Limited. Alternate Dispute Management - Online Law knowledge sharing platform.

Pakistan Arbitration Law online portal has been established as an online knowledge-sharing platform, solely focused on promoting the understanding and awareness of arbitration in Pakistan. 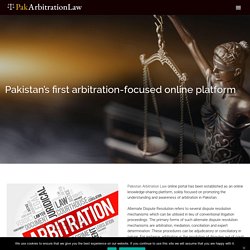 Alternate Dispute Resolution refers to several dispute resolution mechanisms which can be utilisied in lieu of conventional litigation proceedings. The primary forms of such alternate dispute resolution mechanisms are arbitration, mediation, conciliation and expert determination. These procedures can be adjudicatory or conciliatory in nature. For instance, arbitration is the resolution of disputes out of court through privately appointed judges (called arbitrators); whereas, mediation is a process whereby a third party facilitates negotiation and settlement talks between disputing parties without rending any binding judgment on the dispute. Owing to the swiftness and low costs of the process, alternate dispute resolution mechanisms are increasingly becoming popular in the commercial disputes arena. An Overview of the Arbitration Act 1940. An Overview of the Arbitration Act 1940. Unilateral Arbitration Clauses: Potential Challenges to the Enforcement of Foreign Awards in Pakistan.

Unilateral arbitration clauses (UACs) allow one party the discretion to choose between a specific forum and mode of dispute resolution, such as litigation or arbitration, while binding the other party to that choice. 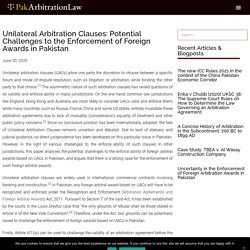 The asymmetric nature of such arbitration clauses has raised questions of its validity and enforce ability in many jurisdictions. On the one hand, common law jurisdictions like England, Hong Kong and Australia are most likely to consider UACs valid and enforce them; while many countries, such as Russia, France, China and some US states, entirely invalidate these arbitration agreements due to lack of mutuality (consideration), equality of treatment and other public policy concerns.

Since no conclusive position has been internationally adopted, the fate of Unilateral Arbitration Clauses remains uncertain and debated. Due to lack of statuary and judicial guidance, no direct jurisprudence has been developed on this particular issue in Pakistan. Alternate Dispute Management - Online Law knowledge sharing platform. A Concise History of Arbitration in the Subcontinent: 700 BC to 1899 AD.

Uncertainty in the Enforcement of Foreign Arbitration Awards in Pakistan. Mandatory Mediation: An English Law Perspective. Mediation is an effective way of resolving disputes without the need to go to court. 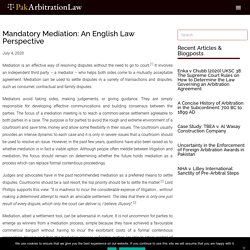 It involves an independent third party – a mediator – who helps both sides come to a mutually acceptable agreement. Mediation can be used to settle disputes in a variety of transactions and disputes, such as consumer, contractual and family disputes. Mediators avoid taking sides, making judgements, or giving guidance. They are simply responsible for developing effective communications and building consensus between the parties. The focus of a mediation meeting is to reach a common-sense settlement agreeable to both parties in a case. Judges and advocates have in the past recommended mediation as a preferred means to settle disputes. Mediation, albeit a settlement tool, can be adversarial in nature. There are, however, certain ways in which the use of mediation can be improved. Lord Woolf’s ‘Access to Justice’ report was published just before the CJR (Criminal Justice Review) in Ontario. 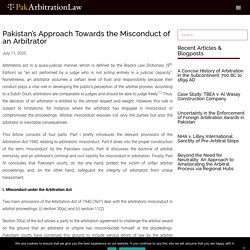 Nonetheless, an arbitrator assumes a certain level of trust and responsibility because their conduct plays a vital role in developing the public’s perception of the arbitral process. According to a Dutch Court, arbitrators are comparable to judges and should be able to judge freely. Thus, the decision of an arbitrator is entitled to the utmost respect and weight. However, this rule is subject to limitations; for instance, where the arbitrator has engaged in misconduct or compromised the proceedings. Arbitral misconduct exposes not only the parties but also the arbitrator to inevitable consequences. This Article consists of four parts. 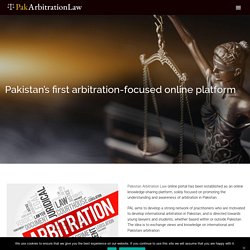 PAL aims to develop a strong network of practitioners who are motivated to develop international arbitration in Pakistan, and is directed towards young lawyers and students, whether based within or outside Pakistan. The idea is to exchange views and knowledge on international and Pakistani arbitration. Presently, the emphasis will be on sharing publications on relevant issues of international and domestic arbitration, as well as engaging in dialogue through our online discussion forum. Young practitioners and law students are, therefore, asked to restrict their submissions to arbitration-related topics only. Professionals from other backgrounds are also welcome to participate. 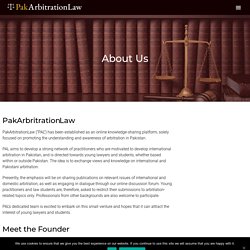