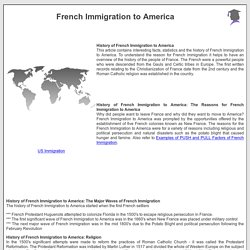 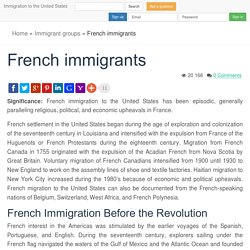 French settlement in the United States began during the age of exploration and colonization of the seventeenth century in Louisiana and intensified with the expulsion from France of the Huguenots or French Protestants during the eighteenth century. Migration from French Canada in 1755 originated with the expulsion of the Acadian French from Nova Scotia by Great Britain. Voluntary migration of French Canadians intensified from 1900 until 1930 to New England to work on the assembly lines of shoe and textile factories.

Haitian migration to New York City increased during the 1980’s because of economic and political upheavals. French migration to the United States can also be documented from the French-speaking nations of Belgium, Switzerland, West Africa, and French Polynesia. French immigration » Immigration to North America. As one of the founding nations of colonial Canada, the French helped define the political and cultural character of the modern country. 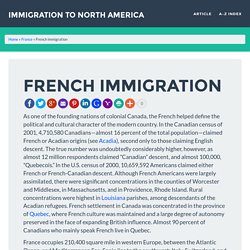 Specialty Meat. Many are hand cut by the pound, fresh to order, using a hand-crank Berkel machine, giving you the perfect slice. 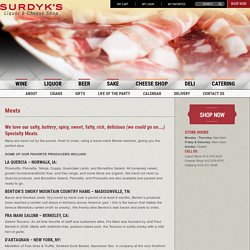 Some of our favorite producers include: La Quercia – Norwalk, IA: Prosciutto, Pancetta, ‘Nduja, Coppa, Guanciale Lardo, and Borsellino Salami. All humanely raised, growth hormone/antibiotic free, and free range, and some items are organic. Appellation. An appellation is a legally defined and protected geographical indication used to identify where the grapes for a wine were grown; other types of food often have appellations as well. 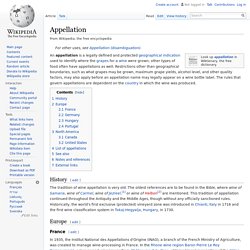 Restrictions other than geographical boundaries, such as what grapes may be grown, maximum grape yields, alcohol level, and other quality factors, may also apply before an appellation name may legally appear on a wine bottle label. The rules that govern appellations are dependent on the country in which the wine was produced. History[edit] French Wine Appellations Overview. Introduction One of the keys that unlocks an understanding of French wines is some knowledge of the regions and, within those, the appellations of France. 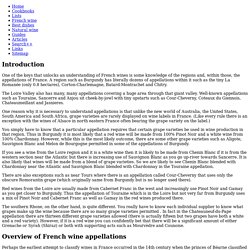 A region such as Burgundy has literally dozens of appellations within it such as the tiny La Romanée (only 0.8 hectares), Corton-Charlemagne, Batard-Montrachet and Chitry. The Loire Valley also has many, many appellations covering a huge area through that giant valley. Well-known appellations such as Touraine, Sancerre and Anjou sit cheek-by-jowl with tiny upstarts such as Cour-Cheverny, Coteaux du Giennois, Chateaumeillant and Jasnieres. One reason why it is necessary to understand appellations is that unlike the new world of Australia, the United States, South America and South Africa, grape varieties are rarely displayed on wine labels in France. You simply have to know that a particular appellation requires that certain grape varieties be used in wine production in that region. Principals Share Parent Involvement Ideas. From time to time, Education World updates and reposts a previously published article that we think might be of interest to administrators. 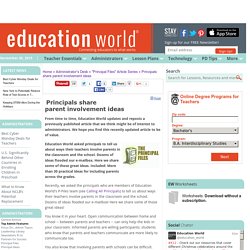 You know it in your heart. You also know that involving parents with schools can be difficult. Mary Ellen Imbo makes extra effort to involve parents -- to coax them if necessary -- in their children's school. A Dozen Activities to Promote Parent Involvement. Research shows that children are more likely to succeed academically and are less likely to engage in violent behavior if their families are involved in their education. 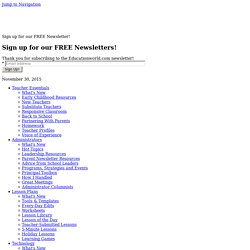 Many parents say, however, that they feel unwelcome or uncomfortable in their children's schools. Teachers often feel under attack by parents who are highly involved. Learn how to bridge the gap. Included: A dozen activities to promote parental involvement and ten tips for involved parents. The following quote comes from Fathers' Involvement in Their Children's Schools, a report from the National Center for Education Statistics. Additional studies have found that parental involvement is more important to student success, at every grade level, than family income or education. Build a bridge Be sure the first contact with parents is a positive one.

The National PTA has also set the following National Standards for Parent/Family Involvement Programs: Establish regular, meaningful communication between home and school. What if we talked about monolingual White children the way we talk about low-income children of color? I have written a previous post debunking the so-called language-gap. 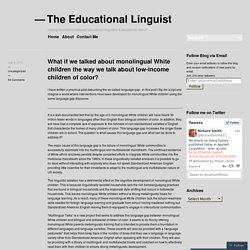