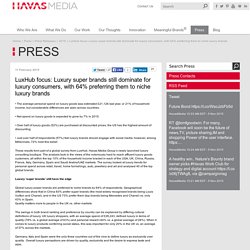 Consumer & Shopper Insights. After a slow start, luxury fashion has earned its place in the digital universe. 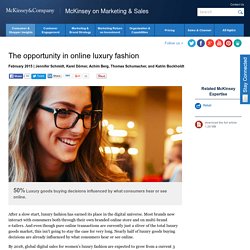 Most brands now interact with consumers both through their own branded online store and on multi-brand e-tailers. And even though pure online transactions are currently just a sliver of the total luxury goods market, this isn’t going to stay the case for very long. Nearly half of luxury goods buying decisions are already influenced by what consumers hear or see online. By 2018, global digital sales for women’s luxury fashion are expected to grow from a current 3 percent of the total market to 17 percent, for a total market size of $12 billion.

Propelling this surge is solid market growth in developed, Western markets and exceptional expansion in China. Luxury Shopping – The Top 7 Trends. Duty Free Shopping Benefits as Result Duty free shopping has increased by an average annual rate of 26 per cent since 2009, according to the shopping tourism firm Global Blue. 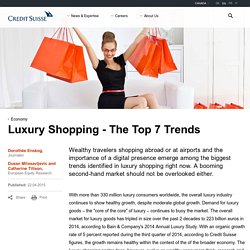 Luxury brand owners are thus expanding their presence at international airports, where busy affluent travelers take the time to shop between the security check and their gate. The rapid rise in Chinese travelers just mentioned is another reason behind the surge in duty free shopping. Data from Ipsos' 2015 Chinese Luxury Forecast survey shows that more than half of the respondents from mainland China indicated that they had shopped at duty free stores when traveling abroad in 2014, citing dissatisfaction with the service offered at luxury retail shops at home as a reason. Digital Presence More Important Than Ever Luxury shoppers use social networks such as Facebook or Twitter, but mainly to carry out research about products or to retweet other people's posts. 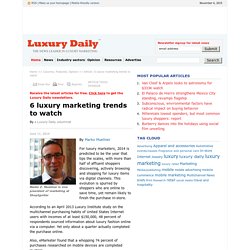 Muellner is vice president of marketing at ShopIgniter By Marko Muellner For luxury marketers, 2014 is predicted to be the year that tips the scales, with more than half of affluent shoppers discovering, actively browsing and shopping for luxury items via digital channels. This evolution is spurred by shoppers who are online to save time, yet remain likely to finish the purchase in-store. According to an April 2013 Luxury Institute study on the multichannel purchasing habits of United States Internet users with incomes of at least $150,000, 48 percent of respondents sourced information about luxury fashion online via a computer.

Also, eMarketer found that a whopping 74 percent of purchases researched on mobile devices are completed in-store. Which brings me to the first trend to watch: Mobile We tend to think of mobile consumers as similar to desktop consumers, but on different devices. Assessing the Environmental Impact of the Fashion World · Environmental Leader · Environmental Management News. For the third year, more than a thousand decision makers and thought leaders from 34 countries gathered for the Copenhagen Fashion Summit. 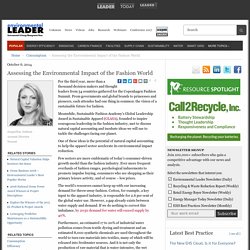 From governments and global brands to princesses and pioneers, each attendee had one thing in common: the vision of a sustainable future for fashion. Meanwhile, Sustainable Fashion Academy’s Global Leadership Award in Sustainable Apparel (GLASA), founded to inspire courageous leadership in the fashion industry, met to discuss natural capital accounting and incubate ideas we will use to tackle the challenges facing our planet. One of these ideas is the potential of natural capital accounting to help the apparel sector accelerate its environmental impact reduction. Few sectors are more emblematic of today’s consumer-driven growth model than the fashion industry. Ever more frequent overhauls of fashion ranges, psychological inducements to promote impulse buying, consumers who see shopping as their primary leisure activity, and of course – low prices. How many people use social media - Recherche Google.

The Macroenvironmental Factors Affecting the Clothing Industry. Donatella Versace Launches a Tote Bag to Support Children's Charities. The most fearsome Halloween nightmare has nothing to do with ghouls, goblins, or even the undead—it has to do with costumes, of course. 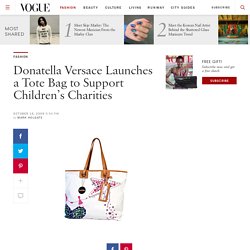 Imagine, if you will, the mortification of arriving at a Halloween party only to realize that you’re wearing the same, store-bought costume as one, two—uh, oh—three other people. That is a real-world terror any sane woman is keen to avoid. So, on this All Hallows’ Eve, ditch the bag costumes and turn your eye to the Spring 2016 runways, where designers from Marc Jacobs to Vetements provide inspiration for how to turn some of Halloween’s most iconic costumes into jaw-dropping looks. Find our suggestions in the slideshow below to make sure you’re the star of the party. Louis Vuitton Core Values campaign supports multiple charities. Bono and Ali Hewson wear their Edun line in the Louis Vuitton Journeys ad. 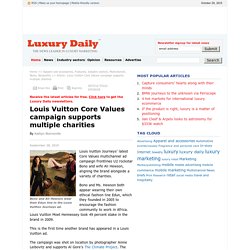 Louis Vuitton Journeys’ latest Core Values multichannel ad campaign frontlines U2 rockstar Bono and wife Ali Hewson, aligning the brand alongside a variety of charities. Bono and Ms. Hewson both appear wearing their own ethical fashion line Edun, which they founded in 2005 to encourage the fashion community to work in Africa. Louis Vuitton Moet Hennessey took 49 percent stake in the brand in 2009. This is the first time another brand has appeared in a Louis Vuitton ad. The campaign was shot on location by photographer Annie Leibovitz and supports Al Gore’s The Climate Project.

Here is a screen grab of the ad on the Luis Vuitton Web site: Though Bono and Ms. It is Louis Vuitton’s first product made in Africa and a portion of its sales go to TechnoServe and Conservation Cotton Initiative. TechnoServe helps people in developing countries build profitable businesses, encouraging economic growth. Versace enters second phase of its expansion scheme - Design - Fashion-news. Luxury Sales to Exceed $318 Billion, Driven by Emerging Markets and ‘Affordable Luxury’ 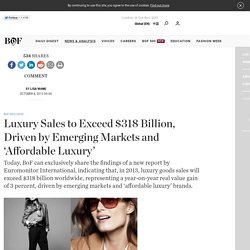 Despite continued macroeconomic uncertainty and sluggish profit reports from major luxury brands, Euromonitor remains optimistic about the industry’s growth prospects. Buoyed by a burgeoning middle class in emerging markets across Latin America, Asia Pacific and Africa, in 2013, luxury goods sales will exceed $318 billion worldwide, representing a year-on-year real value gain of 3 percent (compared to a year-on-year real value gain of over 4 percent last year), according to the report. Spending is projected to increase by more than 35 percent over the next five years. Emerging Markets In 2012, Mexico overtook Brazil to become Latin America's biggest luxury goods market. Versace aims for younger, digital-savvy consumers with Versus rebrand. Versus teaser image Italian fashion house Versace is aiming at urban, digitally-savvy consumers with the relaunch campaign for its Versus line. 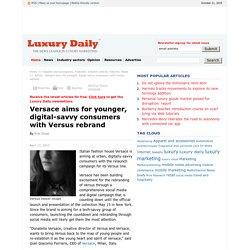 Versace has been building excitement for the rebranding of Versus through a comprehensive social media and digital campaign that is counting down until the official launch and presentation of the collection May 15 in New York. Since the brand is aiming for a tech-savvy group of consumers, launching the countdown and rebranding through social media will likely get them the most attention. Versace aims for younger, digital-savvy consumers with Versus rebrand. Forbes Welcome. The Tragic Decline of the House of Versace. How the House of Versace went from rags to riches—and back again. 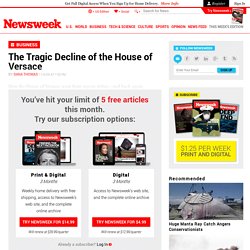 You’ve hit your limit of 5 free articles this month.Try our subscription options: House of Versace: The Untold Story of Genius, Murder, and Survival - Deborah Ball. Donatella Versace on Britpop, Instagram and why elitist fashion is over. My meeting with Donatella Versace begins with a misunderstanding worthy of a sitcom. I’ve been told by Anthony Vaccarello, creative director of Versus, Versace’s diffusion label, that the new collection launching in Shoreditch tonight is inspired by Brett Anderson and 1990s Britpop. So, seated next to her on a sofa in a Claridge’s suite, I ask if she is a fan of Suede. She drags on her e-cigarette and widens her dark-lidded eyes. The House of Versace is known for its iconic styling, superior quality, and exquisite design. Versace takes craftsmanship and creativity to new heights, continually redefining style for celebrities and consumers alike.

As one of the world’s leading fashion brands, we look to Versace for new trends, yet one of its most iconic elements, the Greek key design, dates back to ancient Greece. Classic Antiquity Meets Contemporary Fashion The Greek key is made of an interlocking rectangular pattern constructed from one continuous line. Fanatical About Fashion Blog. The first Versace boutique was open in 1928, Milan, Italy. The popularity of the fashion label was almost immediate. The fashion label at present has turned into an empire of diversification in terms of business selling items such as home interior, beauty products, aftershave, perfume, Versace couture jeans, men’s apparel, woman’s apparel, couture evening wear, high fashion clothing and they even have the Versace Palazzo hotel on the gold coast of Australia and also there is construction of a hotel in Dubai.

Basically since the day Versace launched it has grown ever since and became a conglomerate of businesses. The Founder: Beneath this hugely successful business is the very guy that started it, Gianni Versace. Birmingham City University - Sign In. Brand History – Versace Official Website. This year’s 2009 annual black-tie Whitney Museum’s benefit held at the Whitney Museum in New York Monday October 19th, 2009 was sponsored by Versace and hosted by Museum Chairman Adam Weinberg, Donatella Versace, and Liz Swig. Honoring Leonard A. Lauder, the evening began with cocktails in Robert J.

“At this moment in time, the top line looks very encouraging,” Chief Executive Officer Gian Giacomo Ferraris said Thursday by phone. “Sales are going really well” and the company expects to benefit from the weak euro, he said. Fashion's luxury brands are trying their luck in smaller British cities in a bid to boost sales.