Keele University > School of Mathematics and Computer Science > Research Groups > Information. This has mainly involved the Verifier approach, developed by Gordon Rugg and Joanne Hyde, which is a synthesis of several different approaches and bodies of research. 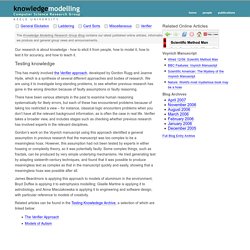 We are using it to investigate long-standing problems, to see whether previous research has gone in the wrong direction because of faulty assumptions or faulty reasoning. There have been various attempts in the past to examine human reasoning systematically for likely errors, but each of these has encountered problems because of taking too restricted a view – for instance, classical logic encounters problems when you don’t have all the relevant background information, as is often the case in real life. Verifier takes a broader view, and includes stages such as checking whether previous research has involved experts in the relevant disciplines. Gordon’s work on the Voynich manuscript using this approach identified a general assumption in previous research that the manuscript was too complex to be a meaningless hoax.

Keele University > School of Mathematics and Computer Science > Research Groups > Information. January 26th, 2006 Download full paper (doc - 44kb) In brief This is an approach for re-examining difficult research questions where researchers appear to have all the main pieces of the puzzle, but can’t get them to fit together into a coherent picture. 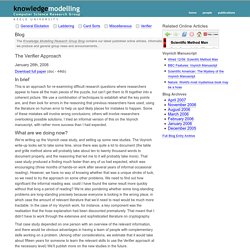 We use a combination of techniques to establish what the key points are, and then look for errors in the reasoning that previous researchers have used, using the literature on human error to help us spot likely places for mistakes to happen. Interesting brain-related resources on the web. The last months have been an occasion for me to go around the web and I found some great resources for people interested in learning about neuroscience. 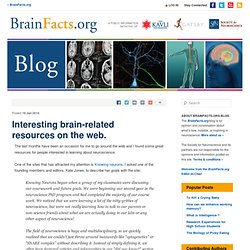 One of the sites that has attracted my attention is Knowing neurons. I asked one of the founding members and editors, Kate Jones, to describe her goals with the site: Paper rejected and Health2.0. Sorry for the silence these last few weeks! 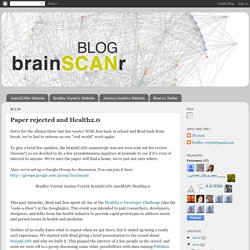 With Jess back in school and Brad back from break, we've had to refocus on our "real world" work again. To give a brief few updates, the brainSCANr manuscript was not even sent out for review (hooray!) So we decided to do a few presubmission inquiries at journals to see if it's even of interest to anyone. 4 Ways to Supercharge Your Working Memory for Free.

Working memory is “the ultimate evolutionary tool” that has helped us create everything from Google to the Eiffel Tower, according to authors and researchers Tracy Packiam Alloway , Ph.D, and Ross Alloway, Ph.D, in their new book The Working Memory Advantage: Train Your Brain to Function Stronger, Smarter, Faster . 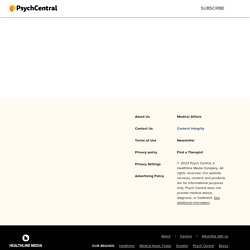 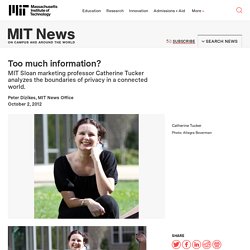 Her unborn children were diagnosed with twin-to-twin transfusion syndrome, a dangerous condition in which one twin acquires too much blood and the other loses too much. Before the advent of new medical technologies within the last 30 years, the survival rate of twins with the syndrome was less than 10 percent. Tucker flew to Florida for specialized surgery, but found trouble getting her medical records sent there.

Our Underachieving Colleges: A Candid Look at How Much Students Learn and ... - Derek Bok. When Children and Adults Do Not Use Learning Strategies: Toward a Theory of Settings. Abstract Strategies enhance learning. 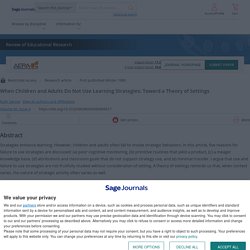 However, children and adults often fail to invoke strategic behaviors. In this article, five reasons for failure to use strategies are discussed: (a) poor cognitive monitoring, (b) primitive routines that yield a product, (c) a meager knowledge base, (d) attributions and classroom goals that do not support strategy use, and (e) minimal transfer. Information theory in neuroscience. Bhm028 29..37 - 29.full.pdf. Enhancing Learning_Pashler.pdf. Memory and the Importance of Review. [ Learning Home ][ Topics Menu ][ Study Skills ][Concepts of Learning ] [ Web Site Resources ][ BC3 Help Resources ][ Learning Site Map ] Memory "We remember what we understand; we understand only what we pay attention to; we pay attention to what we want. 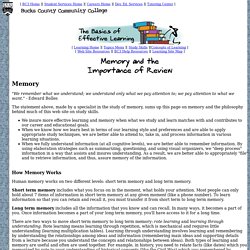 " - Edward Bolles The statement above, made by a specialist in the study of memory, sums up this page on memory and the philosophy behind much of this web site on study skills. We insure more effective learning and memory when what we study and learn matches with and contributes to our career and educational goals. The Paradox of Learning and Forgetting - Online College Degree Articles.

The ability to quickly and accurately recall facts and figures may serve you well if you ever go on a game show, but it doesn't necessarily mean that any profound learning has taken place. 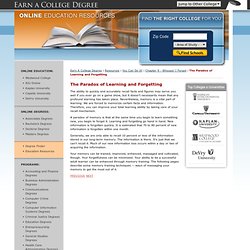 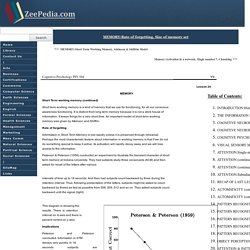 MEMORY:Rate of forgetting Size of memory set Cognitive Psychology Social Sciences Psychology. 041833.tif.pdf - ED041833. Gnitive Psychology: A Student's Handbook. Chapter 6: Learning and memory Ask Yourself Is it true that some people forget that they were abused in childhood? Can I do better in exams if I'm in the same mood when I take the test as I was when I revised? Memory and the Importance of Review. How To Retain Information: Memory Improvent Strategies. 1. Pessimism We often forget because of pessimism about our ability to retain new information 2. Understanding It's easy to forget information we don't understand.

Now physicists have come up with a model of brain activity that seems to explain the reason behind the magical memory number. Search. Do You Read Fast Enough To Be Successful? Mapping the Modern Brain. March 2, 2004 Mapping the Modern Brain GW Clinical Professor Richard Restak Explores the Impact of Technology on Brain Function By Rachel Muir The quest to unlock the mysteries of the human brain is not a new one. But for much of human history, people’s struggle to comprehend the workings of the mind has been hampered by the crude and perilous nature of brain exploration.

That is until now. It’s a change that’s nothing short of “revolutionary,” opening up a host of possibilities that were the stuff of science fiction 20 years ago, according to Richard Restak, MD, a clinical professor of neurology at the GW Medical Center and author of the recently published “The New Brain: How the Modern Age Is Rewiring Your Mind.” Progress in Brain Research - (Vol 195) - 9780444538604.

Their skulls are more rounded and their brow ridges generally protrude much less. Replacement Model Arguments There are two sources of evidence supporting the replacement model--the fossil record and DNA. Homo sapiens began migrating into the lower latitudes of East Asia by at least 70,000 years ago. Evolution of the brain and intelligence in pr... [Prog Brain Res. 2012. Design principles of the human brain: an evol... [Prog Brain Res. 2012. Storage and executive processes in the frontal lobes. [Science. 1999. Communication in neuronal networks. [Science. 2003.