Open-Access Group Sanctions Three Publishers After Science 'Sting' A leading trade association for the publishers of free, open-access (OA) scientific journals has expelled two of its members, and put a third on probation, as a result of a controversial investigative journalism project published earlier this year by Science. 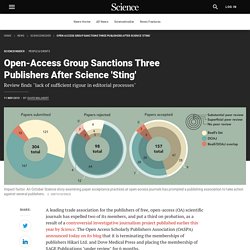 The Open Access Scholarly Publishers Association (OASPA) announced today on its blog that it is terminating the memberships of publishers Hikari Ltd. and Dove Medical Press and placing the membership of SAGE Publications “under review” for 6 months. Last month, reporter John Bohannon sparked extensive debate with a story, part of a larger special issue on how scientists communicate with each other, which documented lax standards for accepting manuscripts at a number of OA journals.

He found that dozens of free journals accepted a fake and obviously flawed study that he had created. A Hikari employee reached by ScienceInsider declined comment on the announcement. Dove did not respond to requests for comment. I've tracked all my son's first words since birth. Philippe Pinel - Moral Development, Mental, and Medical - JRank Articles. 1745-1826French physician and one of the founders of psychiatry. 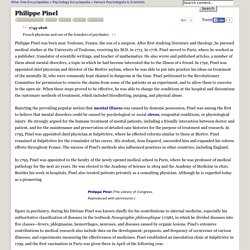 Philippe Pinel was born near Toulouse, France, the son of a surgeon. After first studying literature and theology, he pursued medical studies at the University of Toulouse, receiving his M.D. in 1773. In 1778, Pinel moved to Paris, where he worked as a publisher, translator of scientific writings, and teacher of mathematics.

A Brief History of Schizophrenia. The Strange Victorian Computer That Generated Latin Verse. Looking inside the Eureka machine. 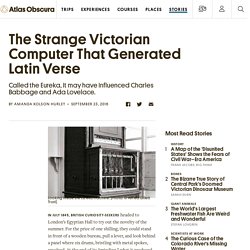 (Photo: © Alfred Gillett Trust) In July 1845, British curiosity-seekers headed to London’s Egyptian Hall to try out the novelty of the summer. For the price of one shilling, they could stand in front of a wooden bureau, pull a lever, and look behind a panel where six drums, bristling with metal spokes, revolved. Size Matters: The Hidden Mathematics of Life : Krulwich Wonders... 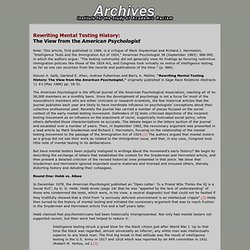 Herrnstein, "Intelligence Tests and the Immigration Act of 1924," American Psychologist 38 (September 1983): 986-995, in which the authors argue: "The testing community did not generally view its findings as favoring restrictive immigration policies like those of the 1924 Act, and Congress took virtually no notice of intelligence testing, as far as one can ascertain from the records and publications of the time.

" (p. 986). Steven A. A Review of B. F. Skinner's Verbal Behavior. Preface Rereading this review after eight years, I find little of substance that I would change if I were to write it today. 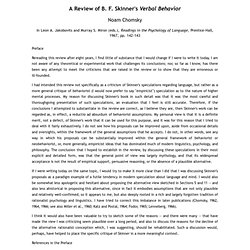 I am not aware of any theoretical or experimental work that challenges its conclusions; nor, so far as I know, has there been any attempt to meet the criticisms that are raised in the review or to show that they are erroneous or ill-founded.

Today's rich families in Florence, Italy, were rich 700 years ago. A lot has changed in the Italian city of Florence in the roughly 700 years since the 1427 census, but a striking new paper from Guglielmo Barone and Sauro Mocetti shows that one thing has changed less than you might think — the genealogical composition of who is rich and who is not. 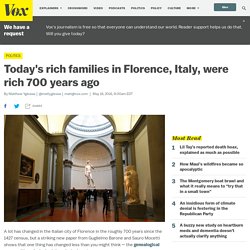 The Cure For Fear. Klaver found it difficult to talk about her anxiety, even with her husband. 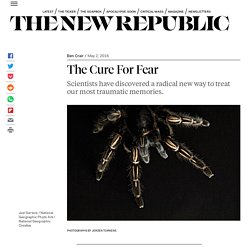 Thinking back to the robbery left her feeling even more isolated and vulnerable. “The first seconds, you feel so very, very lonely,” she said. She resisted the idea of psychotherapy, with its long sessions devoted to reliving and processing the trauma. A year and a half later, in 2013, Klaver read an item in the newspaper about Merel Kindt, a professor of clinical psychology at the University of Amsterdam. Kindt had developed a revolutionary treatment that could “neutralize” fear memories with a single pill. A team of psychologists have published a list of the 50 most incorrectly used terms in psychology (by both laymen and psychologists) in the journal Frontiers in Psychology. This free access paper explains many misunderstandings in modern psychology. : Eve. Untitled. Transforming Diagnosis. In a few weeks, the American Psychiatric Association will release its new edition of the Diagnostic and Statistical Manual of Mental Disorders (DSM-5). 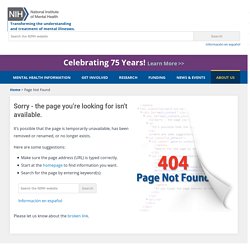 This volume will tweak several current diagnostic categories, from autism spectrum disorders to mood disorders. While many of these changes have been contentious, the final product involves mostly modest alterations of the previous edition, based on new insights emerging from research since 1990 when DSM-IV was published. Sometimes this research recommended new categories (e.g., mood dysregulation disorder) or that previous categories could be dropped (e.g., Asperger’s syndrome).1. Yvonne Brill and the Beef-Stroganoff Illusion. The most grating phrase in the opening paragraph of the Times’s obituary of Yvonne Brill, a rocket scientist whose inventions satellites still depend on, is not the one the newspaper changed after a burst of outrage—the one about beef Stroganoff. 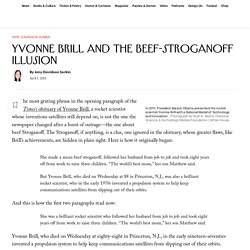 The Stroganoff, if anything, is a clue, one ignored in the obituary, whose greater flaws, like Brill’s achievements, are hidden in plain sight. Here is how it originally began: She made a mean beef stroganoff, followed her husband from job to job and took eight years off from work to raise three children. “The world’s best mom,” her son Matthew said. But Yvonne Brill, who died on Wednesday at 88 in Princeton, N.J., was also a brilliant rocket scientist, who in the early 1970s invented a propulsion system to help keep communications satellites from slipping out of their orbits. And this is how the first two paragraphs read now: From Homer To J.K. Rowling: The World's Greatest Storytellers, Visualized. "Storytelling" has become a buzzword in boardrooms of late—the term has come to refer to a branding strategy as companies seek to use compelling narratives to captivate consumers. 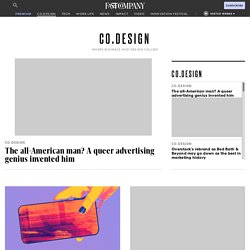 But before it became an overused bit of business jargon, storytelling was the job of authors, poets, playwrights, and not brands. History’s greatest storytellers are visualized in this timeline infographic by culture site Raconteur, which based on its survey of nearly 500 authors, journalists, students, and media professionals. Respondents' votes for world’s greatest storyteller span from the bards and messiahs of ancient times (Homer, Rumi, Jesus) to present-day bestselling authors (J.K. Rowling, Haruki Murakami, Steig Larson). A Dangerous Man: Lewis Terman and George Stoddard their Debates. StagesCenter. The Enduring Influence of Jean Piaget.

The Psychology Today interview with Jean Piaget took place in 1970 at the height of his influence. During that year, the international Jean Piaget Society was formed, and the society, as well as Piaget’s influence, endure. The interview captured many facets of Piaget’s remarkable career: his roots in epistemology and natural history; his interests in the underlying processes of intelligence and reasoning, the development of morality, and the theoretical basis within developmental psychology for educational practices; and his comparisons between his theory and other major theoretical positions of the day.

This commentary considers some of these aspects in the context of Piaget’s legacy for contemporary psychology. Piaget claimed in the interview that all the problems he had undertaken had been epistemological. Measurements of the Accuracy of Recollection. The Truth About Lie Detectors (aka Polygraph Tests) Lie detector tests have become a popular cultural icon — from crime dramas to comedies to advertisements — the picture of a polygraph pen wildly gyrating on a moving chart is readily recognized symbol. But, as psychologist Leonard Saxe, PhD, (1991) has argued, the idea that we can detect a person's veracity by monitoring psychophysiological changes is more myth than reality.

Even the term "lie detector," used to refer to polygraph testing, is a misnomer. Cattell james m. Treatment for the 'untreatable' Up to 30 percent of people who require mental health services have at least one personality disorder (PD)--characterized by abnormal and maladaptive inner experience and behavior. Personality disorders, also known as Axis II disorders, include obsessive-compulsive PD, avoidant PD, paranoid PD and borderline PD. Axis I disorders, on the other hand, include depression and schizophrenia--mental illnesses thought to be less pervasive but more acute.

While people with PDs can possess very different personality disturbances, they have at least one thing in common: chances are their mental illness will not remit without professional intervention. However, exactly what that intervention should consist of remains a subject for debate. Leichsenring Psychodyn%20%26%20CBT%20for%20PD. Freud is Dead. If the 20th century was "The American Century", it was also the century of Sigmund Freud (Roth, 1998). With books like The Interpretation of Dreams (1900), The Psychopathology of Everyday Life (1901), and the Introductory Lectures on Psycho-Analysis (1915-1916), works which achieved high levels of popular success, Freud changed our image of ourselves.

Whereas Copernicus showed that the Earth did not lie at the center of the universe, and Darwin showed that humans were descended from "lower" animals, Freud claimed to show that human experience, thought, and action was determined not by our conscious rationality, but by irrational forces outside our conscious awareness and control -- forces when could only be understood, and controlled, by an extensive therapeutic process he called psychoanalysis. Freud also changed the vocabulary with which we understand ourselves and others. Crews, F.C. (Ed.). (1998). Kihlstrom, J.F. (1994). Five Fallacies of Grief: Debunking Psychological Stages. Denial, anger, bargaining, depression, acceptance. So annealed into pop culture are the five stages of grief—introduced in the 1960s by Swiss-born psychiatrist Elisabeth Kübler-Ross based on her studies of the emotional state of dying patients—that they are regularly referenced without explication.

There appears to be no evidence, however, that most people most of the time go through most of the stages in this or any other order. According to Russell P. Focus PerlmanEng. An Open Letter from Isaac Newton to the Field of Psychology. Newton 4. PsychologyintheAgeofNewton. Teo a0031587. The Lost Millennium: Psychology During the Middle Ages. Bigfive_John.pdf. How to correct a horse who is disrespectful, food protective or ear pinning - Rick Gore Horsemanship.

Diogenes the Cynic. Sunday's program is about Diogenes the Cynic. Default. Jones-thissen-2007.pdf. Classics in Psychology. Evolution myths: 'Survival of the fittest' justifies 'everyone for themselves' - New Scientist. Fechner. Portraits of European Neuroscientists. Marie Jean Pierre Flourens (1794–1867): an extraordinary scientist of his time. History of Phrenology on the Web. What was phrenology? FJ Gall. Franz Joseph Gall (1758-1828) the originator of what later became phrenology. Phrenology. Homepage of the Department of Psychology at the University of Leipzig. Must Watch Psychology Videos. A Top 10 List of Psychology’s Big Questions, and the Answers. Introduction to Psychology. Psychology & The Human Mind. What Science Tells Us about Beating Addiction Aspen Ideas Festival PBS. Basic Definitions. History of Psychology. Antecedent Influences Towards American Functionalism Functionalism- How the mind is used by an organism for survival.