The Freud Museum ~ Education ~ Freud and Religion. "The whole thing is so patently infantile, so foreign to reality, that to anyone with a friendly attitude to humanity it is painful to think that the majority of mortals will never be able to rise above this view of life" Civilization and its Discontents 1930 "My deep engrossment in the Bible story (almost as soon as I had learnt the art of reading) had, as I recognised much later, an enduring effect upon the direction of my interest... 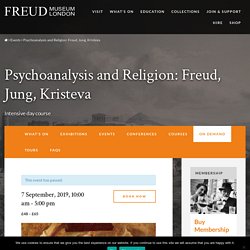 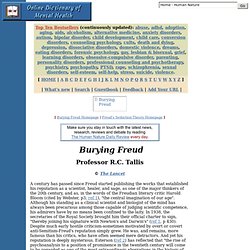 Tallis © The Lancet A century has passed since Freud started publishing the works that established his reputation as a scientist, healer, and sage, as one of the major thinkers of the 20th century, and as, in the words of the Freudian literary critic Harold Bloom (cited by Webster, p3, ref 1), "the central imagination of our age". "Opinion is gaining ground that doctrinaire psychoanalytic theory is the most stupendous intellectual confidence trick of the twentieth century: and a terminal product as well - something akin to a dinosaur or a zeppelin in the history of ideas, a vast structure of radically unsound design and with no posterity.

" "At most they have delayed the inevitable process by which he will settle into his rightful place in intellectual history as a thinker of the first magnitude. Evidently, anyone who would dispose of Freud once and for all faces a rather special challenge. References. Freud, Fraud and the Delusion of Experience. Part 2. 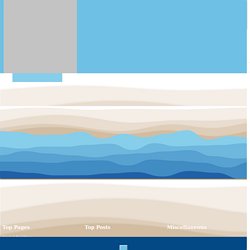 Part 2 “Fools say they learn by experience. Why Even Bother with Freud? My reason for discussing Freud’s influence in the medical sphere is that he demonstrated how easy it is to do bad science and also to pull the wool over the eyes of those not well-versed in the scientific method (which still includes more doctors than one might wish). As Karr said: “Plus ça change, plus c'est la même chose” (the more things change, the more they are the same). History reminds us of other similar and popular pseudo-scientific ideas that are worth recalling. SSRIs: Much More Than You Wanted To Know. Miri – the person, not the organization – writes about depression. 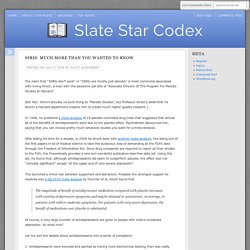 There’s a lot there worth thinking about, but one part caught my eye: I’m a little tired of being told that SSRIs “don’t work” when they’re part of the reason I didn’t try to off myself four years ago. There is compelling evidence to suggest they do not actually work and there is compelling evidence to suggest that they do actually work, so I’m comfortable saying that the jury’s still out on this one. I think the jury is less out now than it was a couple of years ago. I think there’s at least kind of a consensus on the data, mixed with a lot of debate over how to express a very complicated reality to the public in a concise way. And I am going to bypass that debate by just braindumping eight thousand words worth of very complicated reality on you. In 1998, he published a meta-analysis of 19 placebo-controlled drug trials that suggested that almost all of the benefits of antidepressants were due to the placebo effect. 1. 1. 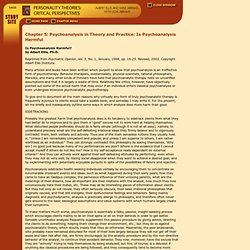 By Albert Ellis, Ph.D. Reprinted from Psychiatric Opinion, Vol. 5, No. 1, January, 1968, pp. 16-25. Revised, 2002. Copyright Albert Ellis Institute. Many articles and books have been written which purport to show that psychoanalysis is an ineffective form of psychotherapy. To give and to document all the main reasons why virtually any form of truly psychoanalytic therapy is frequently injurious to clients would take a sizable book; and someday I may write it. Probably the greatest harm that psychoanalysis does is its tendency to sidetrack clients from what they had better do to improve and to give them a “good” excuse not to work hard at helping themselves.

To make matters much worse, psychoanalysis is essentially a talky, passive, insight-seeking process which encourages clients mainly to lie on their spine or sit on their behinds in order to get better. The effectiveness of long-term psychoana... [Harv Rev Psychiatry. 2009] Psychoanalysis today. Studies of the Effectiveness of Psychoanalytic Psychotherapy. Evidence-Based Psychodynamic Psychotherapies Peter Fonagy, PhD[1] This piece essays to cover the same ground as the preceding chapter by Westen and his collaborators, but with an even larger reference list that more comprehensively covers the wider psychotherapy research world outside the United States, with Fonagy’s own arena of work centrally in the United Kingdom. 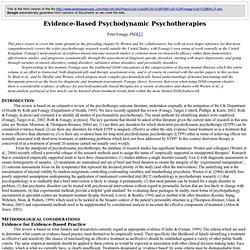 Fonagy’s meta-analysis of evidence-based outcome research studies is centered more on (research) efficacy rather than (naturalistic) effectiveness studies, and progresses systematically through the assessment of diagnosis-specific disorders, starting with major depressions, and going through varieties of anxiety disorders, eating disorders, substance abuse disorders, and personality disorders.