Biology of Classical and Operant Conditioning

The Neurophysiological Aspects of Pavlov's Theory of Higher Nervous Activity: In Honor of the 150th Anniversary of Pavlov's Birth - PubMed. Cocaine Conditioning Induces Persisting Changes in Ventral Hippocampus Synaptic Transmission, Long-Term Potentiation, and Radial Arm Maze Performance in the Mouse - PubMed. The effects of drugs of abuse, such as cocaine, on learning and memory processes are thought to contribute to drug craving and relapse susceptibility. 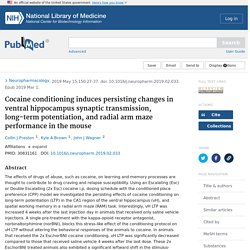 Using an Escalating (Esc) or Double Escalating (2x Esc) cocaine i.p. dosing schedule with the conditioned place preference (CPP) model we investigated the persisting effects of cocaine conditioning on long-term potentiation (LTP) in the CA1 region of the ventral hippocampus (vH), and spatial working memory in a radial arm maze (RAM) task. Interestingly, vH LTP was increased 4 weeks after the last injection day in animals that received only saline vehicle injections. A single pre-treatment with the kappa-opioid receptor antagonist, norbinaltorphimine (norBNI), blocks this stress-like effect of the conditioning protocol on vH LTP without altering the behavioral responses of the animals to cocaine. 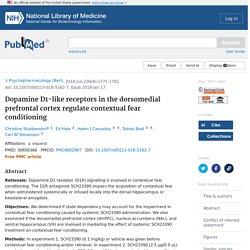 Operant Conditioning as a New Mechanism of Placebo Effects - PubMed. Background and objective: Placebo effects are considered to be learning phenomena. 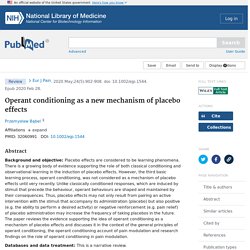 There is a growing body of evidence supporting the role of both classical conditioning and observational learning in the induction of placebo effects. However, the third basic learning process, operant conditioning, was not considered as a mechanism of placebo effects until very recently. Unlike classically conditioned responses, which are induced by stimuli that precede the behaviour, operant behaviours are shaped and maintained by their consequences. Thus, placebo effects may not only result from pairing an active intervention with the stimuli that accompany its administration (placebo) but also positive (e.g. the ability to perform a desired activity) or negative reinforcement (e.g. pain relief) of placebo administration may increase the frequency of taking placebos in the future.

Operant Conditioning Prevents Cell Death in the Adult Rat Dentate Gyrus - PubMed. Thousands of new neurons are produced each day in the dentate gyrus of the adult mammalian hippocampus. 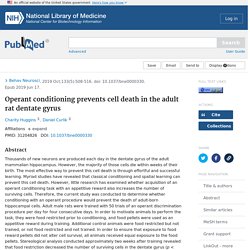 However, the majority of those cells die within weeks of their birth. The most effective way to prevent this cell death is through effortful and successful learning. Myriad studies have revealed that classical conditioning and spatial learning can prevent this cell death. However, little research has examined whether acquisition of an operant conditioning task with an appetitive reward also increases the number of surviving cells. Therefore, the current study was conducted to determine whether conditioning with an operant procedure would prevent the death of adult-born hippocampal cells. Indirect Medium Spiny Neurons in the Dorsomedial Striatum Regulate Ethanol-Containing Conditioned Reward Seeking - PubMed. INFORMATION: THEORY, BRAIN, AND BEHAVIOR. Information: Theory, Brain, and Behavior - PubMed. In the 65 years since its formal specification, information theory has become an established statistical paradigm, providing powerful tools for quantifying probabilistic relationships. 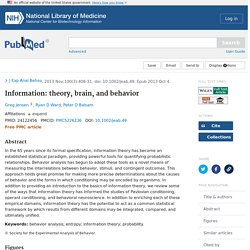 Behavior analysis has begun to adopt these tools as a novel means of measuring the interrelations between behavior, stimuli, and contingent outcomes. This approach holds great promise for making more precise determinations about the causes of behavior and the forms in which conditioning may be encoded by organisms. In addition to providing an introduction to the basics of information theory, we review some of the ways that information theory has informed the studies of Pavlovian conditioning, operant conditioning, and behavioral neuroscience. In addition to enriching each of these empirical domains, information theory has the potential to act as a common statistical framework by which results from different domains may be integrated, compared, and ultimately unified. 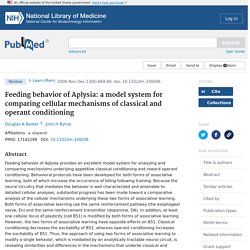 However, the two forms of associative learning have opposite effects on B51. Commentary: Behavior analysis and behavioral neuroscience. Behavior analysis and behavioral neuroscience. Classical conditioning - Latest research and news. Different brain networks mediate the effects of social and conditioned expectations on pain. - PubMed - NCBI. The role of the cerebellum in classical conditioning of discrete behavioral responses. - PubMed - NCBI.