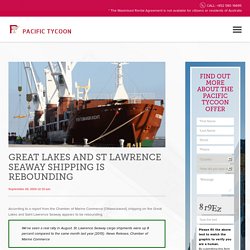 We've seen a real rally in August. St. Lawrence Seaway cargo shipments were up 8 percent compared to the same month last year [2015].- News Release, Chamber of Marine Commerce Since 2014, the first full year following major investment in container cargo, tonnage moving through the port of Cleveland has quadrupled. During the regular shipping season cargo goes directly from the port of Cleveland, the only container port on the Great Lakes, to the port of Antwerp in Belgium.

Economists Believe America Needs Infrastructure Investment. September 27, 2016 12:05 am Published by Pacific Tycoon Infrastructure spending, unlike many other forms of government outlays, holds the power to give the economy a sustained lift for decades down the line. 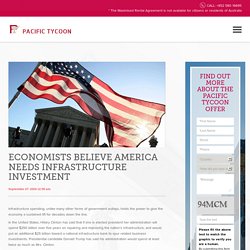 In the United States, Hillary Clinton has said that if she is elected president her administration will spend $250 billion over five years on repairing and improving the nation’s infrastructure, and would put an additional $25 billion toward a national infrastructure bank to spur related business investments.

Asian Countries Performing Well Despite Economic Challenges. Moore Stephens Confidence Shipping Industry Improved. Cosco Shipping Investing 738 Million Dollars Khalifa Port. Maersk Line Has A Plan To End A Decade Of Revenue Stagnation. September 29, 2016 12:10 am Published by Pacific Tycoon Following the split of Maersk's Shipping and Energy divisions into to separate entities, the company has said that it will boost revenues by expanding into transport and logistics businesses; in particular, areas "adjacent" to its core operations in container shipping, port terminals, and freight forwarding. 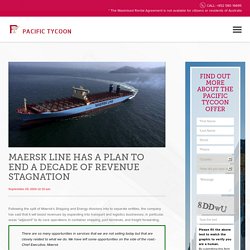 There are so many opportunities in services that we are not selling today but that are closely related to what we do. We have left some opportunities on the side of the road.- Chief Executive, Maersk According to company officials, Maersk Line and APM Terminals need to implement a strategy that will end a decade of revenue stagnation and aim for strong, sustainable growth.

South Korean Court Considers Sale of Hanjin Shipping Co. September 30, 2016 12:05 am Published by Pacific Tycoon A month after Hanjin Shipping filed for receivership, the South Korean court overseeing the company’s proceeding is considering a sale of the entire container line. 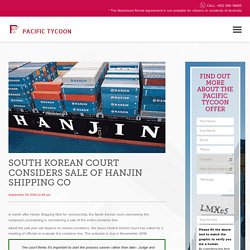 Albeit the sale plan will depend on market conditions, the Seoul Central District Court has called for a meeting of officials to evaluate the container line. The outcome is due in Novemeber 2016. Economists Believe America Needs Infrastructure Investment. Great Lakes And St Lawrence Seaway Shipping Is Rebounding. New 100k Teu Vishakhapatnam Container Freight Station Opened. August 23, 2016 12:05 am Published by Pacific Tycoon Developed by Visakha Container Terminal (VCTPL) with an investment of INR1 billion ($15 million), a new container freight station with a 100,000 twenty foot equivalent unit (TEU) capacity has been opened at the Vishakhapatnam port in India. 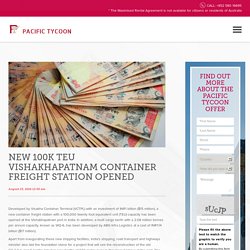 In addition, a multi cargo berth with a 2.08 million tonnes per annum capacity, known as WQ-6, has been developed by ABG Infra Logistics at a cost of INR1.14 billion ($17 million). Apart from inaugurating these new shipping facilities, India’s shipping, road transport and highways minister also laid the foundation stone for a project that will see the reconstruction of the old EQ-2,3,4, and 5 berths into two new berths of 530 meter quay in the inner harbour at the port. The project, with a six million tonnes of capacity, will require an investment of INR1.82 billion ($27 million). 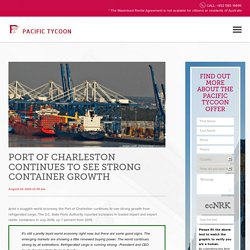 The S.C. State Ports Authority reported increases in loaded import and export reefer containers in July 2016, up 7 percent from 2015. It’s still a pretty tepid world economy right now, but there are some good signs. The emerging markets are showing a little renewed buying power. The fiscal year 2017 began in July 2016 with a record for pier container volumes, which account for the number of boxes that move through the port, regardless of their size.

Container Traffic at The Port of Tauranga Rose 12.1 Percent

Singapore Government Establishing Office in Kenya Africa. DP World Expanding Its Intermodal Reach Within Asia Economy. China Asks Australia To Join In Fight Against Protectionism. MSC Baptizes MSC Sveva During Visit at The Port of Le Havre. July 25, 2016 12:05 am Published by Pacific Tycoon On July 20th, 2016, the Mediterranean Shipping Company (MSC) celebrated the baptism of the MSC Sveva during the ship's call at the Port of Le Havre. 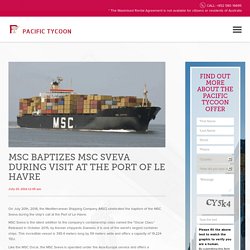 MSC Sveva is the latest addition to the company's containership class named the "Oscar Class. " Released in October 2015, by Korean shipyards Daewoo, it is one of the world's largest container ships. This incredible vessel is 395.4 meters long by 59 meters wide and offers a capacity of 19,224 TEU. Like the MSC Oscar, the MSC Sveva is operated under the Asia-Europe service and offers a competitive transit time of 24 days between Yantian and Le Havre, and 28 days to Shanghai.

Tampa Port Hopes New Cranes Will Attract Shipping Companies. July 27, 2016 12:05 am Published by Pacific Tycoon Ports America has been pitching container lines on the idea of adding Tampa as an east Gulf call on Panama Canal services calling Houston, which handles two-thirds of the Gulf of Mexico’s container traffic, and as a gateway for north-south traffic. 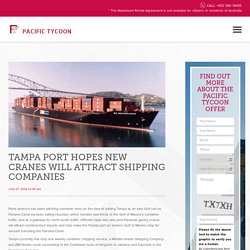 Officials hope two new post-Panamax gantry cranes will attract containerized imports and help make the Florida port an eastern Gulf of Mexico stop for vessels transiting the Panama Canal. Tampa currently has only one weekly container shipping service, a Mediterranean Shipping Company and ZIM feeder route connecting to the Caribbean hubs of Kingston in Jamaica, and Caucedo in the Dominican Republic. In addition to the new cranes, which now span 20 rows of containers and represent a $24 million investment, the port has a new intermodal railyard served by CSX Transportation, and officials have plans to open a cold-storage warehouse near the port in 2017. India Has Been Playing Second-fiddle to China; That's Changing. July 26, 2016 12:10 am Published by Pacific Tycoon Economically speaking, in the past India, as part of Chindia, has "played second-fiddle" to China. 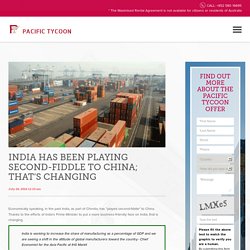 Thanks to the efforts of India's Prime Minister to put a more business-friendly face on India, that is changing. India is working to increase the share of manufacturing as a percentage of GDP and we are seeing a shift in the attitude of global manufacturers toward the country.- Chief Economist for the Asia Pacific at IHS Markit India wants to be a bigger producer. At the moment, the manufacturing sector accounts for just 15 percent of India's GDP. Although Indian officials have succeeded in attracting giant manufacturers like Foxconn and Apple, India has not delivered on the domestic production that analysts expected. 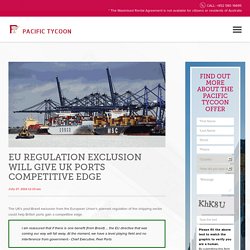 I am reassured that if there is one benefit (from Brexit) … the EU directive that was coming our way will fall away. At the moment, we have a level playing field and no interference from government.- Chief Executive, Peel Ports.

CMA CGM Adds Montego Bay Port to Caribbean Feeder Service. July 29, 2016 12:05 am Published by Pacific Tycoon Further demonstrating the company’s strong commitment to Jamaica, CMA CGM has announced that the port of Montego Bay has been added as an additional call on its Caribbean Feeder Service. Using a dedicated vessel, CMA CGM will offer a new and direct service from across the world directly to the port of Montego Bay.

Pentalver Makes an Important Investment in Its Reefer Fleet. Cosco Accuses Greece of Altering Terms of Pireaus Port Deal. Iraq Will Invite Foreign Investors to Invest in Faw Port. JNPT Investing Rs 500 Crore Into Coastal Shipping, Rail Yard. India Ministry of Shipping Seeks Funding For Deep-Sea Ports. ABP Makes £15 Million Investment at Hull Container Terminal. May 19, 2016 12:05 am Published by Pacific Tycoon Associated British Ports (ABP) has invested £15 million into state-of-the-art equipment at the Hull Container Terminal. The £15 million investment includes two new Liebherr gantry cranes, as well as a fleet of 21 reach stackers, tractors and trailers. The opportunity arose for ABP to run the terminal when our agreement with PD Ports came to an end. We already run a very successful container operation in Immingham, so it made sense for us to look to operate the Hull terminal too.- ABP Director Humber Since taking over operations, the port operator has invested in new infrastructure and equipment which allows it to accommodate more than 9,000 shipping containers per month and host vessels from Rotterdam, Tilbury and Grangemouth.

The transition has been a smooth one and many of the terminal’s existing employees are now part of the ABP workforce.

Korean Port Industrial Complexes Are Attracting Investment. May 23, 2016 12:05 am Published by Pacific Tycoon For more than a decade, Korea has built industrial complexes in areas surrounding its five major ports: Busan, Incheon, Gwangyang, Pyeongtaek-Dangjin and Ulsan. The country's goal is to turn the ports into leading logistics hubs by attracting not only shipping companies, but also manufacturing and services firms. South Carolina Port Invest In Second Inland Port. April 25, 2016 12:10 am Published by Pacific Tycoon The South Carolina Ports Authority (SCPA) has announced it plans to open a second inland port in Dillon's Tri-County Gateway Industrial Park.

A development study is underway and if all goes well, the new $30 million to $35 million inland port could be operational in early 2018. We started thinking about I’d say last summer. We’ve had a lot of success in (the inland port in) Greer and we try to find ways to selectively improve inter-modal infrastructure in the state and this came up on our radar screen … We have to have a revenue base to justify the investment. Delaware River Deepening - More Ships and More Commerce. May 3, 2016 12:10 am Published by Pacific Tycoon Port officials say a deeper Delaware River channel should put more cargo on ships coming into the ports and allow larger ships to sail the river after the Panama Canal expansion is completed this year.

In addition to accommodating the arrival of bigger vessels, deepening the channel to 45 feet would generate more than $1 billion in port infrastructure investment projects, and would certainly help the port remain competitive. With deeper water, Philadelphia could be a ship's first port of call, instead of second or later. Completing this project will mean more ships, more cargo, more commerce, and more jobs.- Chairman, Philadelphia Regional Port Authority (PRPA) Given that the largest U.S. ports already have deep water, deepening the channel from 40 feet to 45 feet will put ports on the Delaware in line with other major East Coast ports. In 2015, cargo volumes grew at the Philadelphia port for the sixth consecutive year. Abu Dhabi Ports reach double digit growth in two areas. China and the Port of Singapore - Pacific Tycoon. See the blog, how Grangemouth Port Invests £2 Million in 50000 Sq Ft Warehouse.

Oman Shipping Company (OSC) Launch New Shipping Service. April 15, 2016 12:05 am Published by Pacific Tycoon The Oman Shipping Company (OSC) has announced that the company will launch a new freight service that will link the Omani ports of Salalah, Duqm and Sohar, with the UAE. Port of Miami Container Traffic Rose increased by percent 20. Allcargo Announces Plan For New Logistics Park at Jhajjar.

Port of Miami Container Traffic by 20% in January 2016. European Container Line Reopens Regular Service to Europe. March 17, 2016 12:05 am Published by Pacific Tycoon IRISL announced that it is reopening its regular liner service between Northern Europe and ports in the Persian Gulf. The European Container Line (ECL) will operate with 2,500-TEU container ships, which will call at the ports of Hamburg and Antwerp, as well as Genoa, Istanbul, Port Said, and Bandar Abbas.