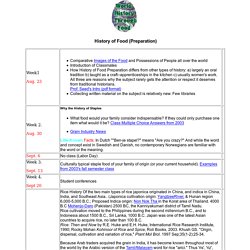 (Japonica cultivation origin: YangtzeeRiver, & Hunan region 6,000-5,000 B.C.; Proposed Indica origin: Non Nok Tha in the Korat area of Thailand. 4000 B.C Mohenjo-Daro (Pakistan) 2500 BC, the Kanniyakumari district of Tamil Nadu. Rice cultivation moved to the Philippines during the second millennium B.C., and to Indonesia about 1500 B.C., Sri Lanka, 1000 B.C. Japan was one of the latest Asian countries to acquire rice, no later than 100 B.C. Rice: Then and Now by R.E. Huke and E.H. Because Arab traders acquired the grain in India, it has become known throughout most of the world by the Arabic version of the Tamil/Malayam word for rice "arici. " Tambo is rice field and Kome is rice in Japanese; " ek dhan" means "a grain of rice" in Hindi; so what is it in Korean?

Do Honda and Toyota mean rice field? Current regions and species cultivated. The Rice Genome. 7 Foods That Have Led to War. As authors Neil Gaiman and Terry Pratchett mused in Good Omens, "civilization is 24 hours and two meals away from barbarism.” 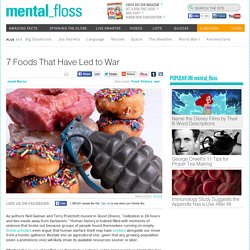 Human history is indeed filled with moments of violence that broke out because groups of people found themselves running on empty. Some scholars even argue that human warfare itself may have evolved alongside our move from a hunter-gatherer lifestyle into an agricultural one, given that any growing population (even a prehistoric one) will likely strain its available resources sooner or later. Whether the cause of conflict was threats to a nation’s entire grain supply or simply the loss of a lone pig, these foods all ended up in the same place throughout history: smack in the middle of war. Prior to the Pastry War, a.k.a. the First Franco-Mexican War, tensions were high in the new Mexican republic as competing leadership factions, European nationals, and just about everybody else struggled for a better place in the new order. 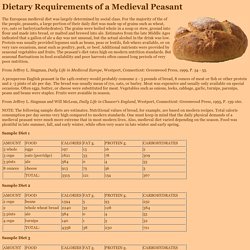 For the majority of the of the people, peasants, a large portion of their daily diet was made up of grains such as wheat, rye, oats or barley(carbohydrates). The grains were boiled whole in a soup or stew, ground into flour and made into bread, or malted and brewed into ale. Estimates from the late Middle Ages indicated that a gallon of ale a day was not unusual, but the actual alcohol in the drink was low.

Protein was usually provided legumes such as beans, peas or lentils, fish where available, or on very rare occasions, meat such as poultry, pork, or beef. Additional nutrients were provided by seasonal vegetables and fruits. From Jeffrey L. A prosperous English peasant in the 14th century would probably consume 2 - 3 pounds of bread, 8 ounces of meat or fish or other protein and 2 -3 pints of ale per day. From Jeffrey L. NOTE: The following sample diets are estimates. Sample Diet 1 Sample Diet 2. Anthony Bourdain explains the Israel-Palestine conflict through food.

CNN food and travel host Anthony Bourdain's excellent hour-long special on Israel-Palestine, in he which he explores both sides of the green line, begins with a line that could not ring truer for me. 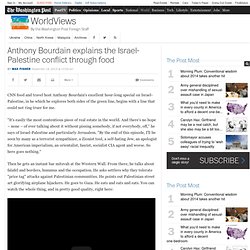 "It's easily the most contentious piece of real estate in the world. And there's no hope – none – of ever talking about it without pissing somebody, if not everybody, off," he says of Israel-Palestine and particularly Jerusalem. "By the end of this episode, I'll be seen by many as a terrorist sympathizer, a Zionist tool, a self-hating Jew, an apologist for American imperialism, an orientalist, fascist, socialist CIA agent and worse. So here goes nothing. " Then he gets an instant bar mitzvah at the Western Wall. It's not just Bourdain's tortured ambivalence about the politics, both geo- and identity, that makes his Jerusalem program so good. Food also humanizes. Maybe most helpful is the way that Bourdain foregrounds his own struggle to navigate it all.