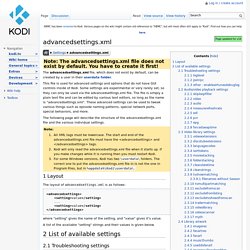 The following page will describe the structure of the advancedsettings.xml file and the various individual settings. Note: All XML tags must be lowercase. 1 Layout. Advancedsettings.xml. How to get Pulsar addon for XBMC / Kodi to work?! (With screenshots) - iWillFolo. Pulsar is XBMCtorrent addon’s successor, yet unlike the latter, Pulsar takes a little bit more tinkering in order for it to work. 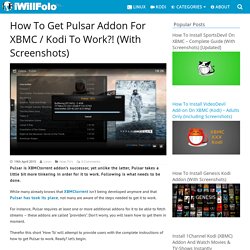 Following is what needs to be done. While many already knows that XBMCtorrent isn’t being developed anymore and that Pulsar has took its place, not many are aware of the steps needed to get it to work. For instance, Pulsar requires at least one or more additional addons for it to be able to fetch streams – these addons are called “providers”. Don’t worry, you will learn how to get them in moment. Therefor this short ‘How To’ will attempt to provide users with the complete instructions of how to get Pulsar to work. Requirements: Step #1 Once you have Pulsar installed, the first thing you should do is to get some “providers” that will provide Pulsar the links from which it’ll pull streams. To make things simple, we shall use a special repository (by iCanuckXBMCrepo) that gathers some of the most common providers under one roof. Download PulsarUnofficialRepo Step #2. XBMC keeps turning TV on randomly. HandBrake: Open Source Video Transcoder. 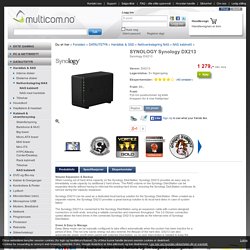 The Synology DX213 is connected to the Synology DiskStation using an expansion cable with custom-designed connectors on both ends, ensuring a reliable connection and maximum throughput. CuBox-i -Mini Computer, XBMC player, Android TV Box. Review: The Tiny Cubox Computer ← Terence Eden's BlogTerence Eden's Blog. It's not often that you get to play with a computer which is smaller than its own plug! 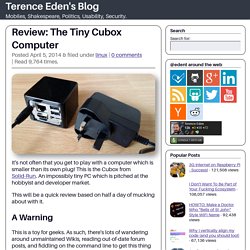 This is the Cubox from Solid-Run. An impossibly tiny PC which is pitched at the hobbyist and developer market. This will be a quick review based on half a day of mucking about with it. A Warning This is a toy for geeks. While the Cubox isn't aimed at exactly the same market at the Raspberry Pi - it has the same sort of DIY mentality. Cost Depending on the spec you want, the Cubox retails for £90 to £110. That's around 4 times the price of a Raspberry Pi. The Spec As you can see from the photo, the Cubox has 2 USB ports, an e-SATA for external hard drives, HDMI out for video / audio, and an Ethernet port. There's no hard drive - it boots off a MicroSD card (4GB minimum recommended).

Its power plug is interesting. You can buy 3rd party USB leads which will work with a suitable adapter, should you want to. CuBox-i4Pro. CuBoxTV - SolidRun.com. HFX classic. Best CPUs, Processors and APUs For Your Money! Updated on July 16th 2014 The logo for Intel’s Devil’s Canyon CPUs.The Best CPU For Your Money? 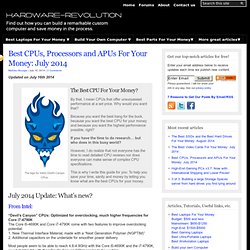 So, you are ready to build your first HTPC, but only the thing holding you back on the build is choosing the right processor. 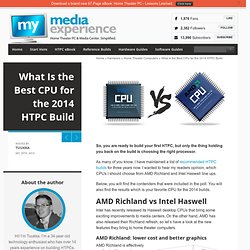 As many of you know, I have maintained a list of recommended HTPC builds for three years now. I wanted to hear my readers opinion, which CPUs I should choose from AMD Richland and Intel Haswell line ups. Below, you will find the contenders that were included in the poll. You will also find the results which is your favorite CPU for the 2014 builds. AMD Richland vs Intel Haswell Intel has recently released its Haswell desktop CPUs that bring some exciting improvements to media centers. AMD Richland: lower cost and better graphics AMD Richland is effectively a refresh of the previous generation Trinity platform, but with slightly higher clocks, so they should be somewhat improved performance-wise, however, this is nothing significant for HTPC use. AMD Richland has a very good integrated graphics chip which is even capable of running light 3D games. TEST: Asus Z97-A - Ytelse. Vi har i denne testen sammenliknet Asus Z97-A med produsentens verstingkort Asus Z97-Deluxe (NFC & WLC), Z87-modellene Asus Sabertooth Z87, ASRock Z87 OC Formula og Asus Z87-A for LGA1150. 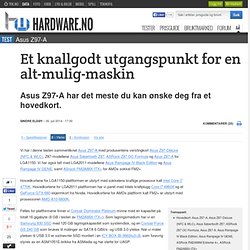