Society for American Baseball Research. Jackie Robinson is perhaps the most historically significant baseball player ever, ranking with Babe Ruth in terms of his impact on the national pastime. 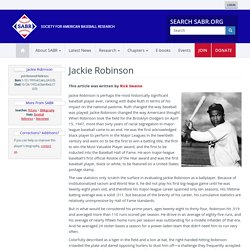 Ruth changed the way baseball was played; Jackie Robinson changed the way Americans thought. When Robinson took the field for the Brooklyn Dodgers on April 15, 1947, more than sixty years of racial segregation in major-league baseball came to an end. He was the first acknowledged black player to perform in the Major Leagues in the twentieth century and went on to be the first to win a batting title, the first to win the Most Valuable Player award, and the first to be inducted into the Baseball Hall of Fame. He won major-league baseball's first official Rookie of the Year award and was the first baseball player, black or white, to be featured on a United States postage stamp.

The raw statistics only scratch the surface in evaluating Jackie Robinson as a ballplayer. Second base was Robinson's best position. Sources Frommer, Harvey. Notes. Jackie Robinson - The Official Website. Jack Roosevelt Robinson was born in Cairo, Georgia in 1919 to a family of sharecroppers. 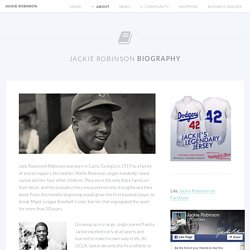 His mother, Mallie Robinson, single-handedly raised Jackie and her four other children. They were the only black family on their block, and the prejudice they encountered only strengthened their bond. From this humble beginning would grow the first baseball player to break Major League Baseball's color barrier that segregated the sport for more than 50 years. Growing up in a large, single-parent family, Jackie excelled early at all sports and learned to make his own way in life. At UCLA, Jackie became the first athlete to win varsity letters in four sports: baseball, basketball, football and track. Jackie Robinson Stats. Leagues historically made no effort to balance team, league, and player fielding stats. 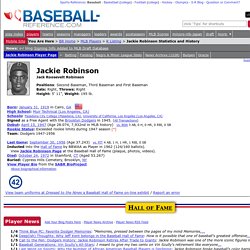 Since 1990 or so, computers have made this feasible, but prior to that there are hundreds or thousands of discrepancies each year in games played (even whether a player played a position), putouts, assists, double plays and errors. Pre-1930 SB & CS data for catchers is estimated from catcher assists, games started and opposition stolen bases.From 1930 on SB, CS, Pickoff, & WP data for catchers and pitchers is taken from play-by-play accounts in the retrosheet files.

Robinson, Jackie. “A life is not important except in the impact it has on other lives,” Jackie Robinson once said. 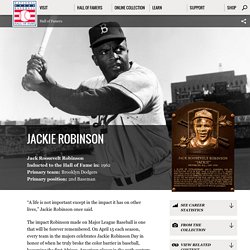 The impact Robinson made on Major League Baseball is one that will be forever remembered. On April 15 each season, every team in the majors celebrates Jackie Robinson Day in honor of when he truly broke the color barrier in baseball, becoming the first African-American player in the 20th century to take the field in the big leagues. He opened the door for many others and will forever be appreciated for his contribution to the game. Robinson stood up for equal rights even before he did so in baseball.

He was arrested and court-martialed during training in the Army for refusing to move to the back of a segregated bus. The second baseman played for the Kansas City Monarchs as a part of the Negro Leagues until Brooklyn Dodgers general manager Branch Rickey decided he wanted to integrate baseball. Access Newspaper Archive Institutional Version. Jackie Robinson - Biography - Baseball Player. Jackie Robinson broke the color barrier when he became the first black athlete to play Major League Baseball in the 20th century. 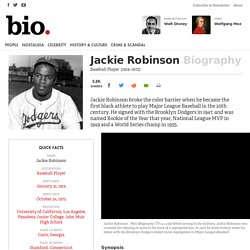