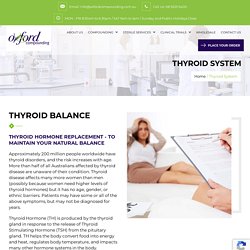 More than half of all Australians affected by thyroid disease are unaware of their condition. Thyroid disease affects many more women than men (possibly because women need higher levels of thyroid hormones) but it has no age, gender, or ethnic barriers. Patients may have some or all of the above symptoms, but may not be diagnosed for years. Thyroid Hormone (TH) is produced by the thyroid gland in response to the release of Thyroid Stimulating Hormone (TSH) from the pituitary gland. TH exists in two major forms: Thyroxine (T4), an inactive form that is produced exclusively by the thyroid gland. Clinical Trial Compounding - Oxford Compounding. Clinical Trial Medications and Specialized Preparations Oxford Compounding has experience in the preparation of medications for just that purpose. 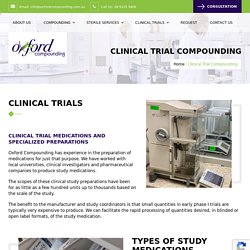 We have worked with local universities, clinical investigators and pharmaceutical companies to produce study medications. The scopes of these clinical study preparations have been for as little as a few hundred units up to thousands based on the scale of the study. The benefit to the manufacturer and study coordinators is that small quantities in early phase I trials are typically very expensive to produce. We can facilitate the rapid processing of quantities desired, in blinded or open label formats, of the study medication. 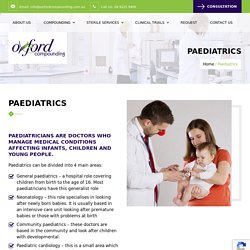 Paediatrics can be divided into 4 main areas: General paediatrics – a hospital role covering children from birth to the age of 16. Most paediatricians have this generalist roleNeonatology – this role specialises in looking after newly born babies. It is usually based in an intensive care unit looking after premature babies or those with problems at birthCommunity paediatrics – these doctors are based in the community and look after children with developmental.Paediatric cardiology – this is a small area which is a specialty in its own right. If your child has been prescribed certain medication and administering that medication is about as enjoyable as pulling teeth – for both parties – there’s no doubt you’re looking for better solutions.

There are several reasons why administration of medication to kids can be difficult: Compounding Pharmacy in WA. The History of the Pharmacy and Pharmacology dates back to medieval times with priests, ministering to the sick often along with religious rites. 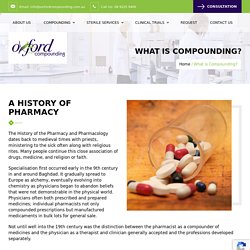 Many people continue this close association of drugs, medicine, and religion or faith. Specialisation first occurred early in the 9th century in and around Baghdad. It gradually spread to Europe as alchemy, eventually evolving into chemistry as physicians began to abandon beliefs that were not demonstrable in the physical world. Physicians often both prescribed and prepared medicines; individual pharmacists not only compounded prescriptions but manufactured medicaments in bulk lots for general sale. Not until well into the 19th century was the distinction between the pharmacist as a compounder of medicines and the physician as a therapist and clinician generally accepted and the professions developed separately. The origin of the word “pharmacy” is generally ascribed to the Greek pharmakon (“remedy”). Perth Compounding Pharmacy. Oxford Compounding Antony Accordino B Pharm, MPS, MBA is the Director of Oxford Compounding. 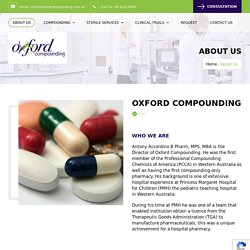 He was the first member of the Professional Compounding Chemists of America (PCCA) in Western Australia as well as having the first compounding-only pharmacy. His background is one of extensive hospital experience at Princess Margaret Hospital for Children (PMH) the pediatric teaching hospital in Western Australia. During his time at PMH he was one of a team that enabled institution obtain a licence from the Therapeutic Goods Administration (TGA) to manufacture pharmaceuticals, this was a unique achievement for a hospital pharmacy. WE DO Compounding FOR Our focus is providing the best possible treatments available to patients and health care providers who are looking for ways to optimise therapy.

Pain management is the medical specialty born out of the need for treating all types of pain, including musculoskeletal, spinal and neuropathic pain disorders.