Understanding Player Positions in Basketball. In basketball, a five-player team scores points by getting the ball through the hoop. 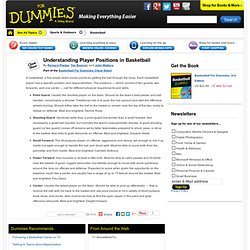 Each basketball player has a specific position and responsibilities. The positions — which consist of two guards, two forwards, and one center — call for different physical requirements and skills: Point Guard: Usually the shortest player on the team. Should be the team's best passer and ball handler; not primarily a shooter. Traditional role is to push the ball upcourt and start the offensive wheels turning. YouTube. Basketball positions. The three basketball positions normally employed by organized basketball teams are the guards, forwards, and the center. 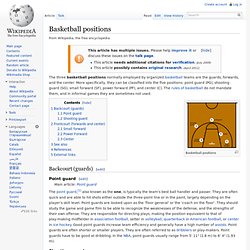 More specifically, they can be classified into the five positions: point guard (PG), shooting guard (SG), small forward (SF), power forward (PF), and center (C). The rules of basketball do not mandate them, and in informal games they are sometimes not used. Basketball positions Backcourt (guards)[edit] Point guard[edit] Shooting guard[edit] 7 Basketball Rules Myths. There are certain calls made in a basketball game that are accepted as reality, when it fact they aren't at all. 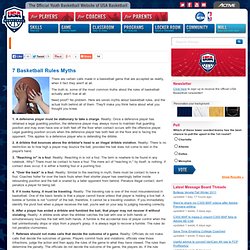 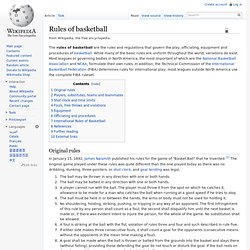 While many of the basic rules are uniform throughout the world, variations do exist. Most leagues or governing bodies in North America, the most important of which are the National Basketball Association and NCAA, formulate their own rules. In addition, the Technical Commission of the International Basketball Federation (FIBA) determines rules for international play; most leagues outside North America use the complete FIBA ruleset.

Original rules In January 15, 1892, James Naismith published his rules for the game of "Basket Ball" that he invented:[1] The original game played under these rules was quite different than the one played today as there was no dribbling, dunking, three-pointers, or shot clock, and goal tending was legal. Official Rules of the National Basketball Association. Basketball rules. Scoring and Court markings Originally only the number of goals was counted, and when free throws were introduced they were considered one goal each. 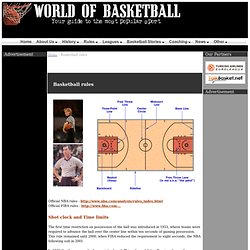 In 1896 this changed to two points for a field goal and one point for a free throw. Basketball Basics - The Rules, Concepts, Definitions, and Player Positions. Just for subscribing to our free newsletter you’ll get these 3 eBooks for free… 72 Basketball Drills & Coaching Tips – 136 page eBook. 21 Basketball Tips & Tricks for Players – 20 page eBook. 32 Winning Basketball Plays – 96 page eBook. 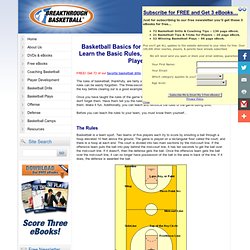 Plus you’ll get ALL updates to this website delivered to your inbox for free. Over 100,000 other coaches, players, & parents have already subscribed. We will never send you spam or share your email address, guaranteed! Close FREE! NBA Basketball Facts. Facts about BASKETBALL. Facts about Basketball. Quick Fact! 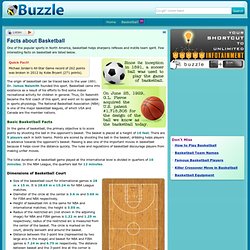 Michael Jordan's All-Star Game record of 262 points was broken in 2012 by Kobe Bryant (271 points).The origin of basketball can be traced back to the year 1891. founded this sport. Basketball came into existence as a result of his efforts to find some indoor recreational activity for children in general. Thus, Dr. Naismith became the first coach of this sport, and went on to specialize in sports physiology. 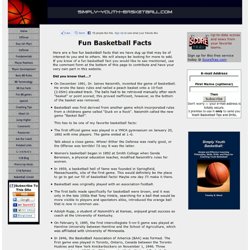 We will always be looking for more to add. If you know of a fun basketball fact you would like to see mentioned, use the comment form at the bottom of this page to contribute and have your very own part in this website. Basketball. History Creation In early December 1891, Canadian Dr. 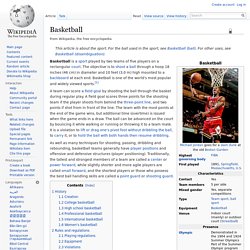 James Naismith,[2] a physical education professor and instructor at the International Young Men's Christian Association Training School[3] (YMCA) (today, Springfield College) in Springfield, Massachusetts was trying to keep his gym class active on a rainy day. He sought a vigorous indoor game to keep his students occupied and at proper levels of fitness during the long New England winters. After rejecting other ideas as either too rough or poorly suited to walled-in gymnasiums, he wrote the basic rules and nailed a peach basket onto a 10-foot (3.05 m) elevated track. NBA.com.

Basketball in America: A History. An American game that has traveled well is basketball, now played by more than 250 million people worldwide in an organized fashion, as well as by countless others in "pick-up" games. 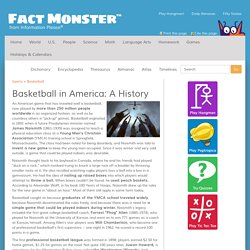 Basketball originated in 1891 when a future Presbyterian minister named James Naismith (1861-1939) was assigned to teach a physical education class at a Young Men's Christian Association (YMCA) training school in Springfield, Massachusetts. The class had been noted for being disorderly, and Naismith was told to invent a new game to keep the young men occupied. Since it was winter and very cold outside, a game that could be played indoors was desirable. Naismith thought back to his boyhood in Canada, where he and his friends had played "duck on a rock," which involved trying to knock a large rock off a boulder by throwing smaller rocks at it.

Throughout the 20th century, leagues developed such as the NCAA, the NBA and others. Today it is one of the most popular sports in the world. Early history[edit] Invention of the game[edit] The History of Basketball. From New York to London, to Paris, to Beijing. From Sarajevo to Dafar to Buenos Aires to Los Angels and everywhere in between the game of Basketball is played.

It’s played in the city parks of New York and the dusty plains of Africa, and the expensive designed courts of the NBA. History of Basketball. As of July 1, 2013 ThinkQuest has been discontinued. We would like to thank everyone for being a part of the ThinkQuest global community: Students - For your limitless creativity and innovation, which inspires us all. Teachers - For your passion in guiding students on their quest. Partners - For your unwavering support and evangelism. Parents - For supporting the use of technology not only as an instrument of learning, but as a means of creating knowledge. We encourage everyone to continue to “Think, Create and Collaborate,” unleashing the power of technology to teach, share, and inspire. Best wishes, The Oracle Education Foundation. NCAA - Men's College Basketball Teams, Scores, Stats, News, Standings, Rumors.