Banned books and gun violence. Gun violence. Buying a Gun Is So Easy 'It Doesn't Make Sense' President Barack Obama on Tuesday recommended several measures designed to keep guns out of the hands of potentially dangerous people who shouldn’t be allowed to own a deadly weapon. 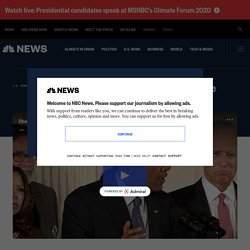 A main tenet of his plan involves requiring anyone who sells a gun to obtain a license, which would then mean they would have to perform background checks on any potential gun buyer. The measure is designed, in part, to keep guns from being sold without background checks at gun shows, privately and online, in what is often referred to as the “gun law loophole.” Obama announced that regulators would crack down on dealers who use these loopholes to avoid acquiring licenses, thereby skirting the requirement to perform background checks. “We’ve created a system in which dangerous people are allowed to play by a different set of rules,” Obama said Tuesday. “That doesn’t make sense.” Here's how that system currently works: Where are guns sold? According to the U.S. What does the background check entail? Gun violence pictures. National Institute of Justice.

According to the National Crime Victimization Survey, 467,321 persons were victims of a crime committed with a firearm in 2011.[1] In the same year, data collected by the FBI show that firearms were used in 68 percent of murders, 41 percent of robbery offenses and 21 percent of aggravated assaults nationwide.[2] Most homicides in the United States are committed with firearms, especially handguns.[3] Homicides committed with firearms peaked in 1993 at 17,075, after which the figure steadily fell, reaching a low of 10,117 in 1999. 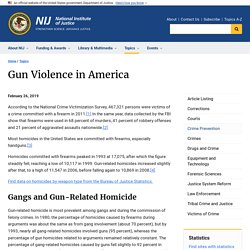 Gun-related homicides increased slightly after that, to a high of 11,547 in 2006, before falling again to 10,869 in 2008.[4] Find data on homicides by weapon type from the Bureau of Justice Statistics. Gangs and Gun-Related Homicide Gun-related homicide is most prevalent among gangs and during the commission of felony crimes. Nonfatal Firearm-Related Crime. More Guns Do Not Stop More Crimes, Evidence Shows. After I pulled the trigger and recovered from the recoil, I slowly refocused my eyes on the target.

There it was—a tiny but distinct circle next to the zombie's eye, the first bullet hole I'd ever made. I looked down at the shaking Glock 19 in my hands. A swift and strong emotional transformation swept over me. In seconds, I went from feeling nervous, even terrified, to exhilarated and unassailable—and right then I understood why millions of Americans believe guns keep them safe. I was standing in a shooting range 15 miles south of Kennesaw, Ga., a place known as “America's Gun City” because of a law requiring residents to own firearms. Guns took more than 36,000 U.S. lives in 2015, and this and other alarming statistics have led many to ask whether our nation would be better off with firearms in fewer hands.

After all, since 1991 Americans have acquired 170 million new guns while murder rates have plummeted, according to the National Rifle Association of America (NRA). Key Gun Violence Statistics. *Legal intervention is defined by the CDC as: deaths due to injuries inflicted by police or other law enforcement agents, including military on duty, in the course of arresting or attempting to arrest lawbreakers, suppressing disturbances, maintaining order, and performing other legal actions. 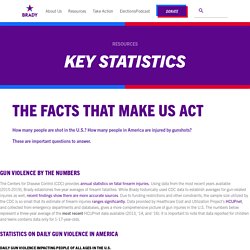 It excludes injuries caused by civil insurrections. Note: The data historically collected by the federal government on fatal shootings is not comprehensive. CDC data on cause of death relies on the National Vital Statistics System (NVSS). The NVSS tends to misclassify police involved shootings as homicides if law enforcement intervention is not mentioned on death certificates. Further, the US Federal Bureau of Investigation (FBI) does not require local police departments to give full information about officer involved shootings as part of its homicide reports, and participation in the Uniform Crime Reporting System is voluntary. Should More Gun Control Laws Be Enacted in the United States? - Pro & Con Quotes - ProCon.org. APA (6th ed.): ProCon.org. (2017, August 1). 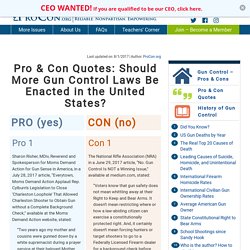