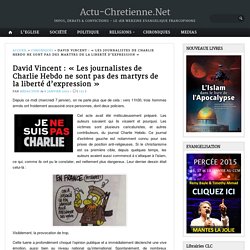 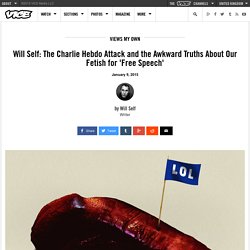 Will Self author photo by Valerie Bennett. Let me be clear: the people responsible for murdering the journalists at the offices of Charlie Hebdo on January 7th were the men who pulled the triggers of the Kalashnikovs aimed at them. Moreover, we've no need to reach into our grab-bag of ethical epithets in order to find one that fits these men's characters; we don't need to speak of "barbarism", or a "complete lack of civilised values", or agonise about how they became radicalised – because we know the answer already – but what we can unequivocally assert is that these men, in those rattling, coughing, cordite-stinking moments, were evil. Be glad someone had the courage to be Charlie. The magazine’s leaders were the kind of brave people who actually change the world e ne suis pas Charlie. 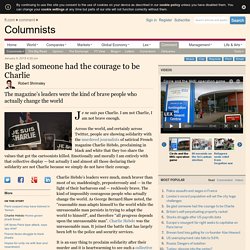 I am not Charlie, I am not brave enough. Across the world, and certainly across Twitter, people are showing solidarity with the murdered journalists of satirical French magazine Charlie Hebdo, proclaiming in black and white that they too share the values that got the cartoonists killed. Lost in translation: Charlie Hebdo, free speech and the unilingual left. Why We Must Resist Simple Explanations of the ‘Charlie Hebdo’ Massacre. Tidy stories reducing the atrocity to a clash of civilizations or a problem with integration are neither enlightening nor satisfying. 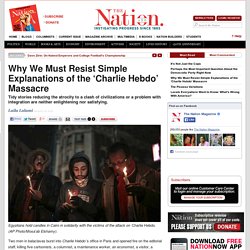 Egyptians hold candles in Cairo in solidarity with the victims of the attack on Charlie Hebdo. (AP Photo/Mosa'ab Elshamy). Two men in balaclavas burst into Charlie Hebdo’s office in Paris and opened fire on the editorial staff, killing five cartoonists, a columnist, a maintenance worker, an economist, a visitor, a copy-editor and two police officers. White House Stands By Earlier Criticism of Charlie Hebdo. The White House Monday refused to back away from its pre-Paris-attack criticism of the magazine Charlie Hebdo’s exercise of free speech, claiming it was meant as some kind of defense of our troops. 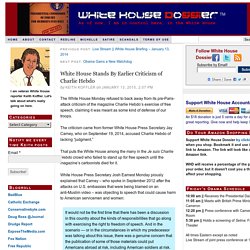 The criticism came from former White House Press Secretary Jay Carney, who on September 19, 2014, accused Charlie Hebdo of lacking “judgment.” That puts the White House among the many in the Je suis Charlie Hebdo crowd who failed to stand up for free speech until the magazine’s cartoonists died for it. White House Press Secretary Josh Earnest Monday piously explained that Carney – who spoke in September 2012 after the attacks on U.S. embassies that were being blamed on an anti-Muslim video – was objecting to speech that could cause harm to American servicemen and women: Fighting for collective dignity. Why I am not Charlie. There is no “but” about what happened at Charlie Hebdo yesterday. 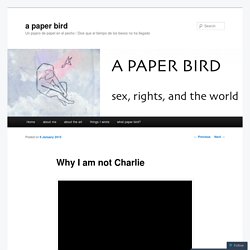 Some people published some cartoons, and some other people killed them for it. Words and pictures can be beautiful or vile, pleasing or enraging, inspiring or offensive; but they exist on a different plane from physical violence, whether you want to call that plane spirit or imagination or culture, and to meet them with violence is an offense against the spirit and imagination and culture that distinguish humans. Nothing mitigates this monstrosity. I Am Not Charlie Hebdo. The journalists at Charlie Hebdo are now rightly being celebrated as martyrs on behalf of freedom of expression, but let’s face it: If they had tried to publish their satirical newspaper on any American university campus over the last two decades it wouldn’t have lasted 30 seconds. 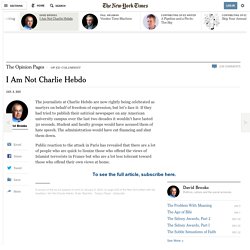 Student and faculty groups would have accused them of hate speech. The administration would have cut financing and shut them down. Public reaction to the attack in Paris has revealed that there are a lot of people who are quick to lionize those who offend the views of Islamist terrorists in France but who are a lot less tolerant toward those who offend their own views at home. Just look at all the people who have overreacted to campus micro-aggressions. The University of Illinois fired a professor who taught the Roman Catholic view on homosexuality. 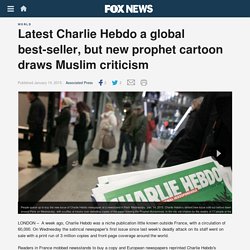 Charlie Hebdo's defiant new issue sold out before dawn around Paris on Wednesday, with scuffles at kiosks over dwindling copies of the paper fronting the Prophet Muhammad. In the city still shaken by the deaths of 17 people at the hands of Islamic extremists, a controversial comic who appeared to be praising the men was taken into custody. (AP Photo/Christophe Ena) (The Associated Press) A man reads Cumhuriyet, the leading pro-secular Turkish newspaper, in Istanbul, Turkey, Wednesday, Jan. 14, 2015. Cumhuriyet said police stopped trucks as they left its printing center to check the paper's content after it decided to print a selection of Charlie Hebdo caricatures.

Citizenship and U.S. Immigration. About the Course This course analyzes the historical origins of citizenship and immigration in the United States and provides an overview of modern U.S. law. 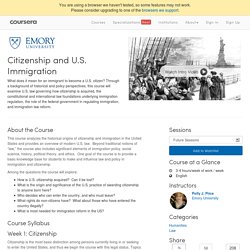 Beyond traditional notions of “law,” the course also includes significant elements of immigration policy, social science, history, political theory, and ethics. One goal of the course is to provide a basic knowledge base for students to make and influence law and policy in immigration and citizenship. Among the questions the course will explore: Latin American Migration from Coursera. Political Science. Michel Houellebecq Defends His Controversial New Novel. Photo by Sylvain Bourmeau It’s 2022, and France is living in fear. 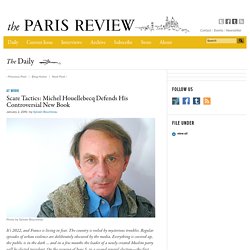 The country is roiled by mysterious troubles. Charlie Hebdo's Cartoons Were Racist, Not Satirical