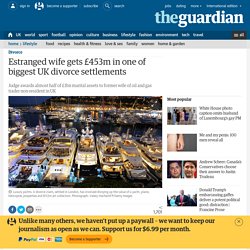 It confirms London’s status as the favoured location to bring divorce claims against super-rich spouses. The couple in the case were not identified by the family court judge, Mr Justice Haddon-Cave, but the man, 61, is originally from the Caucasus, while the woman, 44, was born in eastern Europe. Both were raised in Russia and met in Moscow in 1989, when she was studying in the city. He had been married before. The couple moved to London in 1993 and have two children. Woman 'trapped in loveless marriage' after judges refuse divorce. A woman says she has been left trapped in a “loveless and desperately unhappy” marriage after senior judges refused to allow her to divorce her husband of 40 years on the grounds of unreasonable behaviour. 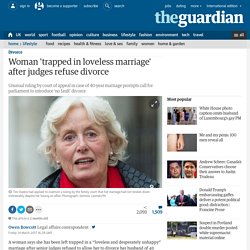 The highly unusual ruling by the court of appeal triggered calls from divorce lawyers for parliament to introduce “no fault” divorce and warnings that the decision would force separating couples to make more aggressive allegations to justify marital breakdown. Tini Owens, 66, who lives in Worcestershire, had applied to overturn a ruling by the family court that her marriage to her 78-year-old husband, Hugh, who is a retired mushroom farmer, had not broken down irretrievably despite her having an affair. Her husband opposed her application, denying the allegations made against him. Transgender woman denied contact with her ultra-Orthodox Jewish children. A transgender woman has been denied direct contact with her five children on the basis they would be shunned by their ultra-Orthodox Jewish community if she were allowed to meet them. 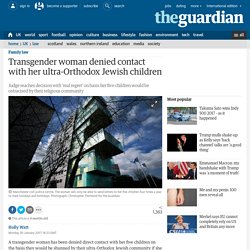 The woman will be allowed only to send letters to her children, after a judge concluded there was a real chance of “the children and their mother being marginalised or excluded by the ultra-Orthodox community” if face-to-face contact were permitted. Mr Justice Peter Jackson stated that he had reached the conclusion with “real regret, knowing the pain that it must cause”. The transgender woman – identified only as J – had brought the case seeking to have contact with the children. Family Law Overview. Family law concerns the rights and obligations of spouses, children, and other domestic relations. 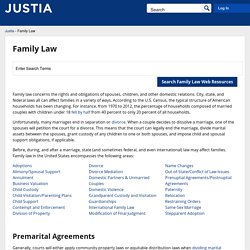 City, state, and federal laws all can affect families in a variety of ways. According to the U.S. Census, the typical structure of American households has been changing. Family law - Wikipedia. Family law (also called matrimonial law) is an area of the law that deals with family matters and domestic relations, including: See also[edit] Specific jurisdictions[edit] 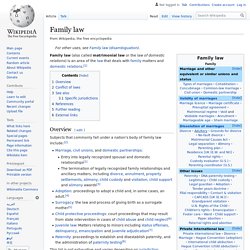