Take a Knee Military Meaning - Our Military. What are Tracer Rounds? - Our Military. Often in the news and military publications we read about military-grade weaponry but do not have a general understanding of what these weapons are, what they are capable of or why they are of military significance or use. 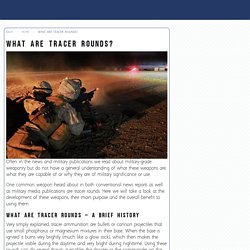 One common weapon heard about in both conventional news reports as well as military media publications are tracer rounds. Here we will take a look at the development of these weapons, their main purpose and the overall benefit to using them. What are Tracer Rounds – A brief History Very simply explained, tracer ammunition are bullets or cannon projectiles that use small phosphorus or magnesium mixtures in their base. When the base is ignited it burns very brightly (much like a glow stick), which then makes the projectile visible during the daytime and very bright during nighttime.

Tracer rounds were developed after the “spotlight” bullet (a bullet designed to flash or puff smoke on impact) became a violation of the Hague Convention. Air Force Bases in Texas. Why Are Marines Called Leathernecks? - Our Military. Leatherneck is a well-known and accepted term used to describe a U.S. 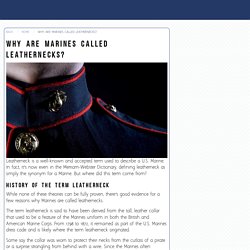 Marine. In fact, it’s now even in the Merriam-Webster Dictionary, defining leatherneck as simply the synonym for a Marine. But where did this term come from? History of the Term Leatherneck While none of these theories can be fully proven, there’s good evidence for a few reasons why Marines are called leathernecks. The term leatherneck is said to have been derived from the tall, leather collar that used to be a feature of the Marines uniform in both the British and American Marine Corps. Some say the collar was worn to protect their necks from the cutlass of a pirate or a surprise strangling from behind with a wire. Another theory as to why these almost 3-inch tall leather collars were worn was to keep a Marines head held high on parade. Still, there are other lesser known theories as to why Marines are called leathernecks.

Keeping the Tradition Alive The U.S. It persists in obvious ways, too. Navy OCS Acceptance Rate - Our Military. How Far is a Click in Military Terms? - Our Military. Fort Carson Zip Code - Our Military. Explaining The Rivalry Between an Army POG and a Grunt. What Do Marines Say in Response to Semper Fi? - OurMilitary.com. Marine #1: Semper Fi! 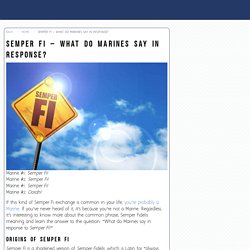 According to a heartfelt article on USMC Life, a Marine veteran of Bougainville and Guam summed up Semper Fi briefly when he said; “When I first went in the Marines, I thought Semper Fidelis meant ‘Always Faithful’. Apparently, this sentiment is spot on because Marines use Semper Fi in a variety of contexts. “It verbalizes esprit de corps and Gung Ho. Navy PRT Standards.

Military Bases in Texas - Our Military. As a valued beneficiary, your healthcare is top priority and we will do everything possible to make your visit with us pleasant and positive! 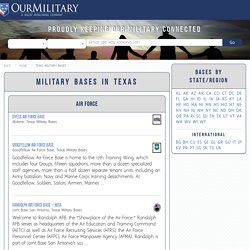 It is our intention to provide you and your family with prompt, courteous, and quality health care, and we will always treat you with respect, courtesy and compassion. If you ... The 7th Medical Group includes over 300 personnel dedicated to providing community health services to Team Dyess, expert Airman-medics to combatant commanders, and world-class medical and dental care to a population of nearly 20,000.

So, you love the water and you’re passionate about joining the military. 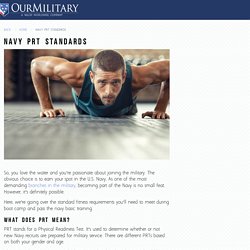 The obvious choice is to earn your spot in the U.S. Navy. As one of the most demanding branches in the military, becoming part of the Navy is no small feat. However, it’s definitely possible. Here, we’re going over the standard fitness requirements you’ll need to meet during boot camp and pass the navy basic training. What does PRT mean? PRT stands for a Physical Readiness Test. Also, to be clear, Navy PRT standards outline a baseline for what you should be able to do. You’ll be administered the Navy PRT at boot camp so it’s your responsibility to make sure you meet the standards before your arrival. But, before you freak out, the Navy PRT standards are low enough that you don’t have to be in peak physical condition when you enter boot camp.