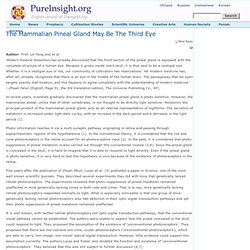 Lili Feng and et al 'Modern medical dissection has already discovered that the front section of the pineal gland is equipped with the complete structure of a human eye. Because it grows inside one's skull, it is thus said to be a vestigial eye. Whether it is a vestigial eye or not, our community of cultivators has reservations. In recent years, scientists gradually discovered that the mammalian pineal gland is photo sensitive. Photic information reaches it via a multi synaptic pathway originating in retina and passing through suprachiasmatic regions of the hypothalamus (1). Five years after the publication of Zhuan Falun, Lucas et al. (5) published a paper in Science, one of the most well known scientific journals.

It is well known, with neither retinal photoreceptors nor optic signal transduction pathways, that the conventional visual pathway cannot be established. How to fully activate Pineal Gland antennas (Drunvalo Melchizedek) AndreaPaperNewFormat(2).pdf (application/pdf Object)

BrianKelch5.pdf (application/pdf Object) Pineal Gland. The Meaning of the Pineal Gland. The pineal gland, a pine-cone shaped gland of the endocrine system, is a highly essential part of the brain necessary to our survival. 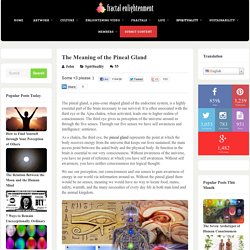 It is often associated with the third eye or the Ajna chakra, when activated, leads one to higher realms of consciousness. The third eye gives us perception of the universe around us through the five senses. Through our five senses we have self awareness and intelligence: sentience. As a chakra, the third eye, the pineal gland represents the point at which the body receives energy from the universe that keeps our lives sustained; the main access point between the astral body and the physical body. Its function in the brain is essential to our very consciousness. We use our perception, our consciousness and our senses to gain awareness of energy in our world via information around us. Melatonin is not only necessary for proper sleep, but it also regulates the onset of puberty and fight against harmful and free radicals. Resources: Decalcify Your Pineal Gland! A guided meditation to unblock your Ajna Chakra, Third Eye. Sudevi. 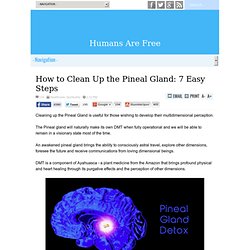 Cleaning up the Pineal Gland is useful for those wishing to develop their multidimensional perception. The Pineal gland will naturally make its own DMT when fully operational and we will be able to remain in a visionary state most of the time. An awakened pineal gland brings the ability to consciously astral travel, explore other dimensions, foresee the future and receive communications from loving dimensional beings.DMT is a component of Ayahuasca - a plant medicine from the Amazon that brings profound physical and heart healing through its purgative effects and the perception of other dimensions.

Thus it would appear human beings were intended to be visionary beings and be able to tap into the information in other dimensions. This dimensional perception transcends the ego and rapidly heals our sufferings, conflicts and thus karmas.Here are some basics for pineal detox:1. The pineal gland: your connection to the Universal Matrix. The Pineal Gland - The "Seat of the Soul"? Wonderful article, that needs to be shared! 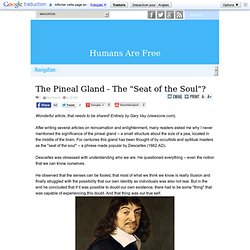 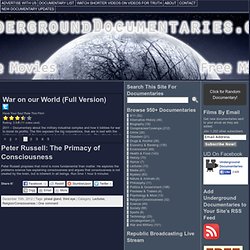 The film exposes the big corporations, that are in bed with the politicians, and push for war at every turn of geopolitical events. The ultimate aim is to inspire peace. Like this: Like Loading... Rating: 5.0/5 (1 vote cast) The Pineal Gland Is The Seat Of The Soul. What is the Pineal Gland? Ancient Egypt: Pineal Gland, Chakras. Pineal Gland Our Third Eye: The Biggest Cover-up In Human History. July 16, 2013 - The pineal gland (also called the pineal body, epiphysis cerebri, epiphysis or the “third eye”) is a small endocrine gland in the vertebrate brain. 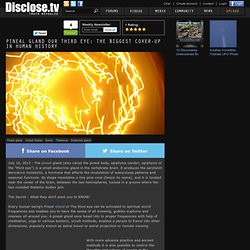 It produces the serotonin derivative melatonin, a hormone that affects the modulation of wake/sleep patterns and seasonal functions. Its shape resembles a tiny pine cone (hence its name), and it is located near the center of the brain, between the two hemispheres, tucked in a groove where the two rounded thalamic bodies join. The Secret : What they don’t want you to KNOW! Every human being’s Pineal Gland or The third eye can be activated to spiritual world frequencies and enables you to have the sense of all knowing, godlike euphoria and oneness all around you.

A pineal gland once tuned into to proper frequencies with help of meditation, yoga or various esoteric, occult methods, enables a person to travel into other dimensions, popularly known as astral travel or astral projection or remote viewing. - :Buddha. Five Health Tips to Decalcify the Pineal Gland. (By Pao L. 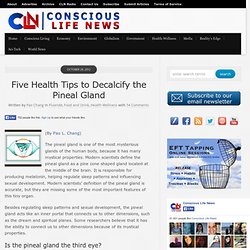 Chang) The pineal gland is one of the most mysterious glands of the human body, because it has many mystical properties. Modern scientists define the pineal gland as a pine cone shaped gland located at the middle of the brain. It is responsible for producing melatonin, helping regulate sleep patterns and influencing sexual development. Modern scientists’ definition of the pineal gland is accurate, but they are missing some of the most important features of this tiny organ. Besides regulating sleep patterns and sexual development, the pineal gland acts like an inner portal that connects us to other dimensions, such as the dream and spiritual planes. 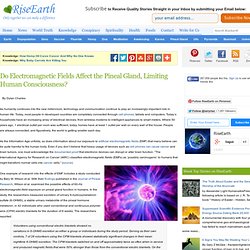 Today, most people in developed countries are completely connected through cell phones, tablets and computers. Today’s households have an increasing array of electrical devices, from wireless modems to intelligent appliances to smart meters. Where 50 years ago, 1 electrical outlet per room was sufficient, today, homes have at least 1 outlet per wall on every wall of the house. People are always connected, and figuratively, the world is getting smaller each day.

As the Information Age unfolds, so does information about our exposure to artificial electromagnetic fields (EMF) that many believe can be quite harmful to the human body. Volunteers using conventional electric blankets showed no variations in 6-OHMS excretion as either a group or individuals during the study period. Most recently, Malka N. Sources: Source: wakingtimes. 3rd Eye Chakra - Third Eye Meditation (Thoh Chant) Warning: This 3rd eye chakra meditation should only be performed by people, who know what they are doing and are absolutely sure that they want to open their 3rd eye chakra. 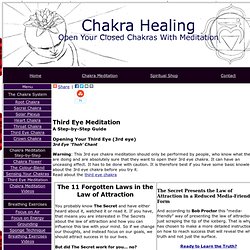 It can have an unceasing effect. It has to be done with caution. It is therefore best if you have some basic knowledge about the 3rd eye chakra before you try it. Step 1 Get Comfortable Find a Comfortable posture for you to sit in. Step 2 Shambhavi Mudra In this step you have to perform the shambhavi mudra, where you have to turn your eyes upward toward your 3rd eye chakra. Step 3 Mouth Position Take a deep breath through you nose. Forbidden Drugs that Activate the Third Eye(Pineal Gland) and Open Portals to the Demonic Realm. 98.7% Proven Meditation Technique: Open Your Third Eye in 15 Minutes. 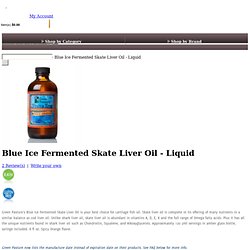 Unlike shark liver oil, skate liver oil is abundant in vitamins A, D, E, K and the full range of Omega fatty acids. Plus it has all the unique nutrients found in shark liver oil such as Chondroitin, Squalene, and Alkoxyglycerols. Blue Ice Fermented Skate Liver Oil is created with a proprietary cold process extraction and cleaning method to naturally enhance its nutritional value and assimilation.The fish used in Fermented Cod Liver oil and Skate Liver oil are exclusively wild caught in and around the Arctic region.