Ita: Legends of the Orishas. African Beliefs & Creation Myths. Earth Many African peoples regard the earth as a female deity, a mother-goddess who rules all people and is the mother of all creatures. 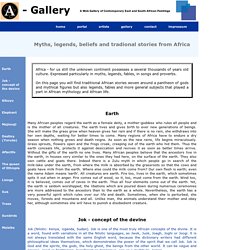 The earth lives and gives birth to ever new generations of beings. She will make the grass grow when heaven gives her rain and if there is no rain, she withdraws into her own depths, waiting for better times to come. Many regions of Africa have to endure a dry season when nothing grows and death reigns. As soon as the new rains, life begins miraculously. Jok - concept of the devine Jok (Nilotic: Kenya, Uganda, Sudan). Kikuyu The Kikuyus are a large tribe. Elephant Numerous myths are told in Africa about its biggest animal, the elephant, whose very size makes it unassailable in nature, except by man, who has weapons and magic to kill it. Majimaji In July 1905, rebellion broke out in the area south of Dar es Salaam (Tanzania), against the newly instituted recruitment for compulsory work on the German cotton and sisal plantations. 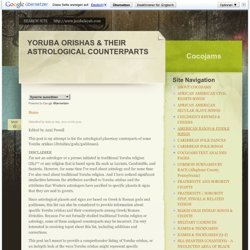 DISCLAIMER I'm not an astrologer or a person initiated in traditional Yoruba religion (Ifa)** or any religion that is based upon Ifa such as Lucumi, Candomble, and Santeria. However, for some time I've read about astrology and for some time I've also read about traditional Yoruba religion. And I have noticed significant similarities between the attributes ascribed to Yoruba orishas and the attributes that Western astrologers have ascribed to specific planets & signs that they are said to govern. Since astrological planets and signs are based on Greek & Roman gods and goddesses, this list can also be considered to provide information about specific Yoruba orishas and their counterparts among Greek/Roman divinities. Also note that I've listed more than one orisha for certain astrological planets. -snip- The Lukumí Pantheon: Orishas Signs and Aspects.

The deities or gods worshipped in Lukumí religion are called orishas. 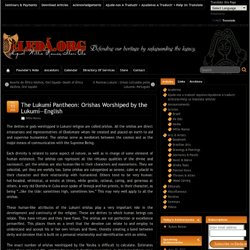 All the orishas are direct emanations and representatives of Olodumare whom He created and placed on earth to aid and supervise humankind. The orishas serve as mediators between the cosmos and as the major means of communication with the Supreme Being. Each divinity is related to some aspect of nature, as well as in charge of some element of human existence. The orishas can represent all the virtuous qualities of the divine and sacrosanct, yet the orishas are also human‑like in their characters and mannerisms. They are celestial, yet they are worldly too. These human‑like attributes of the Lukumí orishas play a very important role in the development and continuity of the religion. The exact number of orishas worshipped by the Yoruba is difficult to calculate. Many orishas were able to survive the trans‑Atlantic voyage and reinstate themselves in Cuba. Yewá was a daughter of Oduduwá. Orisha: Eshú-Elegbá (Elegguá)

Orisha Tools of Worship : Herramientas. The Orishas. The orishas are the emissaries of Olodumare or God almighty. 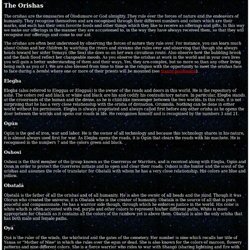 They rule over the forces of nature and the endeavors of humanity. They recognise themselves and are recognised through their different numbers and colors which are their marks, and each has their own favorite foods and other things which they like to receive as offerings and gifts. In this way we make our offerings in the manner they are accustomed to, in the way they have always received them, so that they will recognise our offerings and come to our aid. The orishas are often best understood by observing the forces of nature they rule over. For instance, you can learn much about Oshún and her children by watching the rivers and streams she rules over and observing that though she always heads toward her sister Yemayá (the Sea) she does so on her own circuitous route.

Elegba Elegba (also referred to Eleggua or Elegguá) is the owner of the roads and doors in this world. Ogún Ogún is the god of iron, war and labor. Oshosi Obatalá. Angelfire Orisha Links.