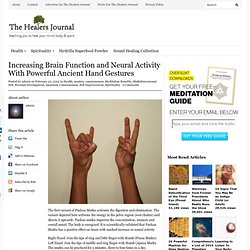 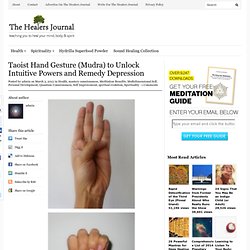 It is also called as exercise of three secrets. This mudra affects water element and all the organs associated with it, particularly the excretory organs like Kidney and Urinary bladder. Tse mudra increases magnetism, develops mental ability, sharpens intuition and let you get rid of depression. How to do Tse Mudra? Sit in a comfortable position. Inhale deeply and do a mental chant of OM seven times during the inhalation. Affirm that I am a divine being and capable of overcoming all obstacles. From Learning Days. Mudra for Improving Concentration and Self-Healing. Digg image courtesy of learning days Trimukha Mudra – Three Faced Mudra (Hand Gesture) Trimukha Mudra is a powerful, classical mudra that is performed with both hands in the configuration above. 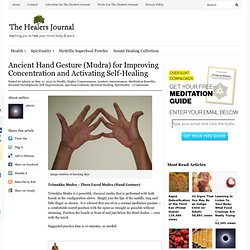 Simply join the tips of the middle, ring and little finger as shown. It is advised that you sit in a normal meditative posture — a comfortable seated position with the spine as straight as possible without straining. Suggested practice time is 10 minutes, as needed. Benefits of Trimukha Mudra Trimukah Mudra has long been recognized for the following benefits: Enhances/Supports spiritual advancement and achievementImproves concentration, focus and memoryRelieves or lessens headachesActivates and promotes the body’s innate self0healing mechanisms How it Works Mudras stimulate meridian points and connect specific energy pathways that run the length of the body and have terminals in the hands and fingers. Yogic Secrets for Higher Health and Consciousness: Working With Mudras (Hand Gestures) EmailShare HJ: Mudras are ‘hand gestures’, which when held for a specified period of time (typically 5-20 minutes), can have profound transformative effects on health and consciousness. 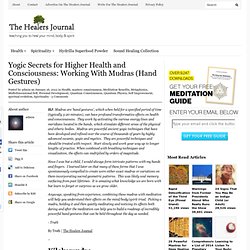 They work by activating the various energy lines and meridians located in the hands, which stimulate different areas of the physical and etheric bodies. Mudras are powerful ancient yogic techniques that have been developed and refined over the course of thousands of years by highly advanced swamis, yogis and mystics. They are powerful techniques and should be treated with respect. Start slowly and work your way up to longer lengths of practice. Since I was but a child, I would always form intricate patterns with my hands and fingers. Anyways, speaking from experience, combining these mudras with meditation will help you understand their effects on the mind/body/spirit triad. . - Truth By Truth | The Healers Journal Kilakamudra Technique: Cross the wrists with the hands back to back.