Crystal Caves - The Naica Mine of Chihuahua, Mexico. It's "the Sistine Chapel of crystals," says Juan Manuel García- Ruiz. 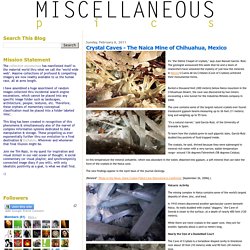 The geologist announced this week that he and a team of researchers have unlocked the mystery of just how the minerals in Mexico's Cueva de los Cristales (Cave of Crystals) achieved their monumental forms. Buried a thousand feet (300 meters) below Naica mountain in the Chihuahuan Desert, the cave was discovered by two miners excavating a new tunnel for the Industrias Peñoles company in 2000. The cave contains some of the largest natural crystals ever found: translucent gypsum beams measuring up to 36 feet (11 meters) long and weighing up to 55 tons. "It's a natural marvel," said García-Ruiz, of the University of Granada in Spain. To learn how the crystals grew to such gigantic sizes, García-Ruiz studied tiny pockets of fluid trapped inside. The crystals, he said, thrived because they were submerged in mineral-rich water with a very narrow, stable temperature range—around 136 degrees Fahrenheit (58 degrees Celsius).

The Healing Power of Crystals. Common Gem Chart. Crystal Grid. THE Crystal Chakra Chart. Crystal Healing Chart. Gem Essences and Gem Elixirs for Healing. Divinity expressing through nature has provided us grace through the forms of flowers and gemstones. 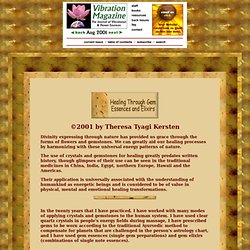 We can greatly aid our healing processes by harmonizing with these universal energy patterns of nature. The use of crystals and gemstones for healing greatly predates written history, though glimpses of their use can be seen in the traditional medicines in China, India, Egypt, northern Europe, Hawaii and the Americas. Their application is universally associated with the understanding of humankind as energetic beings and is considered to be of value in physical, mental and emotional healing transformations. In the twenty years that I have practiced, I have worked with many modes of applying crystals and gemstones to the human system.

I have finally arrived at focusing on the use of gem elixirs both internally and externally. Gemstones are best understood in terms of their qualities and applications through the study of their colors, growth patterns, and their mineral components. Living with Crystals is a Guide to the Use of Crystals for Meditation, Emotional Healing, Empowerment, and Spiritual Growth. We've been enjoying the companionship of the crystal kingdom since the mid-1980s and have been buying and selling crystals and teaching crystal classes since 1987. 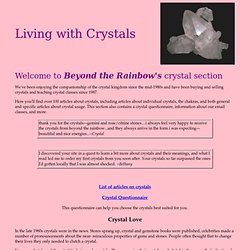 Here you'll find over 100 articles about crystals, including articles about individual crystals, the chakras, and both general and specific articles about crystal usage. This section also contains a crystal questionnaire, information about our email classes, and more. Crystal-Cure: Gemstone meaning. Color of Gemstones. A system of color description for gemstones The importance of an understanding, an appreciation, and a keen perception of color to a gemologist should be obvious. 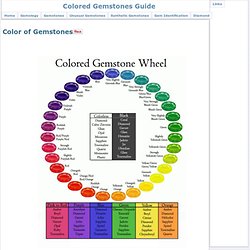 From this point forward in the study of colored gemstones, it is necessary to describe colors encountered in the various trade grades and varieties of the major species. Terms such as "apple green", "leaf green", "cerise", "mauve" and "scarlet" mean one thing to one person and something else to another. Thus, some standardized color-nomenclature system is essential to learn the color differences that determine desirability and relative value. Experience has proved that there are important dividends to the jeweler who makes a study of gemstone colors. Gem Hut- Gemstone Index.

Stones n Crystals. Master crystals specialty formations. There are new formations and purposes being identified all the time so this will of necessity be incomplete. 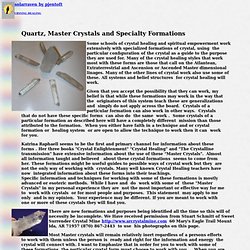 We Have received permission from Stuart Schmitt of Sweet Surrender Crystal Mine 60 Mary's Eagle Trail Mount Ida, AR 71957 (870) 867-2443 to use his photographs on this page. Most Master crystals will remain relatively inert regardless of a persons efforts to work with them unless the person is ready and right for the information and energy the crystal will connect with. I want to Emphasize that in order for you to work with some of these formations ,the particular crystal form must choose to work with you. When you are ready for a certain kind of work you often won't need a special crystal formation to do do it. The crystals themselves may also have a particular mission and purpose in their work for you than they will have for another person. Laser Wands & treatments Empowerment Workshops by Peggy Jentoft. Crystalsmexico. Seven Crystal Systems. Trigonal System As you will note in the photographs at left, this system is marked by its almost being a hexagonal shape...but not quite. 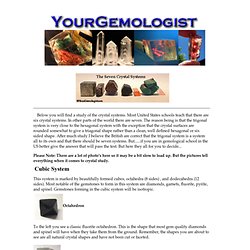 As noted in the main photo, the crystals will have a three sided termination. But as you look down the long or "C" axis of the crystal you will note that there are three distinct sides, that just barely fold over into a quasi-six sided crystal.