RobertMoss Dream Gates: An Explorers Guide to the Worlds of Souls, Imagination and Life Beyond Death. Psychopomp Intervention. Kelley Harrell: You Don't Call, You Don't Write... The Quiet Dead. During the Samhain season much emphasis is put on spirits, ghosts and things that go bump in the night. 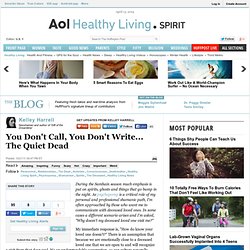 As psychopomp is a critical role of my personal and professional shamanic path, I'm often approached by those who want me to communicate with deceased loved ones. In some cases a different scenario arises and I'm asked, "Why doesn't my deceased loved one visit me? " My immediate response is, "How do know your loved one doesn't? " There is an assumption that because we are emotionally close to a deceased loved one that we are open to and will recognize a visit from that dear soul. It's an understandable assumption, as our culture generally sensationalizes and romanticizes interactions with the deceased.

Emotional involvement isn't the only impediment to visitation from beyond the grave. Our consciousness is organized into beliefs and personal truths so that we can make sense of data coming in. Another reason that the dead don't visit is simply because they have no need to. The Psychopomp or Death Walker. Psychopomp.

In Jungian psychology, the psychopomp is a mediator between the unconscious and conscious realms. 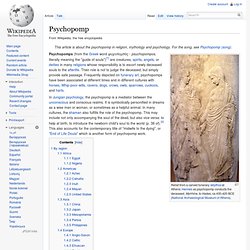 It is symbolically personified in dreams as a wise man or woman, or sometimes as a helpful animal. In many cultures, the shaman also fulfills the role of the psychopomp. This may include not only accompanying the soul of the dead, but also vice versa: to help at birth, to introduce the newborn child's soul to the world (p. 36 of).[2] This also accounts for the contemporary title of "midwife to the dying", or "End of Life Doula" which is another form of psychopomp work. By region[edit] The Spirit Gate, Shamanic Healing & Counseling: Death & Dying (Psychopomp) Death deities. Deathwalkers - help/information : Shamanism. Shamanic Guide To Death & Dying Paperbackby Kristin Madden. The Psychopomp. SOuL Searchers - Articles Many religious belief systems have a particular spirit, deity, demon or angel whose responsibility is to escort newly-deceased souls to the afterlife. 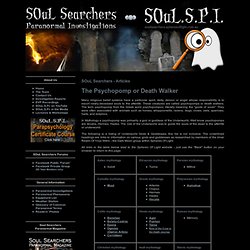 These creatures are called psychopomps or death walkers. The term psychopomp from the Greek word psychopompos, literally meaning the "guide of souls". They were often associated with animals such as horses, whippoorwills, ravens, dogs, crows, owls, sparrows, harts, and dolphins. In Mythology a psychopomp was primarily a god or goddess of the Underworld. The following is a listing of Underworld Gods & Goddesses, this list is not inclusive.

All links in the table below lead to the Spheres Of Light website - just use the "Back" button on your browser to return to this page. In Jungian psychology, the psychopomp is a mediator between the unconscious and conscious realms. Psychopomp, means "soul conductor". Psychopomps may have varying degrees of psychic abilities. The Deathwalker's Role. SOuL Searchers - Articles by Janine Donnellan A shaman is a conduit to the spirit world. 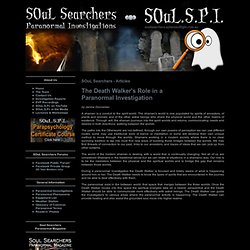 The shaman's world is one populated by spirits of ancestors, of plants and animals and of the other astral beings who share the physical world and the other realms of existence. Through will, the shaman journeys into the spirit worlds and returns, communicating needs and desires in both directions: walking between the worlds. The paths into the Otherworld are not defined; through our own powers of perception we can use different routes, some may use traditional tools of trance or meditation or some will develop their own unique method to move through the worlds. Contemporary Shamanism. The deathwalker is not a grim reaper; they are releasing that which is trapped, moving that which is beyond life, but not yet truly within the clutches of death. 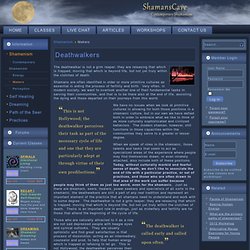 Shamans are often identified in older or more primitive cultures as essential in aiding the process of fertility and birth. Very often, in modern society, we want to overlook another one of their fundamental tasks in serving their communities, and that is to be there also at the end of life, assisting the dying and those departed on their journeys from this world. This is not Hollywood; the deathwalker perceives their task as part of the necessary cycle of life and one that they are particularly adept at through virtue of their own predilections. We have no issues when we look at primitive cultures in allowing for both those positions in a shamanic culture, but in our own we have defied both in order to embrace what we like to think of as more culturally sophisticated and civilized behaviors.

Seeing Energy Unravel Oh! Yes. Resources for The Modern Psychopomp, Death Midwife, Shaman, Guide to the Afterlife. Certain people seem to be born with an ability to help people cross over at the time of death, or assist those souls who need guidance after the transition. 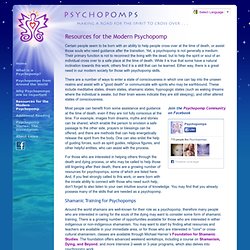 Yet, a psychopomp is not generally a medium.