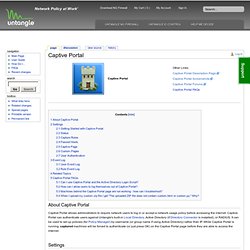 Captive Portal can authenticate users against Untangle's built-in Local Directory, Active Directory (if Directory Connector is installed), or RADIUS. It can be used to set up policies (for Policy Manager) by username (or group name if using Active Directory) rather than IP. Settings This section reviews the different settings and configuration options available for Captive Portal. Pre-authentication redirect URL - Aurora. How to Captive Portal Self Registration Using Free radius & Mysql (Tutorial) - Aurora. Okay this has me stumped for now..I reinstalled the computer as i386 pfsense instead of amd64 and what I have learnedfor some strange reason the error page works on the I386 version and not the amd64 version radtest seams to work fine it sends data to mysql so freeradius and mysql are working fine as it enter mysql data entries into it automatically if I install the radius data base with out reg_user table the self registration captive portal page see that it missing table and fails on registration .so captive portal seems to be configure correctly as the self registration webpage has access to the radius database because of the table error if If have the reg_user table imported. into radius database I no longer get an error. 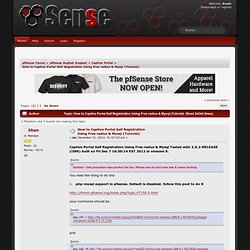 But it does not write anything into reg_user table upon completion of registration ( so it tells me i have no write capability or some sort un seen mysql error happening that prevents it from writing) Captive portal User self registration - Aurora. How to Set Up an NTP Server Using pfSense and OpenNTPD. Adding the Server Addresses To configure the NTP servers log into the web interface and access the general setup page found under the system menu. 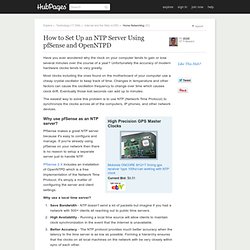 Enter the server DNS names or IP addresses of the NTP servers in the time server field, separate multiple servers with a space. In order for NTP to work properly you should add at least 3 different servers. Using less than three servers prevents NTPD from properly detecting a falseticker, which is basically an untrustworthy time source. The pfSense vendor pool consists of 4 different server addresses and I recommend adding all four of them. You can also use any other publicity available time servers as long as you have permission from the owner, in most cases the pool servers are the best choice.

Additional Settings The settings below can also be configured on the general settings page. DNS Servers I use OpenDNS servers because they are faster and more reliable than Roadrunner's name servers. Time Zone. How to Run Wireshark on pfSense Using X11 Forwarding Over SSH. Wireshark is a very useful tool for troubleshooting and analyzing network traffic. 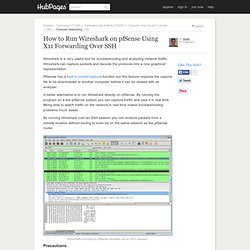 Wireshark can capture packets and decode the protocols into a nice graphical representation. PfSense has a built in packet capture function but this feature requires the capture file to be downloaded to another computer before it can be viewed with an analyzer. A better alternative is to run Wireshark directly on pfSense. By running the program on a live pfSense system you can capture traffic and view it in real time. Being able to watch traffic on the network in real time makes troubleshooting problems much easier. By running Wireshark over an SSH session you can analyze packets from a remote location without having to even be on the same network as the pfSense router. Precautions If you plan to do this installation on a production router or firewall you should make sure to do it during a maintenance window. I've tested this procedure on pfSense 2.0.1. 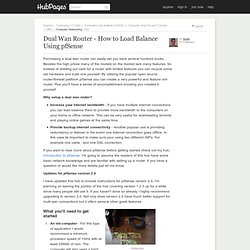 Interfaces I'm assuming during your initial pfSense setup you configured a LAN and one WAN interface already. To configure the second WAN interface select OPT1 from the Interfaces menu. Click the check box to enable the interface and set the type to either DHCP or Static depending on what you need, then hit Save. Load Balancer Next open the Load Balancer page found under Services. Note that pfSense will act strange if you have the same gateway for each interface. To check if your configuration is working goto Load Balancer under the status menu. Troubleshooting If the interfaces don't show up as online verify that your monitor IP will respond to ICMP pings. Final Configuration. Port Forwarding in pfSense - How to Configure NAT. In this hub I'll be showing you how to set up port forwarding or NAT on your pfSense router. 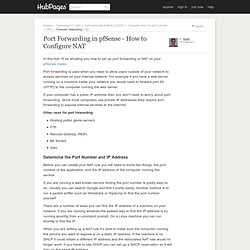 Port forwarding is used when you need to allow users outside of your network to access services on your internal network. For example if you have a web server running on a machine inside your network you would need to forward port 80 (HTTP) to the computer running the web server. If your computer has a public IP address then you won't need to worry about port forwarding. Since most computers use private IP addresses they require port forwarding to expose internal services to the internet. Other uses for port forwarding Hosting public game serversFTPRemote Desktop (RDP)Bit TorrentSSH.