Nature. STOP WOLF HUNTS. Wolf Education Projects. News and commentary on wildlife and public land issues in the Western United States. Northern Idaho Wolf Alliance. Fighting to Save An Endangered Breed, Jack Lynch Keeps a Pack of Hungry Wolves at His Door. At dusk, no stray lights or sounds of civilization disturb the tranquillity of Jack Lynch's homestead, a log cabin perched near the timberline in the Gallatin mountains of southern Montana. 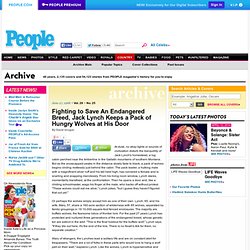 But as the snowcapped peaks in the distance slowly fade to black, a pack of wolves begins circling restlessly just behind the cabin. The pack leader, a hulking male with a magnificent silver ruff and his tail held high, has cornered a female and is snarling and snapping mercilessly. From his living room window, Lynch stares, momentarily transfixed, at the confrontation.

Then he opens a door and, like a chiding schoolmaster, wags his finger at the male, who backs off without protest. "These wolves could eat me alive," Lynch jokes, "but I guess they haven't figured that out yet. " Or perhaps the wolves simply accept him as one of their own. Wary of strangers, the Lynches lead a solitary life and are on constant alert for trespassers. A year later Lynch left his job to manage McCleery's sanctuary. 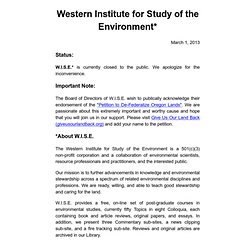 We apologize for the inconvenience. Important Note: The Board of Directors of W.I.S.E. wish to publically acknowledge their endorsement of the "Petition to De-Federalize Oregon Lands". *About W.I.S.E. The Western Institute for Study of the Environment is a 501(c)(3) non-profit corporation and a collaboration of environmental scientists, resource professionals and practitioners, and the interested public. Our mission is to further advancements in knowledge and environmental stewardship across a spectrum of related environmental disciplines and professions. W.I.S.E. provides a free, on-line set of post-graduate courses in environmental studies, currently fifty Topics in eight Colloquia, each containing book and article reviews, original papers, and essays.

The Wolf as a Predator: Wolf Control. The wolf kills to eat. 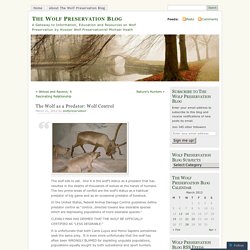 And it is the wolf’s status as a predator that has resulted in the deaths of thousands of wolves at the hands of humans. The two prime areas of conflict are the wolf’s status as a habitual predator of big game and as an occasional predator of livestock.In the United States, federal Animal Damage Control guidelines define predator control as “control…directed toward less desirable species which are depressing populations of more desirable species.” CLEARLY MAN HAS DEEMED THAT THE WOLF BE OFFICIALLY CERTIFIED AS “LESS DESIRABLE.”It is unfortunate that both Canis Lupus and Homo Sapiens sometimes seek the same prey.

It is even more unfortunate that the wolf has often been WRONGLY BLAMED for depleting ungulate populations, populations equally sought by both subsistence and sport hunters. Large-scale wolf kills by humans assume that wolves are the primary limiting factor to a hooved game population. Westernwolves.org - Home New. US appeals court allows wolf hunts. Tragic news…They CHANGED THE ENDANGERED SPECIES ACT to make this happen! 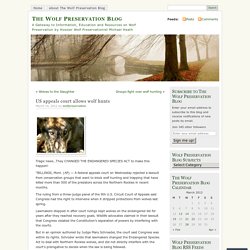 “BILLINGS, Mont. (AP) — A federal appeals court on Wednesday rejected a lawsuit from conservation groups that want to block wolf hunting and trapping that have killed more than 500 of the predators across the Northern Rockies in recent months. The ruling from a three-judge panel of the 9th U.S. Circuit Court of Appeals said Congress had the right to intervene when it stripped protections from wolves last spring.

Lawmakers stepped in after court rulings kept wolves on the endangered list for years after they reached recovery goals. But in an opinion authored by Judge Mary Schroeder, the court said Congress was within its rights. The amendment marked the first time Congress has forcibly removed a species’ endangered status. Michael Robinson with the Center for Biological Diversity, one of the groups that sued to restore protections, said a Supreme Court appeal was possible but no decision had been made. Howling For Justice. 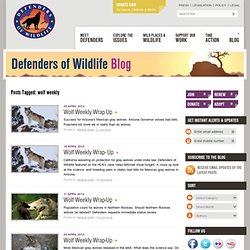