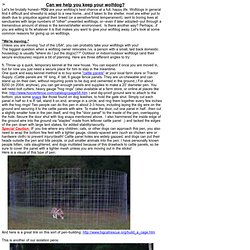 Wolfdogs in general find it difficult and stressful to adapt to a new home...and if taken to the shelter, most are either put to death due to prejudice against their breed (or a sensitive/timid temperament), sent to boring lives at sanctuaries with large numbers of *other* unwanted wolfdogs, or--even if later adopted--put through a tremendous amount of stress in the kennel/shelter environment. Is there another way? Perhaps...if you are willing to fix whatever it is that makes you want to give your wolfdog away. Let's look at some common reasons for giving up on wolfdogs. Your Calls Saved the Fox Mountain Mexican Wolf Mother. Photo credit: Cincinnati Zoo Dear Guardian, Thousands of people lit up the lines last Friday to the White House, the U.S. 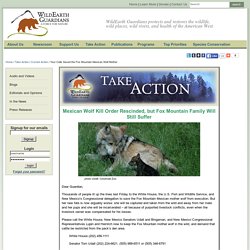 Fish and Wildlife Service, and New Mexico’s Congressional delegation to save the Fox Mountain Mexican mother wolf from execution. But her new fate is now arguably worse: she will be captured and taken from the wild and away from her mate and her pups and she will be incarcerated – all because of purported livestock conflicts, even when the livestock owner was compensated for his losses. Breeding en advice of wolfdogs, housing, nutrition, housing. The Wolf Dunn (hybrid wolf / wolf-dog cross info) Working Activities with Wolfdogs A unique new section showing a variety of activities 'owners' and their wolf-dogs engage in. 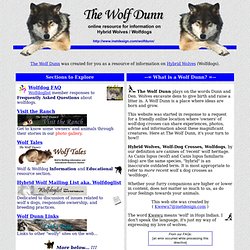 From ambassador wolves in schools, to therapy animals interacting with ill or elderly patients in hospital settings. Onwards to working-dog competitions, weight pulls, and canine packing in the backcountry. (Work In Progress) "Creative" Heritage Claims (misrepresentation) Poking fun at the wacky "creative" heritage claims breeders use to attempt to legitimize un-known lineages. AWIC Newsletter: The Wolf-Dog Hybrid. Animal Welfare Information Center Newsletter, Winter 1994/1995, Vol. 5 No. 4 An Overview of a Controversial Animal by Robert A. 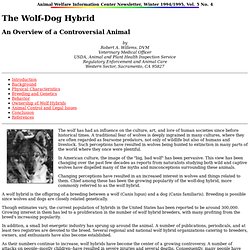 Willems, DVM Veterinary Medical Officer USDA, Animal and Plant Health Inspection Service Regulatory Enforcement and Animal Care Western Sector, Sacramento, CA 95827 The wolf has had an influence on the culture, art, and lore of human societies since before historical times. A traditional fear of wolves is deeply ingrained in many cultures, where they are often regarded as fearsome predators, not only of wildlife but also of humans and livestock. In American culture, the image of the "big, bad wolf" has been pervasive. Changing perceptions have resulted in an increased interest in wolves and things related to them. A wolf hybrid is the offspring of a breeding between a wolf (Canis lupus) and a dog (Canis familiaris). Though estimates vary, the current population of hybrids in the United States has been reported to be around 300,000.

Background Behavior. State laws regarding Hybrid cats, wolves, dogs and other animals. Section 671(c)(2)(K), Title 14, of the California Code of Regulations (page 8) The offspring of a restricted cat and domestic cat are not restricted. 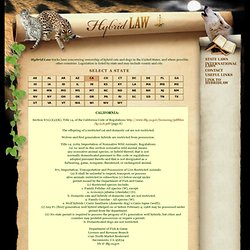 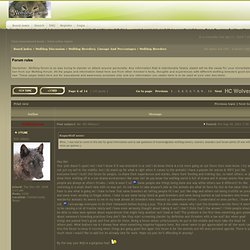 Cause I know I could file suit if I were some people mentioned in other areas and the comments couldn't be supported with more than an opinion or hearsay. It's slander by definition. Hi RogueWolf. I haven't posted anything in this thread until now, but I have read through it and I thought most of the posts addressed people's personal experiences with the breeder under discussion. I don't know this breeder and don't have anything negative against him, but I can verify one thing Pam said about raising prices after a buyer sent in a deposit....

Now, like many others here, I'm not trying to smear this breeder's name by any means, but what any breeder does (or does not do) should be discussed publicly, IMO, as it helps to keep them (or anyone working with the public--not just breeders, actually) honest and on the up and up in their dealings with people. State By State Laws For Wolf Dogs Wolf Hybrids Wolves - Wolf Hybrid Puppies For Sale Wolf Dog Puppies.

The Wolf Ranch is not responsible to constantly update this list with current state regulations. 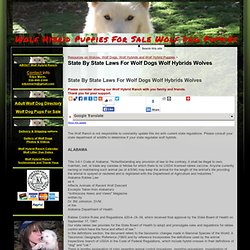 Please consult your state department of wildlife to determine if your state regulates wolf hybrids. Title 3-8-1 Code of Alabama. "Notwithstanding any provision of law to the contrary, it shall be illegal to own, maintain, sell, or trade any canidae or felidae for which there is no USDA licensed rabies vaccine. Anyone currently owning or maintaining such animal (as of 4/5/94) may keep the animal for the length of the animal's life providing the animal is spayed or neutered and is registered with the Department of Agriculture and Industries. "Alabama Rabies Law as it Affects Animals of Recent Wolf Descent Excerpts Taken from Alabama's "Anthrozoos News and Views" Magazine written by Dr.

"Possession of wolves in Arizona is prohibited without a permit. Harley the Hybridwolf. Www.howlingwoods.org/images/APHIS/University of Colorado Health Sciences Center.pdf. The Wolf Is At The Door, Inc.- In the news. Wolves, eagles poisoned in Bob Marshall Wilderness - Outdoors blog - Spokesman.com - Aug. 7.