The Impact Unpaid Internships Have On The Labor Market. Crain's Detroit Business : Subscription Center. The automation evolution in manufacturing. Emerging trends in the next phase of manufacturing’s evolution have already begun to alter the competitive landscape. 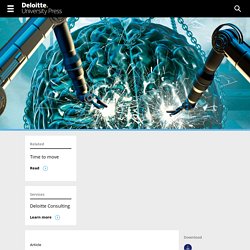 Labor arbitrage is ceding center stage to emerging production technologies and the associated talent models required to realize their potential. Companies that treat manufacturing as a strategic lever, rather than solely as a cost management exercise will likely be well positioned as the next generation of manufacturing takes hold. During a dinner attended by Silicon Valley leaders in 2011, President Barack Obama directed a question to then-Apple CEO Steve Jobs: What would be required to make Apple products in the United States?

When Mr. Jobs answered that “those jobs aren’t coming back,” did he mean that developed country manufacturing is a dying breed, or that the future of manufacturing is a more distributed model? How to offset the social costs of automation. Ken makes a decent living operating a large harvester on behalf of farmer Luke. 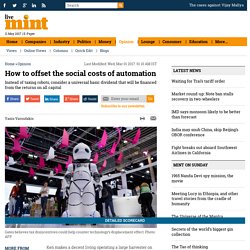 Ken’s salary generates income tax and social security payments that help finance government programmes for less fortunate members of his community. Alas, Luke is about to replace Ken with Nexus, a robot that can operate the harvester longer, more safely, in any weather, and without lunch breaks, holidays, or sick pay. Bill Gates thinks that to ease the inequality and offset the social costs implied by automation’s displacement effects, either Nexus should pay income tax, or Luke should pay a hefty tax for replacing Ken with a robot. Asia and the Pacific Job Training and Skills for Employment.

With focus and creativity the private sector can help bridge the jobs-skills gap for workers across Asia and the Pacific. 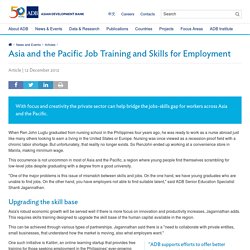 When Ren John Lugtu graduated from nursing school in the Philippines four years ago, he was ready to work as a nurse abroad just like many others looking to earn a living in the United States or Europe. Nursing was once viewed as a recession-proof field with a chronic labor shortage. But unfortunately, that reality no longer exists. So RenJohn ended up working at a convenience store in Manila, making minimum wage. We Need A New Social Contract Between Workers, Companies, And Society: Here Are Some Ideas.

The way we work today would be unrecognizable to the labor and corporate leaders of the past. 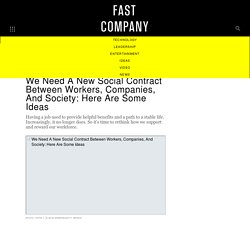 When the United Auto Workers and General Motors signed the “Treaty of Detroit” in 1950–the most influential labor contract of the 20th century–a job was something you did full-time for your whole life for a single company, and the arrangement came with generous health, unemployment, and pension benefits (not to mention guaranteed wage increases). Workers had to give up their independence and turn up at the same place every day at the same hours, but they were rewarded with a ticket to middle-class comfort.

Now such jobs are growing scarcer. Through Ray Kroc’s hamburger franchises, the growth of temp agencies like Kelly Girl (now Kelly Services), and particularly the outsourcing boom of the 1980s and 1990s, companies have found numerous ways to take “non-core” workers off their books and reduce their costs. Since job training works, why don't we have more of it? It's easier to hate Mexico and China. America's persistent problem: Not enough skilled workers - Aug. 7, 2015. On the surface, that's a good thing. 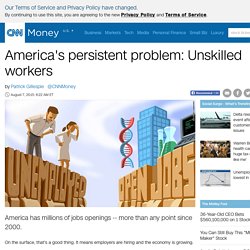 It means employers are hiring and the economy is growing. Deeper down though, a high number of job openings raises red flags because it means companies aren't finding the right people to fill the jobs. It signals a persistent problem in America's economy: the skills gap. Vacant jobs can cost companies hundreds of dollars a day in lost profits, research shows, and ultimately the job skills gap hurts America's economic growth. Cookies are Not Accepted - New York Times. Developing Workers: Community-based Job Training Brings Families Out of Poverty. As community development corporations (CDCs) strive to develop comprehensive strategies to help individuals and families in their communities, they are increasingly turning their attention to job training and placement programs, finding that living-wage jobs are critical to the health of every aspect of a community. 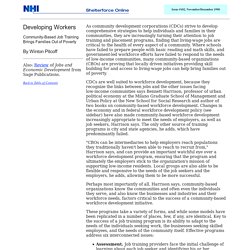 Where schools have failed to prepare people with basic reading and math skills, and government-led workforce efforts have failed to respond to the needs of low-income communities, many community-based organizations (CBOs) are proving that locally driven initiatives providing skill building for and access to living-wage jobs can help bring families out of poverty.

Perhaps most importantly of all, Harrison says, community-based organizations know the communities and often even the individuals they serve, and also know the businesses and industries and their workforce needs, factors critical to the success of a community-based workforce development initiative. Assessment. Watchmakers Take a Spin in Detroit's Past. Anatomy of Detroit’s Decline - Interactive Feature. Mayor Coleman A. Young of Detroit at an event in 1980. Richard Sheinwald/Associated Press The financial crisis facing Detroit was decades in the making, caused in part by a trail of missteps, suspected corruption and inaction. Here is a sampling of some city leaders who trimmed too little, too late and, rather than tackling problems head on, hoped that deep-rooted structural problems would turn out to be cyclical downturns.