ZBrush Interview: Dragon Age: Inquisition. In March of 2011, hot on the heels of the title's release we were pleased to bring you an interview with the art wizards at BioWare that worked on Dragon Age 2. 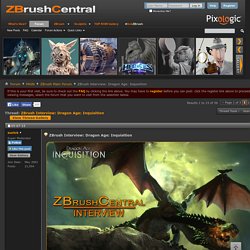 Six months before that we also posted an interview with them regarding Dragon Age: Origins. Both got rave responses from the community, so we have been eagerly awaiting the opportunity to talk with them about Dragon Age: Inquisition! Obviously, it wound up being a long wait. DA:I was built on a new engine (Frostbite) and was also the first BioWare title to come out for the new generation of consoles: Playstation 3 and Xbox One. Sans titre. Jeremy Klein's - DOTA 2 Workshop Thread - Page 5. ArtStation - Dota 2 sculpts, Max Aristov. Jesse Carpenter Art — WARFRAME. Bertrand saint martin. AntWatkins's DeviantArt Gallery. 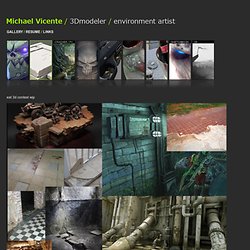 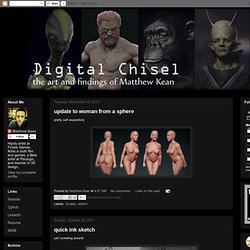 Okay no I don't haha, for you see on the 14th was my birthday, my 22nd to be exact, and boy do I feel old... Now being in New York at the time this weekend could mean only one thing: Thats right! New York Comic Con, and boy was it hectic. Sean Binder. Mike Nash. Castlevania. SC2 - Zb central. Sc 2 - deviantART. Troy. Games Starcraft 2 Heart of the Swarm: Drop Pod Hi Res In game model: View Full Res 2012: I modeled and textured these pods which appeared in the Cinematics for Heart of the Swarm. 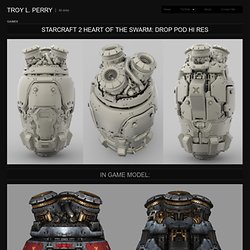 These are deployed from Battlecruisers to penetrate the defenses of enemy structures. Starcraft 2 Heart of the Swarm: Drop Pod Turntable Video: <p>[Javascript required to view Flash movie, please turn it on and refresh this page]</p> Dominic Qwek. Jessica Dinh. Brian Poche. Darksiders 2. With THQ dissolved and Austin's once prosperous Vigil studios rendered into a mere asset in a bankruptcy hearing (All employees were laid off following not finding a buyer this last week), former employees have started to upload their work to portfolio sites in preparation of finding a new job. 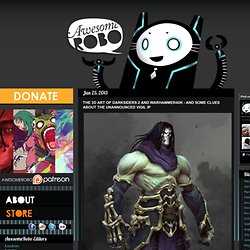 It's a shame to see the company go, because Darksiders 2 and other unreleased Vigil projects (Warhammer 40k, anyone?) Were shaping up to have some of the best art direction I've had a chance to experience in a long time. Following the departure of creative director Joe Madueira and some bad decisions on the part of THQ in regards to handling their companies, it definitely didn't pan out for studio's longevity. A good example of the types of decisions that ultimately sank THQ and marked the beginning of the end, the neutering of the Warhammer 40k: Dark Millenium Online into a single player experience. Denny Zunon. GrayGinther. ZB central. Ryan Jackson. Steven skidmore. Eric Spitler's Portfolio. Ben Lewis. ArtStation - Crystel Land. Yan Chan. Bobby Rice. Lazaruz. Cool rocks. ZB - Halo 4. Halo 4 by 343 Industries. 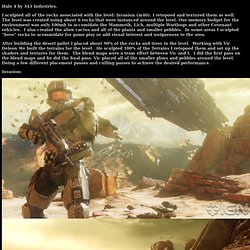 I sculpted all of the rocks associated with the level: Invasion (m40). I retopoed and textured them as well. The level was created using about 6 rocks that were instanced around the level. Our memory budget for the environment was only 100mb to accomidate the Mammoth, Lich, multiple Warthogs and other Covenant vehicles. I also created the alien cactus and all of the plants and smaller pebbles. After building the desert pallet I placed about 90% of the rocks and trees in the level. Liam Tart. This scene was built around a few foliage and terrain tests for Cryengine 3. 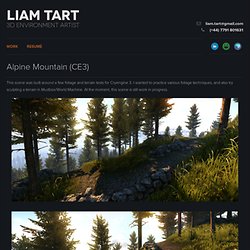 I wanted to practice various foliage techniques, and also try sculpting a terrain in Mudbox/World Machine. At the moment, this scene is still work in progress. The terrain was sculpted in Mudbox and then run through an erosion filter in World Machine. Great textures. Portfolio of Damian Lazarski. Ilya Nedyal. Piotr. Kopka. Alan Van Ryzin. 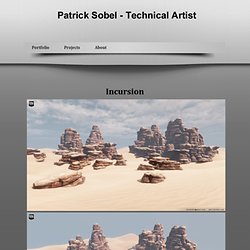 Originally, the rocks were supposed to be created in a hybrid kind of way consisting of both unique (shared) textures for general color information plus a volume enhancing normalmap and detail textures for close-ups. However, since our second level (Oasis) was cancelled due to time and personnel constraints and the actual level (Highway) showed merely any close-up at all, I ended up creating only the unique textures. All of the rocks share one set of textures (diffuse & normal) up to a 4096x4096 resolution; however, a much lower res would have been used in conjunction with detail maps. As far as the retopo is concerned, I obviously tried to keep the polycount as low as possible while in the same time maintaining the shapes of the silhouette as best as possible. Also, you might notice a significantly higher polygon density in some areas, some sort of crevices.