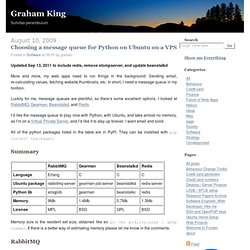 In short, I need a message queue in my toolbox. Luckily for me, message queues are plentiful, so there’s some excellent options. I looked at RabbitMQ, Gearman, Beanstalkd, and Redis. I’d like the message queue to play nice with Python, with Ubuntu, and take almost no memory, as I’m on a Virtual Private Server, and I’d like it to stay up forever. All of the python packages listed in the table are in PyPI. Summary Memory size is the resident set size, obtained like so: ps -Ao pid,rsz,args | grep <name>. RabbitMQ An all-singing all-dancing “complete and highly reliable Enterprise Messaging system”. PARLEY. Pub/Sub. SUBSCRIBE, UNSUBSCRIBE and PUBLISH implement the Publish/Subscribe messaging paradigm where (citing Wikipedia) senders (publishers) are not programmed to send their messages to specific receivers (subscribers). 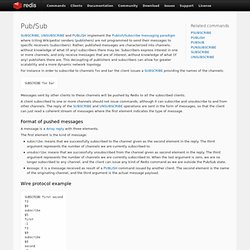 Rather, published messages are characterized into channels, without knowledge of what (if any) subscribers there may be. Subscribers express interest in one or more channels, and only receive messages that are of interest, without knowledge of what (if any) publishers there are. RestMQ - Redis based message queue. HotQueue — HotQueue 0.2.7 documentation. HotQueue is a Python library that allows you to use Redis as a FIFO message queue within your Python programs. 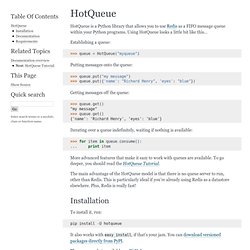 Using HotQueue looks a little bit like this… Establishing a queue: >>> queue = HotQueue("myqueue") Putting messages onto the queue: Getting messages off the queue: Iterating over a queue indefinitely, waiting if nothing is available: >>> for item in queue.consume():... print item More advanced features that make it easy to work with queues are available. The main advantage of the HotQueue model is that there is no queue server to run, other than Redis. Requirements. RQ: Simple job queues for Python. Gearman. SnakeMQ - message queuing for Python. Beanstalkd / Python Basic Tutorial - Standard Deviations. (First install beanstalkd and pybeanstalk ) Beanstalkd is an in-memory queuing system. It supports named queues (called ‘tubes’), priorities, and delayed delivery of messages. Terminology: a message is called a , and queues are called . Let’s look at an example scenario. Say you want to create 2 tubes, one called “orders” and another called “emails”, place orders into the first tube (or queue) and emails into the second, and have different processes handle orders and emails.

RabbitMQ - Messaging that just works. Pymq - A Python based Message Queue with transparent failover and queue distribution. A Persistent, Reliable Message Queue written in Python (and hence cross platform) which uses HTTP as the underlying transport. 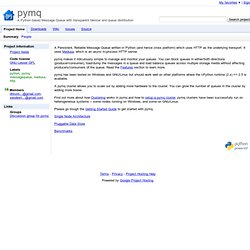 It uses Medusa, which is an async in-process HTTP server. pymq makes it ridiculously simple to manage and monitor your queues. You can block queues in either/both directions (producer/consumer), load/dump the messages in a queue and load balance queues across multiple storage media without affecting producers/consumers of the queue. Read the Features section to learn more. Alexcepoi/pyscale. About PyMW « PyMW. Introduction. 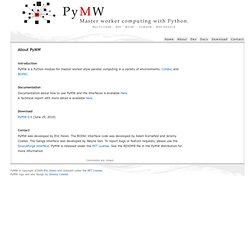 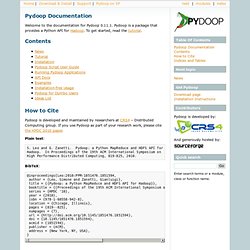 Pydoop is a package that provides a Python API for Hadoop. To get started, read the tutorial. Pydoop is developed and maintained by researchers at CRS4 – Distributed Computing group. If you use Pydoop as part of your research work, please cite the HPDC 2010 paper. Plain text: The Real Difference Between Mercurial and Git. There are a lot of otherblogposts and web sites comparing Mercurial and git. lot: sites: Some of them are just plain outdated or wrong (whygitisbetterthanx.com for example, lists “cheap local branching” as a git advantage over Mercurial, when Mercurial actually has cheaper branching than git!). VimWrapper - Freehackers. A flexible wrapper for Vim by Bluebird Introduction The goal of the VimWrapper project is to propose example implementations of Vim integration into other GUI environements (toolkits, IDE). 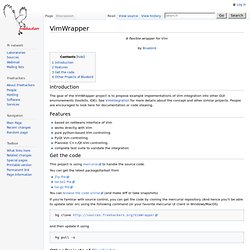 See VimIntegration for more details about the concept and other similar projects. People are encouraged to look here for documentation or code stealing. Features. Python binding for clutter-gtk and clutter-gsk. Basic stuff - Clutter. This section aims to teach clutter's principles, by example. 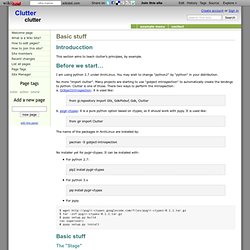 I am using python 2.7 under ArchLinux. You may wish to change "python2" by "python" in your distribution. No more "import clutter". Many projects are starting to use "gobject introspection" to automatically create the bindings to python. Clutter is one of those. From gi.repository import Gtk, GdkPixbuf, Gdk, Clutter. Python: Embedding a Virtual Terminal in a GTK widget with python vte library. Python-vte bindings allow you to embed a simplistic virtual terminal in any of your GTK apps real easy. 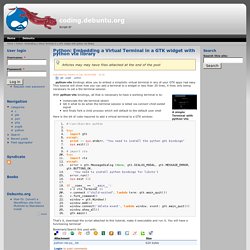 This tutorial will show how you can add a terminal to a widget in less than 30 lines, 4 lines only being necessary to set a the terminal session. Liftoff/GateOne. GtkClutter PyGobject. Clutter-gtk - Clutter integration with GTK+ Rfoo - Fast Python RPC package. Rfoo (remote foo) is a fast Python RPC package which can do 160,000 RPC calls per second on a regular PC. 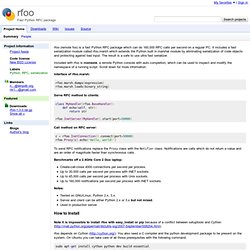 It includes a fast serialization module called rfoo.marsh which extends the Python built in marshal module by eliminating serialization of code objects and protecting against bad input. The result is a safe to use ultra fast serializer. Included with rfoo is rconsole, a remote Python console with auto completion, which can be used to inspect and modify the namespace of a running script. Arskom/spyne. Msgpack/msgpack-rpc-python. RPyC. Decorator for exposed function · Issue #70 · tomerfiliba/rpyc.