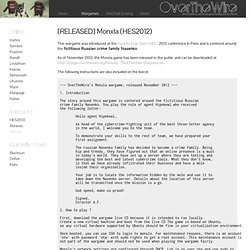 We are the 1%. This wargame was introduced at the Hackito Ergo Sum (HES) 2012 conference in Paris and is centered around the fictitious Russian crime family Nasenko. As of November 2012, the Monxla game has been released to the public and can be downloaded at - OverTheWire Wargame.iso The following instructions are also included on the livecd: SmashTheStack Wargaming Network. About Exploit Exercises. Fusion. About Fusion is the next step from the protostar setup, and covers more advanced styles of exploitation, and covers a variety of anti-exploitation mechanisms such as: Address Space Layout RandomisationPosition Independent ExecutablesNon-executable MemorySource Code Fortification (_DFORTIFY_SOURCE=)Stack Smashing Protection (ProPolice / SSP) In addition to the above, there are a variety of other challenges and things to explore, such as: Cryptographic issuesTiming attacksVariety of network protocols (such as Protocol Buffers and Sun RPC) At the end of Fusion, the participant will have a through understanding of exploit prevention strategies, associated weaknesses, various cryptographic weaknesses, numerous heap implementations. 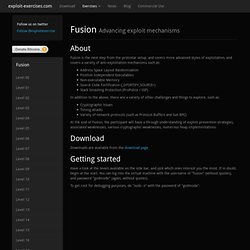 Download Downloads are available from the download page Getting started Have a look at the levels available on the side bar, and pick which ones interest you the most. p0wnlabs .:. Vulnerable Distros. The community has coughed up some classic distributions full of juicy targets and p0wnlabs is testing out a program to host them for your hacking pleasure. 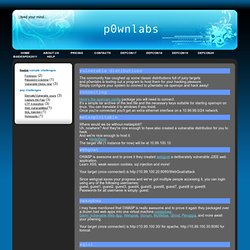 Simply configure your system to connect to p0wnlabs via openvpn and hack away! Here's the openvpn config package you will need to connect. It's a simple tar archive of the text file and the necessary keys suitable for starting openvpn on linux. You can translate it to windows if you insist. Once you're connected you'll get an extra ethernet interface on a 10.99.99.0/24 network. Where would we be without metasploit? Uh..nowhere? [Video] VulnImage - Automated Method. Links Watch video on-line: *Temporarily Disabled* Download video: Brief Overview VulnImage is an obscure (I can't even find a 'homepage' as such, for it!) 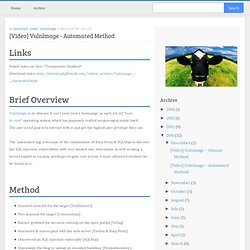 "boot-to-root" operating system which has purposely crafted weakness(es) inside itself. [Video] 21LTR - Scene 1. Using the information above, the attacker changes their IP address to match the one that was displayed on the page as well as continuously port scanning the target. 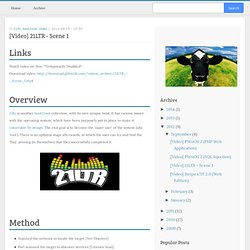 After waiting a while and monitoring the port scan results, the attacker notices that a port opens up after a while (Editor's note: You'll never have to wait more than 10 minute)! The attacker then stops the looped port scanner and starts to continuously trying to connect to the new port, TCP: 10001, for when it is to open again. By using 'Netcat' the attacker is able to create a RAW socket, thus allowing them to interact to any service that is running. Therefore, there will not be a clash/mix in incorrect services as it is unknown. Hack a Server. Malware Analysis Tutorial 1 - VM Based Analysis Platform. Learning Goals:Configure a virtual machine based experimental platform for malware analysis.Master basic network sniffing/monitoring skillsThis Lesson Can be Used as a Lab Module in:Computer Networks and Communication ProtocolsOperating SystemsChallenge of the day: Run the Max++ malware, can you describe its network activities? 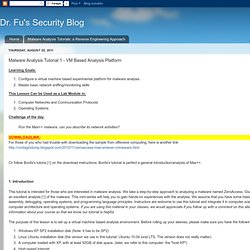 For those of you who had trouble with downloading the sample from offensive computing, here is another link: Or follow Bonfa's tutoria [1] on the download instructions. Bonfa's tutorial is perfect a general introduction/analysis of Max++. 1. This tutorial is intended for those who are interested in malware analysis. The purpose of this lesson is to set up a virtual machine based analysis environment. Windows XP SP2 installation disk (Note: it has to be SP2)Linux Ubuntu installation disk (the version we use in this tutorial: Ubuntu 10.04 lucid LTS. Malware Analysis Tutorial 11: Starling Technique and Hijacking Kernel System Calls using Hardware Breakpoints. Learning Goals:Understand hardware breakpointUnderstand vectored/structured exception handlingUnderstand the tricks that interrupt module loadingApplicable to:Operating Systems.Computer Security.Programming Language Principles.Assembly Language.1. 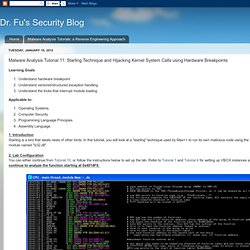 Introduction Starling is a bird that steals nests of other birds. In this tutorial, you will look at a "starling" technique used by Max++ to run its own malicious code using the "body" of another benign module named "lz32.dll". 2. Lab Configuration You can either continue from Tutorial 10, or follow the instructions below to set up the lab. Refer to Tutorial 1 and Tutorial 4 for setting up VBOX instances and WinDbg. 3. 3.1 Revisit of zwAllocateVirtualMemory Recall that in Tutorial 10, we showed you the trick how Max++ can invoke ntdll system calls without the use of export table.