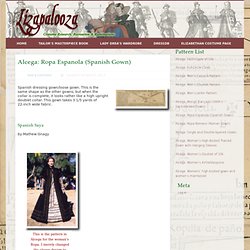 This is the same shape as the other gowns, but when the collar is complete, it looks rather like a high upright doublet collar. This gown takes 3 1/5 yards of 22-inch wide fabric. Spanish Saya. How to Apply Pearls and Beads in Smooth Lines. Brocade and pearls for the brustfleck German women in the 16th century were partial to putting pearls on their garments and accessories. 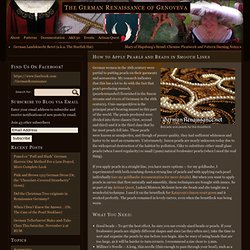 Clifford,Margaret(CDerby).jpg (2513×4183) A Who's Who of Tudor Women (W-Wh) Compiled by Kathy Lynn Emerson to update and correct her very out-of-date Wives and Daughters: The Women of Sixteenth-Century England (1984) NOTE: this document exists only in electronic format and is ©2008-14 Kathy Lynn Emerson (all rights reserved) ELIZABETH WADE see ELIZABETH ROLLESTON see ANNE SAUNDERS. 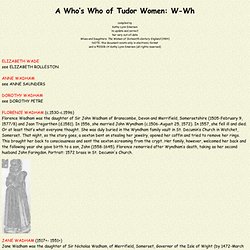 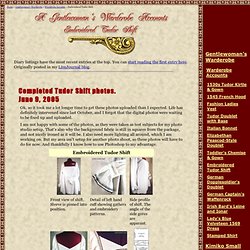 After all these years my old ones are dead or dying. One was more a partlet, but the pewter clasp on that one broke in half while in storage. Sheldon Tapestry Workshops. Object Type Gloves in the 16th and early 17th centuries were much more than just an accessory to fashionable dress. 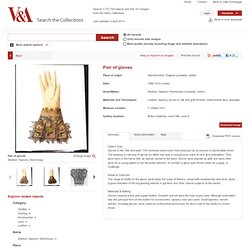 The wearing or carrying of gloves by either sex was a conspicuous mark of rank and ostentation. They were worn in the hat or belt, as well as carried in the hand. Gloves were popular as gifts and were often given by a young gallant to his favourite mistress. In combat, a glove was thrown down as a gage, or challenge. How to Make an Elizabethan Chemise. The chemise, called a "smock" or "shift" in the 16th century, was a simple garment was worn next to the skin to protect clothing from sweat and body oils. 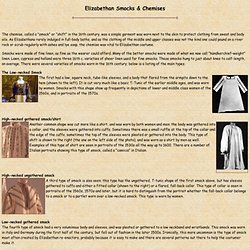 As Elizabethans rarely indulged in full-body baths, and as the clothing of the middle and upper classes was not the kind one could pound on a river rock or scrub regularly with ashes and lye soap, the chemise was vital to Elizabethan costume. Smocks were made of fine linen, as fine as the wearer could afford. Many of the better smocks were made of what we now call "handkerchief-weight" linen. Lawn, cypress and holland were three 16th c. varieties of sheer linen used for fine smocks. These smocks hung to just about knee to calf-length, on average. Calontir Trim - Fantastic Trims and Fantastic Prices - Fabric Trims of All Types and Styles for All Costumes and Apparel.

Realm of Regalia. Kimiko Sews - Mary Tudor's Wardrobe accounts, sample I. On a different note, because sarahbellem had asked for the accounts of Queen Mary Tudor of England, I pulled out my copy of Costume journal that has those accounts transcribed; what few accounts survived at the time of the research that was done. I got bored while the guys were playing Bakugon, so I started to read the entries.Mary Tudor's Wardrobe by Alison J. CarterCostume #18, 1984, pgs 9-28. Transcripts of the accounts start on pg 23. I mention this, because while I had read the accounts before, I hadn't paid too much attention to it since it fell outside of the time frame I had initially been working on. 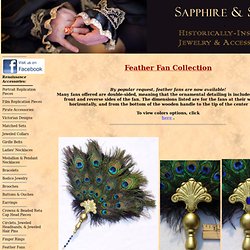 Many fans offered are double-sided, meaning that the ornamental detailing is included on both the front and reverse sides of the fan. The dimensions listed are for the fans at their widest part horizontally, and from the bottom of the wooden handle to the tip of the center feather. To view colors options, click here . The Costume Dabbler. By Lady Desamona Villani Book Reviews | Dress Diaries | Articles | Gallery The farthingale has a murky past. First known to be named, "verdugada", it was rumoured to have started with the concealing of a pregnancy from an indiscretion by the Spanish Queen, Juana de Portugal.

Even though it may have been true, the queen died in 1475, and the farthingale only begins to appear in paintings after that date. (1) Early depictions of farthingales in Spain do not seem to have had a standard design, resting heavily on fashion tastes and regional differences. Tudors - Costume. Early Tudor Costume Men Men's clothing gave them a square shape. they wore short doublets over their hose and the shoulders of their coat were cut wide. 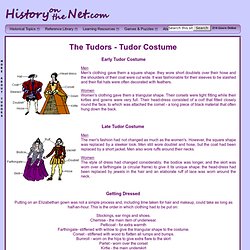 It was fashionable for their sleeves to be slashed and their flat hats were often decorated with feathers. Women Women's clothing gave them a triangular shape. Tudor Costumes and Textiles Links.  Tudor Links: Mapping Tudor England On The Web. British history from 1485 to 1603. We're spoilt for choice with sixteenth century costume sites! 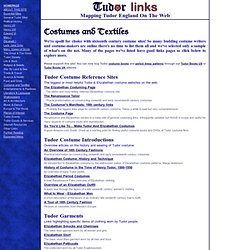 So many budding costume writers and costume-makers are online there's no time to list them all and we've selected only a sample of what's on the net. Many of the pages we've listed have good links pages so click below to explore more. Please support this site! You can now buy Tudor costume books and period dress patterns through our Tudor Books US or Tudor Books UK aStores. TUDOR TAILOR. Tudor dress: portfolio of images.