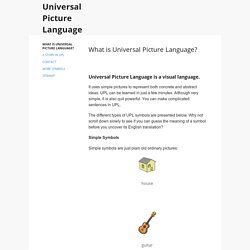 UPL can be learned in just a few minutes. Although very simple, it is also quit powerful. You can make complicated sentences in UPL. The different types of UPL symbols are presented below. Why not scroll down slowly to see if you can guess the meaning of a symbol before you uncover its English translation? Simple Symbols Simple symbols are just plain old ordinary pictures: house guitar helicopter me you Context Symbols The next type of symbol is called a "context symbol".

Nose hamburger sky shade mother. Nsibidi Writing System. The religious traditions of Africans forced to journey to America can be seen in the objects and symbols that remain in African American cemeteries today. 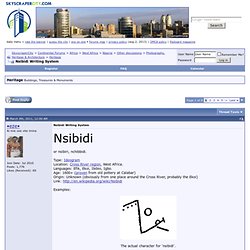 These artifacts suggest the strong and vibrant history of a people, who, in spite of the adverse conditions of slavery, found ways to perpetuate their heritage. They were able to retain their family traditions and religious commitments to the deceased, either by iconography or by more direct representation. This aesthetic developed from combining (or creolizing) writing systems, the particular use of color and asymmetric forms, and the making of objects for daily use. Content was associated with religious beliefs. Marks and objects in cemeteries that look merely decorative to the uninformed eye may be African signs and symbols.

A cemetery in George Washington National Forest in Amherst County, Va., is a good example. The stones were probably engraved between 1770 to 1830, when the Igbo Diaspora was at its height in Virginia. Sources for Iconic Language. Blissymbolics : Probably the most fully developed and widespread visual conlang. 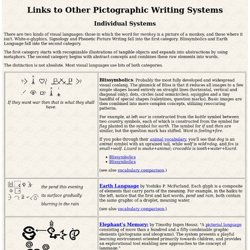 The gimmick of Bliss is that it reduces all images to a few simple shapes based entirely on straight lines (horizontal, vertical and diagonal only), dots, circles (and semicircles), squiggles and a tiny handful of special shapes (valentines, question marks). Basic images are then combined into more complex concepts, utilizing reoccuring patterns. For example, at left war is constructed from the battle symbol between two country symbols, each of which is constructed from the symbol for flag planted in the symbol for earth .

The symbol for if and then are similar, but the question mark has shifted. Want is feeling + fire . If you poke through their animal vocabulary , you'll see that dog is an animal symbol with an upraised tail, while wolf is wild + dog , and fox is small + wolf . (see also vocabulary comparison .) Egyptian hieroglyphs. Etymology History and evolution Hieroglyphs emerged from the preliterate artistic traditions of Egypt. 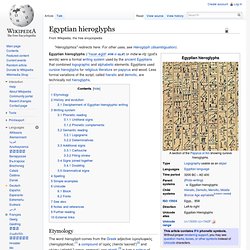 For example, symbols on Gerzean pottery from ca. 4000 BCE resemble hieroglyphic writing. In 1998, a German archaeological team under Günter Dreyer excavating at Abydos (modern Umm el-Qa'ab) uncovered tomb U-j of a Predynastic ruler, and recovered three hundred clay labels inscribed with proto-hieroglyphs, dating to the Naqada IIIA period of the 33rd century BCE.[5] The first full sentence written in hieroglyphs so far discovered was found on a seal impression found in the tomb of Seth-Peribsen at Umm el-Qa'ab, which dates from the Second Dynasty.

Introduction_pictography.pdf. Lepru alphabet. The Lepru (meaning simply 'the letters') alphabet was invented by Matt Youens for use in a fictional story he is writing. 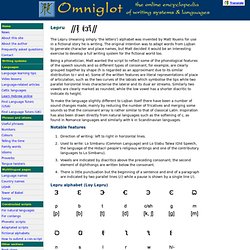 The original intention was to adapt words from Lojban to generate character and place names, but Matt decided it would be an interesting exercise to develop a full writing system for the fictional world too. Being a phonetician, Matt wanted the script to reflect some of the phonological features of the speech sounds and so different types of consonant, for example, are clearly grouped together by shape (h is regarded as an approximant due to its similar distribution to r and w). Some of the written features are literal representations of place of articulation, such as the two curves of the labials which symbolise the lips while two parallel horizontal lines characterise the lateral and its dual air streams. 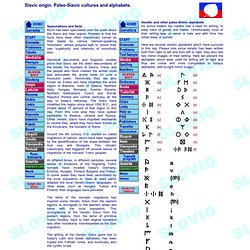 Much has been speculated over the years about the Slavs and their orginin. Problem is that the facts have been often intentionally turned on their heads by various German-speaking 'historians', whose purpose was to 'prove' their own 'superiority' and inferiority of everybody else. Historical documents and linguistic studies prove that Slavs are the direct descendants of the Veneti, the founders of Venice, Viena, and the people who have created the amber route and dominated the amber trade for over a thousand years.

Historically they are also known as Enetoi and have inhabited the entire region of Balkans, north of Greece, Northern Itally, Hungary, Romania, Austria, Bavaria, Northern Switzerland, Czech and Slovak Repulics Poland and central Germany all the way to today's Hamburg. The Slavs have inhabited this region since about 1500 B.C., and inhabit about 75 percent of that region to this day. Ostrogoths, Vandals. Venetic and other paleo-Slavic alphabets. Sources for Iconic Language.