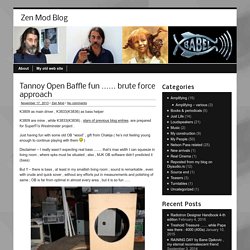 Just having fun with some old OB “wood” , gift from Chakija ( he’s not feeling young enough to continue playing with them Disclaimer – I really wasn’t expecting real bass ……. that’s max width I can squeeze in living room , where spks must be situated ; also , MJK OB software didn’t predicted it (bass) But !! – there is bass , at least in my smallish living room ; sound is remarkable , even with crude and quick xover , without any efforts put in measurements and polishing of same ; OB is far from optimal in almost every area , but it is so fun …..

So , here are first pics – due to room position and ,ahem,furniture – my bass helpers are actually more loaded as with U-frame ; Didn’t bother with simulation , bass is there , even with mediocre source and amplification and , certainly,more than temporary test xover . A Homebrew Horn for Tannoy - Статьи - Статьи - Articles - CLASSICAUDIO.RU. I consider myself to be very lucky. 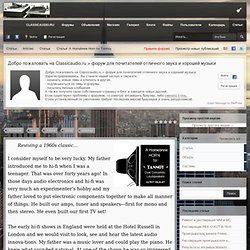 My father introduced me to hi-fi when I was a teenager. That was over forty years ago! In those days audio electronics and hi-fi was very much an experimenter’s hobby and my father loved to put electronic components together to make all manner of things. He built our amps, tuner and speakers—first for mono and then stereo. He even built our first TV set! The early hi-fi shows in England were held at the Hotel Russell in London and we would visit to look, see and hear the latest audio innova-tions. He was by then firmly committed to the sound of horns and he decided to try another approach using Tannoy dual concentric drive units.

Many years passed and when I cleared out the old house, I came across these drivers and they captured my imagination. Listening #125. Monday, January 14, was a difficult day for the abandoned amusement park that is my body. 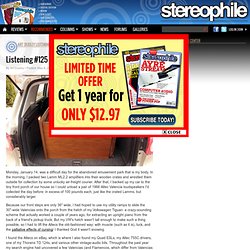 In the morning, I packed two Lamm ML2.2 amplifiers into their wooden crates and wrestled them outside for collection by some unlucky air-freight courier. After that, I backed up my car to the tiny front porch of our house so I could unload a pair of 1966 Altec Valencia loudspeakers I'd collected the day before: in excess of 100 pounds each, just like the crated Lamms, but considerably larger. Because our front steps are only 36" wide, I had hoped to use my utility ramps to slide the 30"-wide Valencias onto the porch from the hatch of my Volkswagen Tiguan: a crazy-sounding scheme that actually worked a couple of years ago, for extracting an upright piano from the back of a friend's pickup truck.

Anyone a Tannoy expert? - World-Designs-Forum. New Pair Hand Made Speaker Crossover for Tannoy Silver Red Gold HPD SRM Etc. I do travel, so check if I am away and next ship date. 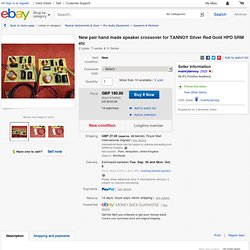 I normally ship Fri and Mondays, I will ship sooner if possible. Check if Paypal or bank transfer only. I am not responsible for any import duties in your country. Any problems must be raised within 7 days of delivery, NO EXCEPTIONS. ROYAL MAIL POST COST WHERE APPLICABLE ON SMALL PACKET ITEMS ... For UK courier shipments (like UPS), fully insured to £1000. For overseas Courier shipments, like UPS / FedEx etc, insurance cover is £50.

For sale Allow 2 to 3 weeks for assembly and test. Truefi: Tannoy speakers. In the last couple of month I have tried to find a solution for the incomparable 15'' Tannoy driver to be used in a sort of universal enclosure. 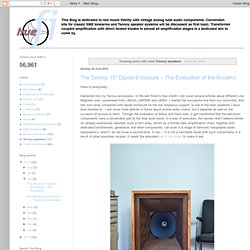 I concentrated on two nested main questions, the best possible response coming from a living room friendly sized cabinet. My main aim in this process was, independant from any technical design principle (i.e. reflex, open baffle, sealed, horn development), to archive a foremost natural tonal response. It is best described as a transformation of the electrical signal into a acoustic representation of music, lacking any typical electrical significance or sort of common compressions arising.

Analogue hifi wiki: Tannoy HPD-315A Crossover. This article is about the crossover for my HPD-315 driver units. 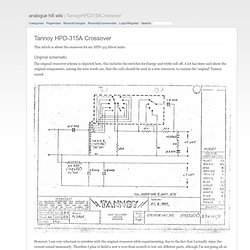 Original schematic The original crossover scheme is depicted here, this includes the switches for Energy and treble roll-off. A lot has been said about the original components, among the wise words are, that the coils should be used in a new crossover, to sustain the 'original' Tannoy sound. However, I am very reluctant to interfere with the original crossover while experimenting, due to the fact that I actually enjoy the current sound immensely. Tannoy Cheviots. Hi I acquired a pair of Chaviot's One owner from new , the gent who sold the said from memory he purchased them from Laskey's in Totenham court road in the mid 1970's , He had to save for ages as he was a student They have been through lots of relocation in the last 38 years , also residing in lofts when not in use due to space issues with a family taking priority So cosmetics are not mint and like Geoff's the plinths are in poor condition , the veneering is coming off the chipboard They need new foam rings fitted as you can see from the photos Question ? 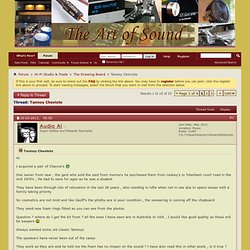 Where do I get the kit from ? All the ones I have seen are in Australia or USA , I would like good quality as these will be keepers Always wanted some old classic Tannoys The speakers have never been out of the cases They work as they are and he told me the foam has no impact on the sound ? I have also read this in other posts , is it true ? Anyway here are the photos . . . . . . . . . . . . . . . . . . April 2013. My own experiences around vintage tube audio components started in the late 1980ties. 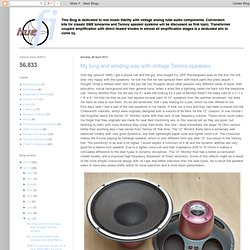 At this time I stayed frequently in London, most of the time in an apartment of a friend. The next underground station from there which I always used, was Edgeware Road Station. There in a little side street was shop located which had stacked old british amplifiers in its window up to the ceiling. The most of them were colored with golden paint, some as well were grey. Tannoy Cheviot Manual - HPD Loudspeaker System - HiFi Engine. Tannoy information page. Tannoy SRM-12X Crossover Schematic Wanted. Index. Tannoy Stirling Speakers For Sale - US Audio Mart.

Welcome to USAudioMart, a classifieds site for used audio, hifi and stereo. 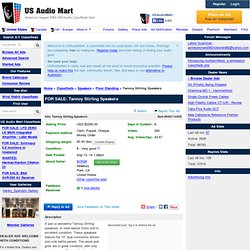 Tannoy Cheviot (HPD315) For Sale - US Audio Mart. Blogue de Sylvain Paquette's Blog. Tannoy cheviot, a review 33 years too late For the first time I have at home a pair of tannoy’s dual concentric speakers. 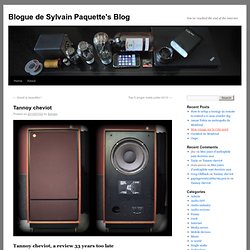 They are ugly and it’s done on purpose so you have to close your eyes while listening music. I’ve got them two weeks ago and started to play them for couple of days and quite liked what I heard. My new Tannoy HPD-385A Cabinets and Crossover Mods [Archive] - Club Polk. Four months ago I picked up my HPD's. At first they were kind of dull sounding. I then updated the crossovers with Solen Caps and Mill resistors. This was a vast improvement over what I was hearing. My mid still seemed to sound a little off, so I added some more foam and a couple pounds of polyfill to the enclosure. That fixed that problem, but now I was lacking bass. After a couple months of listening, something was bothering me about the sound of the speaker. AA Tannoy Cabinets. My new Tannoy HPD-385A Cabinets and Crossover Mods [Archive] - Club Polk.

The effect of this is that the wave front area varies with frequency, giving an outstanding illusion of realism to both solo and orchestral music. In addition, the system has all of the well known advantages of horn loading (eg: excellent bass radiation and transient response, but none of the spacial distribution defects associated with conventional horns or multispeaker systems. The low frequency diaphragm of the 15-inch Dual Concentric Loudspeaker is rear horn loaded down to 30 Hz, while between 350 Hz and 1,000 Hz a new acoustic coupling device gives much improved front radiation.

The GRF enclosure is a fitting compliment to the 15-inch Dual Concentric Loudspeaker, when the highest standard of performance is required. Technical Specification Frequency Response: 30 Hz to 20,000 +/- 3dB Power Handling: 50 Watts.